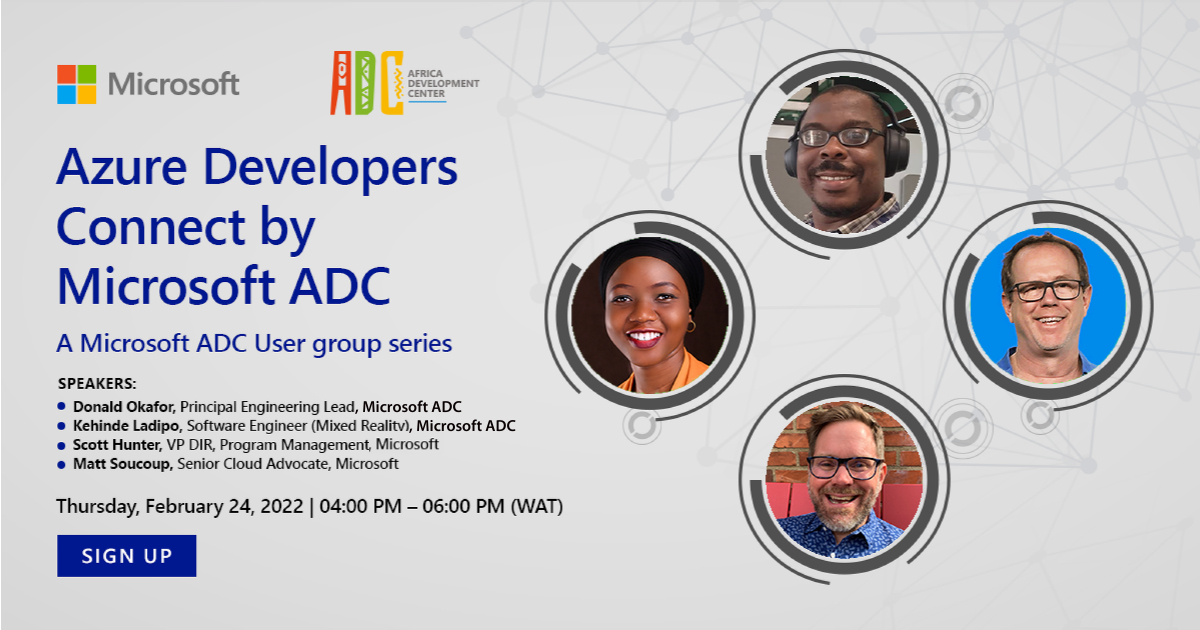 The much-publicised Azure Developers Connect by Microsoft ADC was held on Thursday, February 22, 2022. The event delivered on its goals which were to expose software developers, engineers, tech communities, etc., to the many capabilities of Azure for building next-gen apps and driving global transformation as a developer or software engineer in Africa and create an avenue for networking, among others.

The event was opened by moderators, Oluwamuyemi Orimolade, Marketing & Communications, Microsoft ADC and Titilayo Odunsi who welcomed everyone in attendance.

Oluwamuyemi gave a brief history of Microsoft ADC and its purpose, which includes building an ecosystem of African talents, driving innovation, among others.

Scott Hunter, VP Director of Program Management, Microsoft on Azure Developer Experience and .NET, started the first practice session. He demonstrated how to work on continuous integration/deployment (CI/CD) using Microsoft Azure and gave more insights into Github and how it is associated with Azure.

The second practice session led by Matt Soucoup, a Senior Cloud Advocate at Microsoft, showed a faster method of creating Azure functions. Matt went on to provide answers to questions asked by some of the attendants.

The fourth session of the event saw Kehinde Ladipo, a software engineer at Microsoft mesh team, speak on the similarities and differences between Azure Resource Manager (ARM) templates and Bicep. She noted that Bicep, a domain-specific language (DSL), is relatively new and comparably easier to work with.

A session that talked about recruitment and opportunities in Microsoft, was led by Yinka Coker, Technical Recruiter at Microsoft. He spoke about the recruitment phases and advised prospective applicants on application processes and tips to get their résumés updated and in order. Links to career sites were shared by Yinka and other members of the Talent Recruitment team.

A question and answer session that had Adora Nwodo, Olaitan Adeboye, Samuel Adranyi and Frank Odoom as panelists helped to give important information and shed more light on the diverse possibilities and use cases of Microsoft Azure.

Prizes were won at the end of the event. The comment section was well utilised for networking and answering of questions by speakers and attendants. The event ended with a vote of thanks from the organisers and a call for more exploration of the Azure platform.

About Microsoft Africa Development Center (ADC)Microsoft Africa Development Center (ADC) represents Microsoft’s first-ever engineering offices in Africa, with locations in Lagos, Nigeria and Nairobi, Kenya. These centers were created by Microsoft to serve as a base for African industry leaders to create local solutions with global scalability as well as provide employment opportunities and further enhance technological innovations in the continent of Africa.