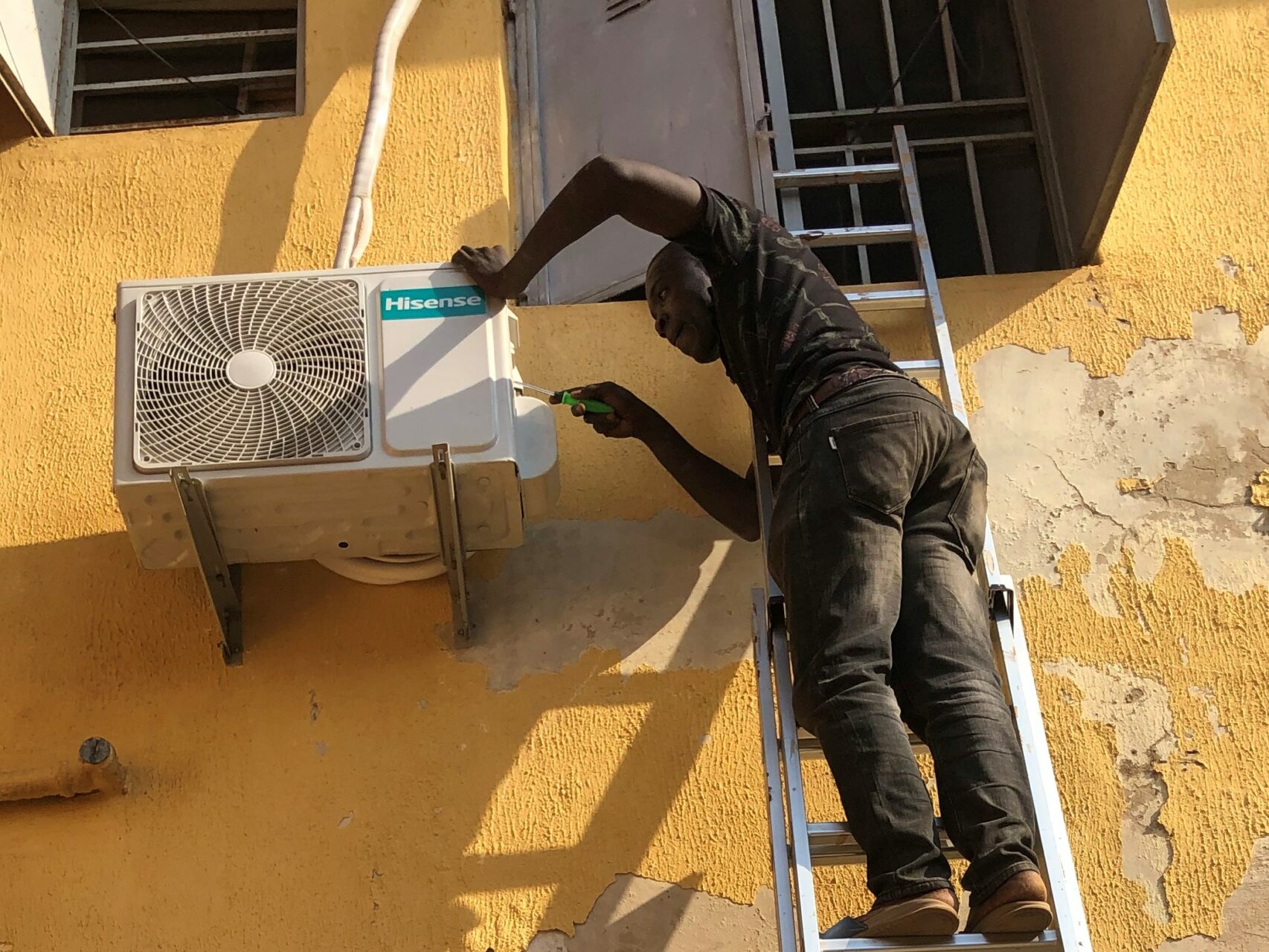 Have you ever walked into a room and immediately started sweating bullets? Have you spent time in a room with air-conditioners that blow hot air?

Then you would quite understand why I was happy when last year, after a lot of convincing and back and forth, my mom finally agreed to get two air-conditioners installed in the house. But, unfortunately, it gets incredibly hot in the dry season even though there are huge windows everywhere. So we contacted a former neighbour that sells used ACs, paid three-quarters of the money, and had him deliver them to the house.

After the delivery and installation by Udoka, a very cheerful and outspoken “AC installer”, trouble started. The ACs were not cooling. Udoka was called back several times, the gas was filled and refilled, one split AC exchanged for a standing one, a total of four technicians worked on the cooling units, one AC unit almost caught on fire.

Several months later, my parents had spent more than ₦250,000 ($524.1)* on ACs that never worked. They are still in the house, an immutable reminder of wasted money and time, and perhaps, another reason to be continually disappointed in Nigerian artisans.

It’s why when we were asked to pitch possible stories for an article, the event “World Refrigeration Day” caught my attention. I was increasingly interested when I saw that this year’s theme was “Cooling Champions: Cool Careers for a Better World.”

I was immediately transported back to the emotions I felt during the AC installation and repair saga. But, rather than focus on my frustrations, I began to ask questions. What would it take to start a career in the refrigeration industry? How much would it cost? What kind of tools and technology make the work easier?

It was the idea of refrigeration consultant, Stephen Gill, former President of the Institute of Refrigeration in the UK. It quickly caught on in its first year, with more than 800 physical events held in 153 countries around the globe.

According to the World Refrigeration Day Secretariat, more than 15 million people are employed worldwide in the refrigeration sector, while the total number of refrigeration, air-conditioning, and heat-pump systems in operation worldwide is around 5 billion.

Quite impressive statistics, but I was curious about how much of it Nigeria’s economy accounts for, especially for the average AC or refrigerator technician.

I spent some time with Emmanuel to try to answer this, and you’ll find details below.

Emmanuel is an AC technician who runs Ipese Oluwa Technologies, a business in the student town of Ile-Ife, Osun State. The young entrepreneur graduated from the prestigious Obafemi Awolowo University, Ile-Ife, as a physicist in 2014.

Just like many OAU alumni before him, he saw a problem and decided to solve it. Before leaving school, he was already working as a cable TV installer. However, customers began to ask if he could repair ACs. Seeing the business opportunity, he decided to learn.

Currently, Nigeria has 78 approved and accredited Vocational Enterprises Institutions (VEIs), with the latest getting approval in 2019. However, only two teach Refrigeration and Air-conditioning Practice, with a two or three-year study option. Some of these institutions give scholarships in conjunction with partners, but the rest require payment.

Interestingly, Emmanuel didn’t go down this route. Instead, he chose to learn from technicians in Ile-Ife and Benin City, Edo State. In 2014, he undertook the course for one and a half years and paid roughly ₦170,000 ($1062.5)** to learn but claims to have understood the basics in two weeks.

Apart from the traditional training, Emmanuel uses YouTube and Google as additional learning tools. For him, they are even more helpful than the conventional training.

“I learn so many things. I watch clips with different styles. It is very helpful,” he says.

After watching several hours of AC installation and work tools videos on YouTube myself, I am inclined to agree. But, interestingly, Nigerians are yet to join the DIY video trend.

Tools of the trade

An AC technician requires several important tools to get his work done — wrenches, pipe bending tools, manifold gauge, pliers, a pen and paper, protective equipment, and so on.

For Emmanuel, though, certain tools that would make his work easier include a vacuum pump, a drill and a Hi-Lift Jack. A vacuum pump is an essential tool used to repair cooling units to clean the compressor by removing unwanted air and water vapour.

A drill is used to puncture the wall for the AC’s pipes and wall brackets. A handheld drill would be a step up from the chisel and hammer Emmanuel currently uses. The videos I watched showed how technicians use it to create very clean-cut holes — a far cry from the ragged holes crude tools form.

This is important because, apart from aesthetics, you don’t want air leaking out from spaces in the room.

When it comes to quotes, he gives prices based on the type of building where the cooling unit is to be installed. This is because it takes a lot of effort to move the AC up the house using a ladder, a situation that can be avoided by using a lift that guarantees a safe and hassle-free operation.

All of these cost quite a bit of money. But these are not the only tools Emmanuel employs.

The AC technician reveals that he uses websites like Jiji and Facebook for advertising his products and services.

According to him, he has received referrals from those ads.

I find this quite interesting because while searching Google for a cooling technician in the Ile-Ife area, his was the only name that immediately came up. Others were located in Osogbo (1 hour 22 minutes away), Ibadan (1 hour 29 minutes away), and Lagos (3 hours 53 minutes away).

I would later to find others, but that involved a search on Instagram, Google, Olist and Facebook.

Inevitably, our discussion veered into types of ACs, the most popular, and the best ones to use.

In Nigeria, the climate is tropical, semi-arid in the far north, and progressively rainier as you move southward. In the north, the temperatures become extreme depending on the season. When it’s hot, it’s scorching. When it’s cold, it’s freezing.

The south has more temperate weather, but the country is quite hot. A fact most Nigerians can attest to.

Presently, the market for single-split air-conditioners in Nigeria is set at approximately 560,000 units annually. LG leads the pack with an 11% market share, Samsung has 9%, Panasonic and Midea have 8%, Gree and Chigo have 7%, Daikin 5%, while Haier Thermocool and Hisense have 3%. The remaining market share belongs to lesser-known brands like Royal.

86% of these cooling units are assembled in the country, with 14% of them imported. This is because, unlike the automotive sector, for example, Nigeria encourages local assembly of the cooling units by setting a lower import duty (5%) for completely knocked down units, compared to assembled units (20%)

Emmanuel says most customers prefer to buy new units with brands like Hisense, Royal, and Midea as the most patronised due to their relative cheapness. Prices range from the ₦100,000s ($243.01) to the ₦500,000s ($1215.07). However, he resisted my pressure and declined to name the best brand.

I certainly wished we had decided to buy new ACs right then.

Cool careers for a better world

When asked if he would be willing to switch jobs, Emmanuel said no. According to him, he earns more money working as an artisan than most salary earners. So in one sitting, he could make more than most people.

Money aside, he views his work with enthusiasm. His eagerness to answer questions and willingness to learn things that he previously did not know, and his dedication to attempting his best work, all shine through as we converse.

Happy World Refrigeration Day as we all take a moment to appreciate the cooling technicians who keep our homes and work areas cool and serene enough for comfortable living.

We should also appreciate the man who invented the modern air-conditioner, Willis Carrier.

Great work. I can relate to the AC palava.

A drill is used to puncture the wall for the AC’s pipes and wall brackets. A handheld drill would be a step up from the chisel and hammer Emmanuel currently uses. <a href=”http://www.dalesac.com/air-conditioning-repair-north-port-f1/
“>Dale’s AC Services</a>