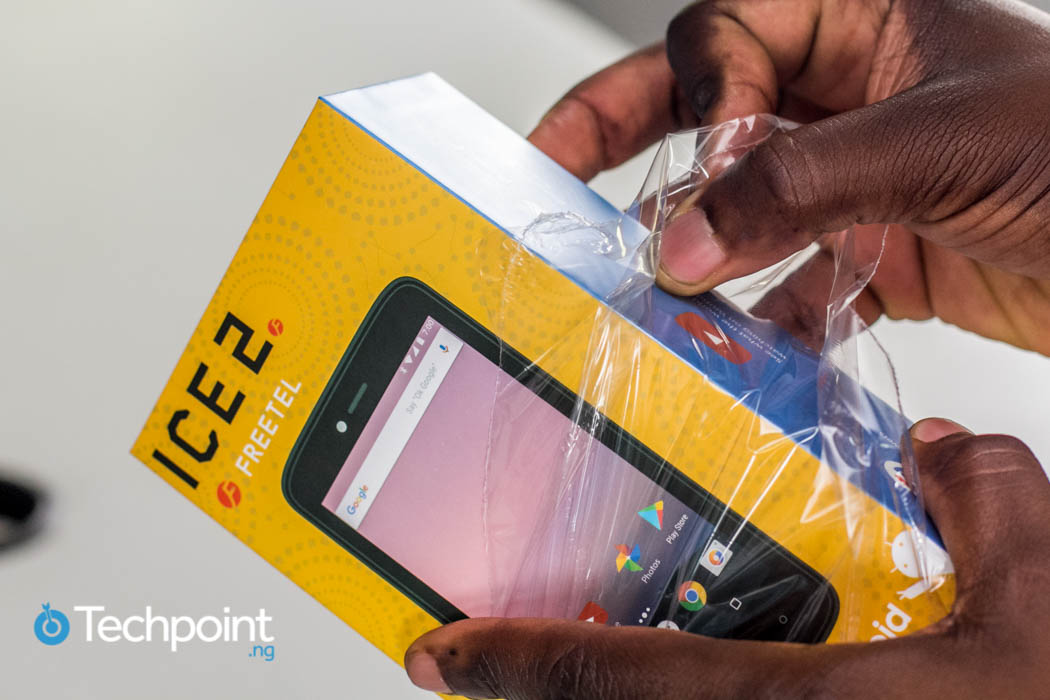 During the Google for Nigeria event held in 2017, Google announced various new product features and initiatives for the African market including Street View, YouTube GO, digital skills for Africa, funding for African startups and of course a ₦13,000 ($35) smartphone.

Suggested Read: Everything Google CEO, Sundar Pichai and other execs announced in Nigeria

Google CEO, Sundar Pichai during the 2017 Google for Nigeria event in Lagos

The smartphone, Freetel ICE 2, was unveiled two months after, in partnership with MTN Nigeria and TD Mobile, the mobile arm of TD Africa, a pan-African distributions company.

Freetel, a Japanese Original Equipment Manufacturer (OEM) produced the device, Google provided the operating system, Android One on which the smartphone runs, MTN provided the buzz, including a free SIM card and double data bonus on every data bundle purchased for three months, while TD Mobile worked on distributing the device across Nigeria.

Suggested Read: This is the Freetel ICE 2, the ₦13,000 smartphone Google promised us

The device which was dubbed the “cheapest smartphone in Nigeria” at the time, was launched to contribute to smartphone penetration in Nigeria, providing low/zero income earners access to basic online services.

The ICE 2 went on sale at all major online and offline retail stores including MTN’s retail outlets nationwide from September 2017. One year down the line, here’s what we know about the Freetel ICE 2 so far.

It was not as popular as we thought

At least not offline. Despite the massive campaign MTN conducted at the time the phone was launched and reports of its immediate sales success, it isn’t as popular as one would assume. To confirm this, I recently embarked on a journey to conduct a quick survey at the Ikeja Computer Village.

Suggested Read: Ikeja Computer Village: What it was, what it will always be

Out of the 30 phone stores (both big and small) I visited to enquire about the phone, 22 of them had never heard of the Freetel brand, let alone the ICE 2. Only five had heard about it or seen someone using it, but they never sold it because they believe that there’s not enough demand for the phone.

Of course, we cannot judge the entirety of its popularity based on just 30 stores in Lagos, but it gives us an inkling of how much impact the phone had.

Freetel has reportedly pulled out of the Nigerian market

Only three of the 30 stores I visited had at one time sold the ICE 2 and all three of them had sold their last stock of the phone as far back as four months ago.

The Freetel ICE 2 is not readily available online either. I reached out to online merchants on popular Nigerian eCommerce sites Konga and Jumia who supposedly sold the phone. However, none of the four dealers I was able to track down had the phone in stock.

According to a source close to TD Mobile, this is because the OEM has pulled out of the Nigerian market. She confirmed that the phone sold out very quickly initially when it was launched. Unfortunately, the Freetel brand could not compete with the TECNOs and itels in the market that have larger market shares and various models across ranges.

Nigerians are still searching for the Freetel ICE 2 online

For many Nigerians who have access to the Internet, the process of buying a new phone begins with searching the Internet for specifications and price ranges. Since it is still expected to be one of the most affordable smartphones in the Nigerian market, the Freetel ICE 2 is still being searched for online.

In the past 30 days alone, we’ve seen over 100 searches of the Freetel ICE 2 land on the Techpoint website. This is an indication that there’s still a non negligible demand for the phone.

Its parts are not available in the market

For some people that had earlier purchased the Freetel ICE 2, one of the challenges they face is the inability to find the parts of the smartphone in the market.

You will find this complaint in the comments section of every other article on the device. This means that once the phone develops a fault that requires a change of any of its parts, it becomes irreparable.

The market has moved on

The Nigerian phone market is a very competitive one with different brands fighting to acquire the largest piece of the pie. Between September 2017 and now, smartphones within the same price and specifications range as the ICE 2 have entered the Nigerian market.

Therefore, anyone who goes to the market looking for a low-entry smartphone like the Freetel ICE 2 will have a wide range of brands to choose from.