Technology, funding, learning models: What is the next frontier for edtech startups in Africa? 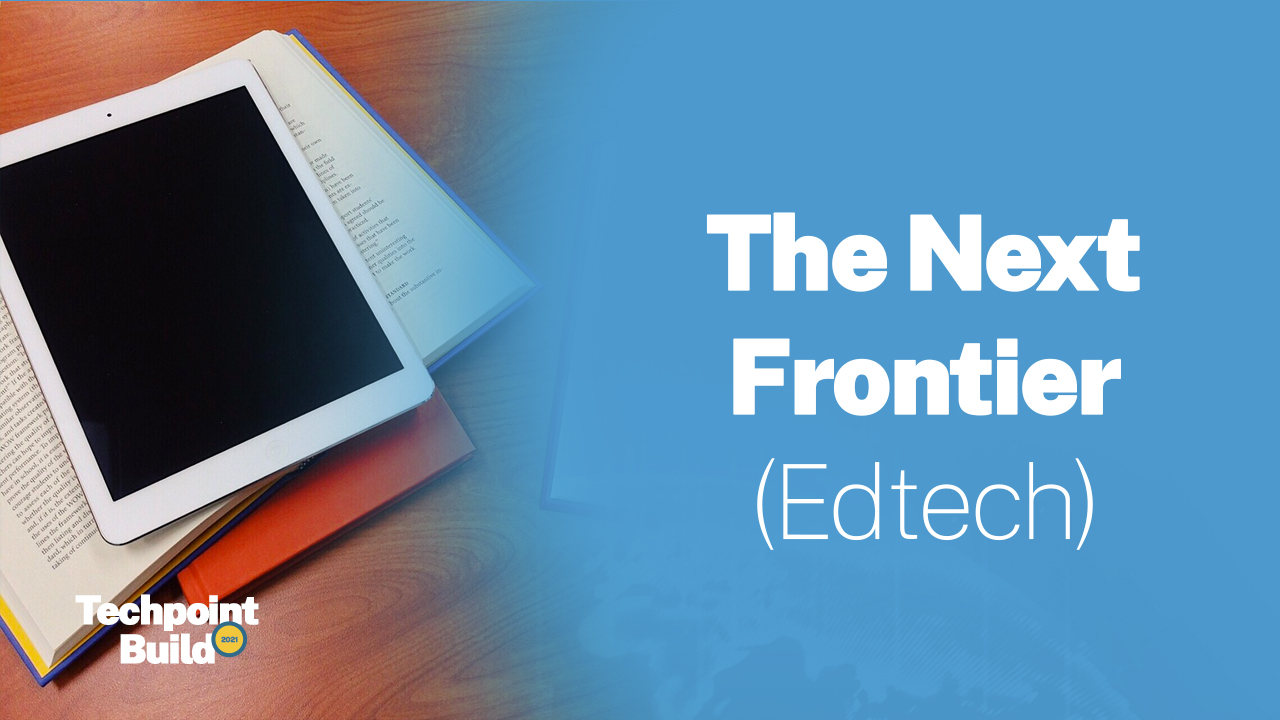 “Something good is a frontier; something better is also a frontier and something excellent is just another frontier! You can always go beyond these frontiers! And so what is excellent? Just a frontier!”

“There exist limitless opportunities in every industry. Where there is an open mind, there will always be a frontier.”

When I think about the word ‘frontier’, what comes to mind is the American Wild West. Why? My first idea of what that word means came from a book romanticising the life of one of America’s founding fathers, Benjamin Franklin. For the life of me, I can’t remember the title, and Google Search is not helping.

But back to the word frontier. While there are several meanings of the word, for our purposes, we would be adopting this definition by the Merriam Webster Dictionary: “a new field for exploitative or developmental activity.”

Why all the talk about frontiers? We’ll get into that at the end of this article, but for now, let’s take a look at some numbers.

The edtech industry in Africa: the now

According to Briter Bridges, as of Q1 2020, there were 210 edtech startups in Africa. The African e-learning space is many times described as nascent. A bit surprising, as it is not a novel industry on the continent.

The African Virtual University, created by the World Bank in 1997 and established by a charter signed by eighteen African member states, is Africa’s first Internet-based school. It also has a physical building in Kenya’s capital, Nairobi.

Nigeria also has a distance learning university, the National Open University of Nigeria, founded in 2002 and the first of its kind in West Africa.

However, only just recently has the edtech space begun to pick up  steam.

According to Boye Oshinaga, Gradely CEO, “The edtech industry is at its infrastructure-building phase in Nigeria and Africa, where those players that invest in the rails will get a big payoff in the coming years.”

Why the infrastructure-building phase? Because a lot of what would power the industry is just as nascent as the edtech space.

Most of the time, accessibility to these edtech startups requires an Internet connection, or at the very least, a smartphone.

The Global System for Mobile Communications (GSMA), however, predicts that 65% of sub-Saharan Africa will have a smartphone by 2025, a number which stood at 50% as of 2020.

Eyitayo Ogunmola, Utiva CEO, classifies them into edtech and teched. He says the former has more to do with “deploying tech solutions to creating learning experiences.” The latter, on the other hand, “is majorly around incubating and accelerating talent.”

But he also introduces some unlikely sectors, like jobtech, HR tech, and workforce development tech.

“People also think Jobberman and all the hiring platforms are also education technology because many of them are now deploying learning as a subset of the value.

“So the education technology industry, in Africa, by extension, is a combination of the three different categories that I’ve mentioned: the edtech as a product, the teched as a service, and also the other value creation products and services that are also supercharging the learning side of things.”

The edtech industry in Africa: the future

So, what happens next?

Ogunmola is very confident that these sectors will never merge because “they offer different kinds of value.” So while he doesn’t see them merging, he believes the industry is headed the way of a harmonious divergence.

“I see many companies are adopting new technologies, but I also see many companies adopting new approaches; it’s going to be a combination. For example, in the future, it’s going to be a combination of self-paced learning, instructor learning models, gamification to incentivise learning and completion rates, and micro franchising.

“There are other things like VR and augmented reality. Facebook is exploring the metaverse, right? It will be about those things.”

“All disruptive technologies and the behaviour to make them widely acceptable over the next ten years already exist in some form. They will just be utilised further to deliver clearer advantages over current systems and eventually win.”

He, however, says, “The future of the industry is AI-driven and personalised, and will have education delivered in more animated, interactive, and immersive content formats. Methodologies such as Use of Technology in the Classroom and other widespread methodologies will be empirically tested to prove their relevance.”

He also believes homeschooling would increase, citing examples of the US and the UK.

“In the future, parents will take charge of their children’s learning and be more proactive in what skills they try to imbibe in the child or what exposure they are looking to add to enrich their children’s future.”

The increase in homeschooling occurred during the pandemic, but Africa’s story is split in the middle. Some countries — Nigeria, Ghana, and Zimbabwe — do not have any laws recognising homeschooling. However, in some, like Kenya, it appears to be illegal. In contrast, others like Zambia, Rwanda, South Africa and Botswana have legalised homeschooling.

In fact, in Botswana, you are not mandated to send your child to school.

While homeschooling data is not available in most African countries — a challenge we’ll come to in a bit — South Africa, where homeschooling has been legal for several years, showed a spike in the heat of the pandemic.

One thing Ogunmola and Oshinaga agree on is the emergence and importance of more data in the next frontier of the edtech industry.

“As you deploy technology into the learning space, leaders would have to focus aggressively on the data that has been generated and use that data to improve the technology because this is the intersection of human behaviour and technology,” Ogunmola says.

He further submits that how this data is utilised to help improve learning for the user is far more important than collecting data.

“It’s not just about, ‘I have 50 projects on this platform; go and work on them.’ It’s about whether the platform can provide you with feedback during learning to improve your capacity. Because ultimately, this is education — improving your capacity.”

But, Africa’s data collection and retention structures are pretty underdeveloped. Look no further than identity verification and collection processes in several African countries and how long it has taken to get to this stage.

Oshinaga laments the lack of data, especially in the use of government funds without any thought to ‘Who needs it more?’ or ‘Is this school performing well enough to warrant this funding, or should it be shut down and focus shifted to other schools?’”

So he says, “We will have more data on the performance of teachers and schools at a more global level so it’s clear what donors, governments, investors, and companies can do about it.”

As we said in an earlier article, for greater efficacy, the government would do better to support players looking to aid universities in providing learning for students.

Putting it succinctly, Ogunmola says, “Universities would never be edtechs.”

Tying it back to data collation, he says, “Imagine all universities have the data of all their students. Name, email, and mobile number, not some email they submitted ten years ago that is no longer updated. If they have this updated, they can share that data with us in the form of an API, and we can continue to improve the alumni. That’s how we build a much-improved ecosystem of talent; it’s not by this disintegrated and disaggregated form of engagement.”

In 2020, as the coronavirus swept cities and students remained at home for an extended period, many K-12 schools and universities moved online. This marked a turning point for edtech use as startups like uLesson saw a rise in users and consequently accelerated expansion plans.

But for most users, especially those in the low and middle-income bracket, some of these services were out of reach due to Internet and smartphone availability. To help with this, some countries turned to tried-and-true radio programmes as an avenue to improve accessibility and affordability.

According to Yomi Ojo, Founder of SchoolsCompass, the divide between the haves and have nots is a huge challenge for the edtech industry.

“A lot of these technologies are being built for the privileged, but it further widens the educational gap between them and the less-privileged. School owners and edtech products are overlooking these things; it’s a time bomb.”

But as Ojo himself says, edtech startups are not non-profit organisations. He believes that the government should do more to provide better Internet services and partner with these companies.

A position Ogunmola and Oshinaga agree with to varying degrees. While both believe public-private partnerships would help in the future, Ogunmola thinks we will see more Buy Now, Pay Later (BNPL) models or loans.

According to Ogunmola, Utiva is one of many companies already implementing these ideas. TalentQL is another one doing so via its AltSchool Africa product.

“Why shouldn’t I take a loan for learning if I can guarantee that it’s going to get me a job?” Ogunmola asks.

As of August 2021, Africa’s edtech industry has attracted $20 million in funding since 2019. This is not a lot of money, especially compared to investments in edtech on a global scale, which reached $18.6 billion in 2019 alone.

But Oshinaga believes we would see better investment rounds in the future. “We already have a Series A of over $5m and seed of $2-4m. This trend will continue.”

In January 2021, Nigerian edtech startup, uLesson, also raised $7 million in a Series A investment round led by Owl Ventures.

Based on United Nations’ estimates, according to Worldometer, Africa currently has a population of 1.3 billion people, with a median age of 19.7 years. This number is expected to grow to 1.6 billion by 2030.

At Techpoint Build 2021, discussions about the next frontier in different sectors would be in the limelight. In anticipation of these discourses, we are talking to industry leaders, getting opinions, and seeking patterns.

We can’t wait to have you join us in January 2022. If you’ve not registered yet, here’s the link.