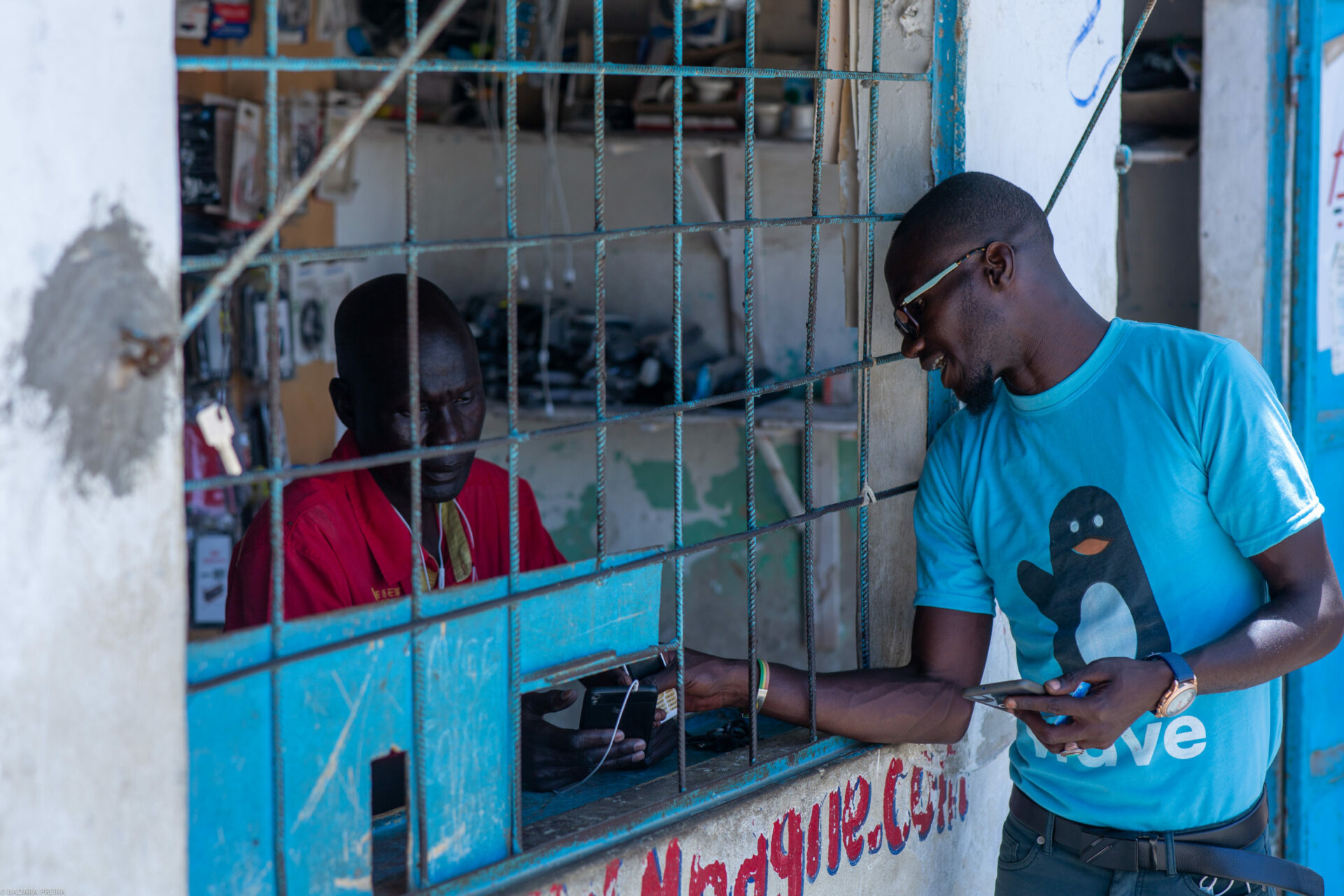 As a result, the platform was built around an e-wallet that allows for cash deposits and withdrawals, bank account transfers, loan and savings transactions, receiving a salary, and bill payments ranging from electricity to school fees.

According to studies, in 2017, increased access to mobile money reduced poverty in Kenya, particularly among female-headed households.

The impact of mobile money on poverty reduction appears to be the result of improved financial behaviour – by facilitating easier and safer savings – and changes in the occupational choice of users.

More than a third of Senegal’s population is impoverished, with chronic poverty affecting 75% of families. Therefore, to tackle this problem, mobile money service provider, Wave, was launched in 2018 to help Senegalese and other Africans who lack affordable ways to save, transfer, or borrow money, start businesses or support their families.

The Senegal-based fintech startup raised $200 million in Series A funding on Tuesday, September 7, 2021, at a $1.7 billion valuation.

The round was led by Sequoia Heritage — an endowment-style fund operating independently under the Sequoia brand — Founders Fund, Ribbit Capital, and payments giant, Stripe. Partech Africa and Sam Altman, ex-CEO of Y Combinator and current CEO of OpenAI, also participated in the round.

1. Wave is a spin-off of Sendwave

Durbin Drew (CEO) and Lincoln Quirk, Head of Product, co-founded Sendwave, an app-based company focused on cross-border payments, in 2014 after Drew became frustrated with the difficulties of sending money to his Tanzanian NGO.

“This prompted us to create a no-fee instant remittances app that allows users to send money from North America and Europe to East and West Africa,” Drew says.

After launching that, they realised that mobile money provided by telcos was expensive and provided a poor user experience.

Quirk adds, “Besides, the technology (USSD) was out of date, and the customer experience and agent liquidity were both lacking. So, in 2018, we launched Wave Mobile Money, our second company, in Senegal.”

Interestingly, in 2021, WorldRemit, a digital, global cross-border payments company, completed a $500 million cash and stock acquisition of SendWave that began in 2020.

The co-founders’ understanding that 298 million adults of Africa’s population of over 1 billion people had bank accounts as of 2018 propelled them to launch Wave for both the unbanked and banked population.

Unlike PayPal, Wave is a peer-to-peer money transfer service that uses mobile money accounts rather than bank accounts.

“Customers can make deposits and withdrawals at physical agent locations without paying a fee, or they can use a smartphone app that takes a flat 1% cut of the money sent,” Drew explains.

Furthermore, customers can pay bills with no charges and buy airtime instantly.

Unlike its competitors, customers aren’t charged for bill payments. It provides users who do not have access to a smartphone with a free QR-card that can be used to transact with agents who can open accounts, accept deposits, and make withdrawals.

3. Wave was founded by Americans

Drew and Quirk founded the company after meeting at Brown University in the US.

They became friends because they shared a passion for creating simple products with a social impact. And with Wave, they believe that they can make Africa the first cashless continent.

“We are deeply committed to developing products that users love. Our technological background, combined with our living experience in some African countries like Tanzania and Senegal, was the ideal combination for developing a technology-first solution to address the challenges of domestic money transfer in Senegal,” Quirk says.

4. The largest Series A round for an African fintech; third largest overall

No other African fintech startup has raised $200 million in a Series A round.

Interswitch, a digital payments company, received $200 million from Visa in 2019. The $1 billion company plans to use the funds to build an instant acceptance network across Africa that will benefit both consumers and merchants.

In May 2021, Flutterwave, valued at $1 billion, raised $170 million in Series C funding to accelerate customer acquisition in its markets.

OPay, a Chinese-backed fintech startup, raised $400 million in Series C funding in August 2021, intending to become the power that accelerates the economic development of emerging markets. The company was valued at $2 billion.

So, Wave is Africa’s newest Unicorn, the first from Francophone Africa, and the third startup to reach the billion-dollar mark in 2021, that is, after Flutterwave and OPay.

According to the GSMA report, with 5.2 billion mobile users globally, the mobile industry possesses the reach and innovation required to expand financial inclusion.

In Africa, mobile money is increasingly being used to conduct transactions for essential services, and as such, becoming part of everyday life. Women make up the vast majority of remittance recipients worldwide, and remittances impact both women’s actual income and social norms.

Mobile money is significantly less expensive than traditional remittance services. According to the World Bank’s Remittance Prices Worldwide, the average cost of sending $200 remains high at 6.8% in 2019.

Also, it reportedly provides increased convenience, privacy, and security, all of which women value highly. Wave claims that many women now use their services for their businesses.

According to a 2016 report titled, “The long-run poverty and gender impacts of mobile money”, the rapid expansion of mobile money in Kenya has enabled 185,000 women to move out of subsistence farming and into business or sales occupations.

“It’s been fascinating to see who uses our product. Many women-led small and medium businesses in Cote d’Ivoire have adopted Wave to facilitate trade, such as selling fruits and vegetables or acting as Wave agents.

“It’s the preferred mobile money service for women’s savings groups, known as “tontines.” Their free deposit and free withdrawal pricing enable hundreds of these large tontines to save and easily access their money when needed,” Drew says.

Wave expanded to Ivory Coast in 2021 after launching operations in Senegal, its largest market, in 2018.

Per TechCrunch, Wave claims that its platform is Senegal’s largest mobile money player and is used by more than half of the country’s adults.

Therefore, the startup hopes to replicate its success in Ivory Coast, which became its second official market this year, with a user base of between four and five million people.

Wave intends to use the funding to expand its presence in Senegal and the Ivory Coast, as well as add to its already 800-strong product, engineering, and business teams.

Wave will also expand into other markets, like Uganda and Mali, where the regulatory environment appears to be friendly.

7. Wave is taking on existing markets

In 2015, the Central Bank of West African States, the common central bank of eight French-speaking countries in the region, allowed nonbanks to operate mobile money.

Mobile money has grown in popularity since then, owing to early telecom entrants who had the necessary infrastructure and user base (mobile networks and subscribers) to launch the service.

Wave, as an independent company, aims to compete against telecom companies like Orange, which is also a mainstay of mobile money in Francophone West Africa.

According to TechCrunch, Wave is 70% cheaper than telecom-led mobile money. If there is a transfer problem, refunds are issued immediately, as opposed to existing mobile money platforms, which may have to wait several days.

Wave appears to be on track to compete in other telco-dominated mobile money markets. Because it plans to launch in Uganda, MTN and Safaricom’s M-Pesa — the continent’s flagship mobile money powerhouses — face new competition.

Moreover, Wave’s technology is also distinct from that of telecom-driven mobile money. Wave is solely app-based, whereas the existing companies primarily focus on USSD (although there are provisions to use applications).

The list of investors suggests that they believe in the potential of mobile money in Francophone West Africa and Wave.

Per the Global System for Mobile Communications (GSMA) report, Senegal has one of Africa’s fastest-growing mobile money markets, and the African market processed $495 billion in transactions in 2020. And Wave plans to enter this market.

Drew believes that with more than 17 million people, Senegal is a large enough market for Wave to succeed if they work hard. However, because it is a small market, they may be able to gain market share more quickly, which seems like an excellent place to start.

“It’s a fantastic time to be launching a venture-backed startup in sub-Saharan Africa. Senegal has a thriving tech scene and startup community, and we are honoured to be the country’s first Unicorn. We hope that our fundraise demonstrates the opportunities in Francophone West Africa’s tech ecosystem,” Quirk concludes.