In conversation with Funke Opeke, CEO of MainOne, on strategic partnerships and Internet connectivity in Africa 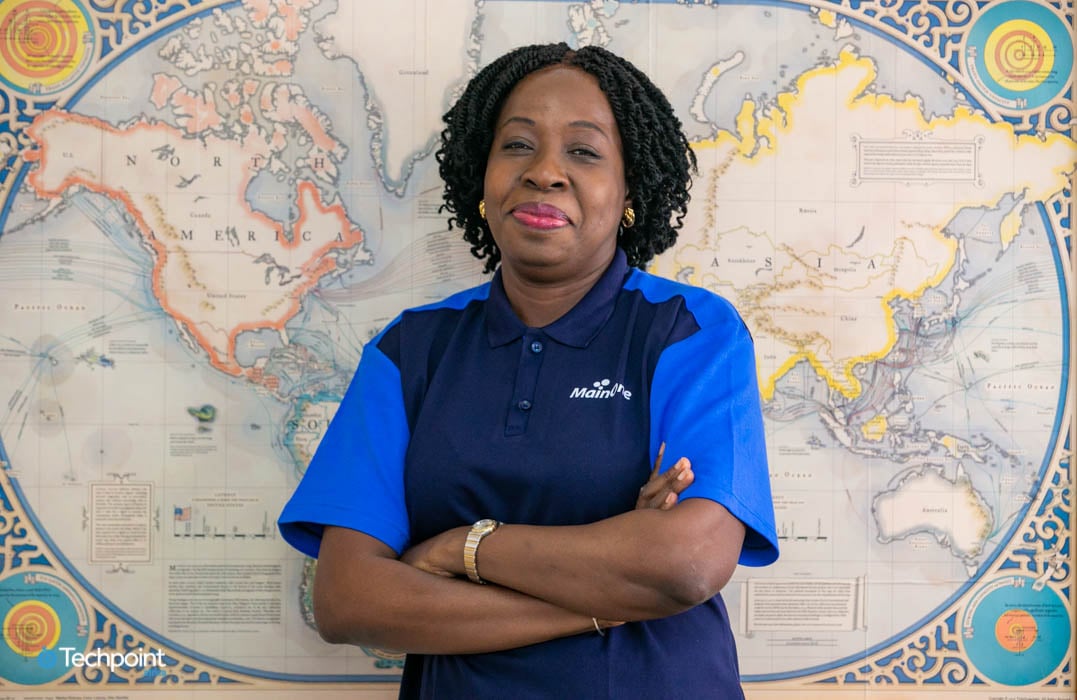 On Wednesday, July 1, 2020, MainOne celebrated its 10th anniversary. The occasion was a notable one for MainOne, and for several tech companies that have benefited from the Internet capacity it has helped build.

We headed for the MainOne office in Victoria Island, Lagos, Nigeria, to have a chat with its CEO, Funke Opeke. Though the office typified the new normal during the pandemic — serene and quiet — I caught a glimpse of the company’s culture amongst the few staff present.

The gentle but structured way they received visitors, the firm but polite manner with which they aired their opinions were remarkable. It was only a glimpse, but it was remarkable nonetheless.

As we began the interview, Opeke sat in a chair directly in front of a beautiful map showing cable connections around the world.

The journey so far

It was exactly ten years since the Funke Opeke-led team laid the first private submarine cable in West Africa, the first of its kind at the time.

The launch heralded a massive boost to Internet speeds in the country. With a large presence in Lagos, one could draw links between the rise in Internet speeds and the proliferation of startups in the city.

“First, I’m grateful for having had the journey. I thank God and everyone who has made it possible. There have been high moments and low moments along the way but we’re still here, and the journey is still meaningful and adding value,” Funke recounted.

On those high moments, Funke points to the first day the submarine cable began operations over ten years ago.

“We were on time and budget. It was a big bet at that time considering we were a small startup, but we succeeded,” she said.

This particular feat seems to have been a launching pad for the company and every other milestone it has achieved.

Notable among them were the winds along the way, the impact MainOne’s services have had on startups

“You look back and see what has been happening with startups in Yaba, and the entire tech space in Lagos. Each time any of the founders reaches out and I see the awe, the appreciation, and recognition for what we’ve done, it really touches me,” Opeke stated with some emotion.

For Opeke, the levels of Internet penetration in Nigeria, being invited to chair the Nigerian National Broadband Plan 2020 – 2025, and the White House invitation to discuss Internet connectivity for the globe and to unserved populations in Africa, shows some level of recognition for the company’s work.

MainOne has also entered some important partnerships such as with the Orange Group in its entry into Ivory Coast and Senegal, and Vertiv for expansion of its data centre facilities.

But the journey has not been rosy

According to Opeke, one of the biggest challenges has been raising capital and closing in on them. This is to be expected considering how capital intensive telecom infrastructure projects are.

“Also, the environment in which we operate has been tough.”

According to Funke, MainOne has invested a lot in power. With privatisation, they were able to make a private connection to the national grid. This meant they’ve had better power than most.

Despite this, the company’s distributed operations still face the same power challenges as others. Apparently, they still have to invest in backup power, collocation facilities, and other power solutions.

“Truly, I wonder. For all we collectively invest in power in this country, we really could have better grid power solutions for everybody,” she commented, her eyes lighting up in thought.

“The question is how do we align or aggregate all we spend individually on generators and batteries to provide a better collective solution?”

Besides the working environment’s challenges, Opeke still looks back on the company’s impact with some longing.

“I look back, and I never imagined that ten years after we launched, every school in Nigeria will not have access to the Internet, but that is the sad case today,” she lamented.

She referenced the COVID-19 pandemic and the effect it has had on school children, most of whom have been told to go virtual.

“It is safe to say that only the privileged have access to the Internet today. This leaves a large portion of our student population without access to learning,” she explained.

Opeke’s statement is close to the truth. As we have stated in previous reports, Nigeria’s Internet market is not as big as official data suggests and the cost of accessing the Internet is still rising.

“What does that say about us as a society, about how much value we place on the education of our young people?” Opeke asked.

She explained that there is a need to be globally competitive and education is the foundational element to achieving that.

“Such things are still low moments for me. To see how far we’ve come and how much there is still to do.”

As of 2008, Internet penetration in Nigeria was relatively low. Internet cafes were popular and very few smartphones were available.

Opeke says her vision is to bridge the digital divide in West Africa with the provision of enabling infrastructure.

“I came back from the US and the Internet had been exploding over there, but in Nigeria there was no Internet and no infrastructure. So we decided to put the pieces together and make this happen.

“If we’re going to transform our society, our society needs to be developed. It’s a youth population, it’s education, access to information, it’s the ability to innovate. It’s giving young people access that is going to bring about the full benefits of this.”

Opeke believes that with focused efforts, the Internet can get to school children in Nigeria. Though it might not be the same quality of instruction as they will get in schools, they can get access to world class educational materials on the Internet.

“Your own company (Techpoint Africa) was founded by a self-taught entrepreneur who had access to the Internet,” Funke remarked. “Whenever I hear such stories, it really warms my heart,” she added with a smile.

Opeke claimed that MainOne has been more successful when it comes to impact than it has been commercially. The company was capitalised with $240 million for starters.

“It takes significant amounts to run this infrastructure and keep it performing at a world-class standard and continue to invest in local distribution, infrastructure, and data centres,” she explained.

“We can’t be complacent because we still have obligations to our shareholders and to our lenders. We need to continue to top up on our debts to invest in expanding our infrastructure.”

Opeke pointed out that having a good governance structure in a company prevents its members from being complacent. When that is in place, the company becomes more than any individual.

“When you look at the original vision and the potential and where we are, you will know that there is so much to do. If I get complacent I may have to step aside so that the vision can move forward,” she adds.

In November 2019, MainOne expanded its submarine cable to Cote d’Ivoire and Senegal in partnership with french telecom company Orange Group. A move Opeke says was in line with the company’s vision for the west coast of Africa.

She states that when the cable was first laid in 2010,  the concept of private submarine cables was very new to a lot of regulators. Though they were in a hurry to bring Internet access, they could not secure the permits to connect the countries along the way, between Nigeria and Europe.

“To solve this, we put up branching units which are just connectors so the cable can extend to those markets.

“As we continued exploring opportunities, a fabulous one came up with Orange. They were already present in two markets, and it made sense, commercially, to partner with them considering their status as a major provider and the compelling technical solution we provided for them.”

Apparently, it was a win-win for both sides. One provided access to its underutilised cables and the other gave access to new markets.

MainOne is looking at more expansions in Africa and has recently signed an agreement to extend services to Burkina Faso.

Also, MainOne has struck a partnership with Vertiv for the expansion of its data centre services.

“We’ll continue to expand our data centre footprint. Within Nigeria, we’ll expand to places like Lekki, Sagamu, and several others. Across the region, we are also looking to enter other West African states,” Opeke concluded.

The same applies to connectivity which, as she pointed out earlier, remains congested within the country.

She, however, explained that the company currently has no immediate plans to go public.