The Great Stack: Paystack is building an army of exceptional execs 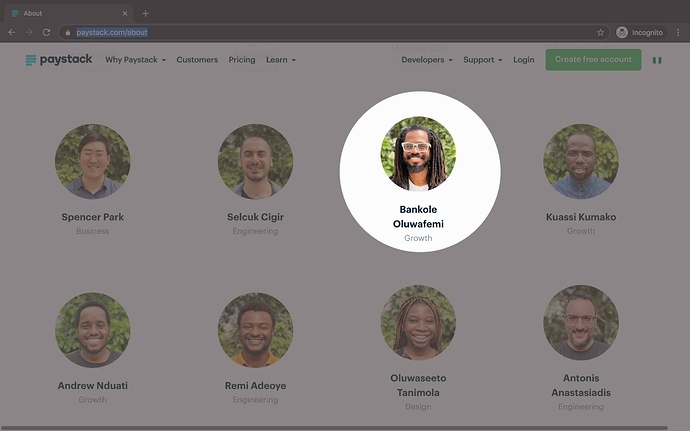 Paystack, the second Nigerian startup to be backed by Y Combinator, debuted in the country’s fintech space in 2015 and has since experienced tremendous growth. Currently operating in Nigeria and Ghana, the Delaware company raised $11.7 million from five rounds between 2016 and 2018.

Gradually, Paystack grew to become one of the most prominent payment platforms in Nigeria. With co-founders Shola Akinlade and Ezra Olubi at the top of the organogram as CEO and CTO respectively, the startup currently has 112 people on its team.

This team is a mix of expats and Nigerians taking up roles across different units including operations, growth, design, engineering, product, and business. Notably, like most startups aiming for gender representation, women make up 31.9% of the team.

The startup raised a 1.3 million seed fund in December 2016 which was to be invested in building its engineering team, growing sales and marketing operations, accelerating product development, and customer onboarding. The current team reflects this. In fact, Emmanuel Quartey, the head of growth, was hired in 2017.
Advertisement
Even in 2020, the composition of the Paystack team reflects a focus on growing sales and a solid engineering base. Perhaps this is why the startup can claim to serve over 60,000 companies in Nigeria and why it recently launched a Commerce platform integrated with a popular eCommerce site builder, Wix.

After its Series A investment in 2018, there was a huge increase in new appointments in 2019 — as deduced from the information on the current team. It was about a 140% increase in the number of employees, most of which are software engineers and growth specialists.

It is suspected that the many successes Paystack has recorded within five years did not happen by chance. A recent survey by Techpoint Africa reveals that the team is strategically made up of experienced individuals who had previously held roles in notable local and foreign firms as well as startup ex-CEOs.

This list of 12 exceptional individuals justifies our suspicions and gives a glimpse of the talents Paystack can leverage for future growth.

Bankole Oluwafemi is the founder of Big Cabal Media, the parent company of news publication and content platforms, TechCabal and Zikoko. He surprisingly exited the company in January 2020 as the editor-at-large, but still holds a stake there.

Before founding TechCabal in 2013, Oluwafemi was co-CEO of Idea Media and a social media consultant at The Bridge IVF Clinic.

Apparently, Oluwafemi joined the Paystack team after this move, probably in February. The survey revealed that some key additions to the team took place very early in the year.

It appears his move to Paystack was done unceremoniously. As at the time of compiling this report, his LinkedIn profile wasn’t reflecting this new role. However, given his background, it is not hard to have a guess, and our investigation confirms that he’s on Paystack’s media team.

Kuassi Kumako is the co-founder of CoinAfrique Annonces (translated as CoinAfrique Ads), a classified platform where buyers meet sellers, operating in 12 francophone African countries. And he’s been active there for six years. Simultaneously, Kumako managed DevEngineLabs, a startup management company, until 2018.
There’s, however, no indication that he left CoinAfrique before joining Paystack.

Kumako brings his four years of experience in consultancy to Paystack. Prior to joining Paystack in January 2020, he was the consultant in finance, competitiveness, and innovation at the International Finance Corporation (IFC), a sister organisation of the World Bank and member of the World Bank Group.

Amandine Lobelle has been the head of business operations at Paystack since June 2019. She replaced Oluwaseun Runsewe who joined OPay as the director of product in 2019. Although originally from Belgium, she lived and schooled in Nairobi, Cape Town, and New Delhi, but considers South Africa as home.

She joined IFC in 2015, and before she left in 2018, she served in a number of capacities including analyst and investment officer. Initially, she was an investment officer at Morgan Stanley, a global investment, banking, and research enterprise.

A University of Lagos alumnus and an ACA certified accountant, Wuraola Jegede started her career as an assistant account receivables officer. After practising for about a year and six months, she moved to Union Bank of Nigeria, one of Nigeria’s oldest banks, as a financial analyst in 2013.

She occupied this role for seven years until she was onboarded on the Paystack team guessed to be recently in 2020. However, there isn’t a clear definition of her role yet.

Priscilla Ekhator is a professional estate manager, and has been a facility manager for more than five years.

Between April 2016 and January 2019, she was the facilities coordinator at Andela and she took up the same role at Paystack a month after leaving. Ekhator manages and supervises Paystack’s exquisite office building in Lagos and other operational facilities in different locations.

Taking care of Paystack’s legal concerns is Naomi Amobi. Amobi is a graduate of the London School of Economics and Political Science (LSE). She spent a short period of her professional life at the federal high court of Nigeria before moving to Aluko & Oyebode, a Lagos-based law firm, first as an associate, before rising to become a senior associate.

With more than seven years as a practising barrister, she became Paystack’s legal and regulatory counsel in February 2019.

Ita Okponung secures Paystack from fraud and risks associated with a payment gateway platform serving thousands of companies. He was hired in September 2018.

Interestingly, since 2010 Okponung has managed risk for a corporate firm and a startup, spending substantial years in both. First at Zenith Bank Plc for more than six years as a risk monitoring, compliance and reconciliation officer.

Just after his exit from this bank, he joined Wakanow, an online travel agency, in 2016 to keep chargebacks low and manage payment risks. From our survey, he was probably still on this job when he joined the Paystack team.

Mohini Ufeli is a trained journalist who has performed different roles in the media field including photography and research.

Between 2014 and 2018, she moved from being a documentarian to a media associate, and then from communication associate to communication coordinator in Andela, using at least nine months on each role.

Still in line with her specialty, she joined Paystack in September 2018 to oversee the startup’s media production and documentation.

According to a LinkedIn search, Fisayo Kolawole served for more than seven years at Interswitch Group. He joined as a senior business analyst and later became head IT telco media and insurance.

Kolawole started as the head, merchant acquiring and business expansion at Paystack in 2017. By October 2019, he took up the role as the head of commercial.

Khadijah has been Paystack’s product partnership lead since November 2017. She started her career as a product support specialist at Interswitch in 2008. With steady progress, she rose to the position of the head, Collections and Disbursement Product Management all within nine years before exiting the Interswitch.

After obtaining a Bachelor of Arts in Architecture in Yale University in 2012, Emmanuel Quartey tried out jobs in sales and personal assistance before taking a career turn into communication and sales.

In 2014, he became the marketing and communications fellow at Meltwater Entrepreneurial School of Technology (MEST), an African startup incubator founded in Ghana. During that time, while he published articles on MEST’s blog, he also produced content on online publications like Quartz and African Business Central.

Taking up a higher role, he became the general manager of MEST Incubator, Accra, after holding the product lead position for one year and eleven months. Leaving MEST, he became Paystack’s head of growth in 2017.

Gbadebo Oyelakin joined Paystack in May 2018 as the senior software engineer. And his reputation in this field precedes him. Prior to this, he was a web developer at Jobberman, the Nigerian-founded job search engine, for almost four years.

Two months after leaving Jobberman, he became the principal software engineer at supermart.ng, an online grocery shop, and soon secured the role of technology team lead, a position he held for three years and three months.