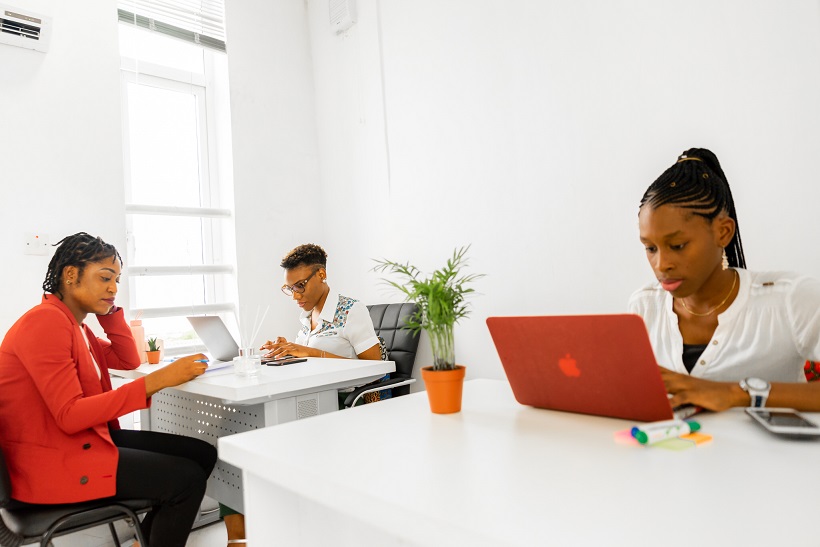 There is a general perception that the tech industry has the lowest number of women and highest gender imbalance of all other industries and professions.

According to a Statista study of 8 major tech companies in the U.S.; Netflix, Uber, Facebook, Amazon, Twitter, Apple, Google, and Microsoft, women make up about 26 and 43 percent of their entire workforce.

This number is somewhat representative of the situation globally. Africa is even worse because of its contexts, beliefs and biases.

For Yvonne Onyinye Alozie, a Nigerian woman, transitioning into a tech career path was a herculean task.

“It was an uphill battle starting. There was insufficient and near zero support along the way,” she says.

Even those already in tech related fields do not have it easier.

“Most women in tech either started late, did not have good accountability processes or were just not exposed to the same opportunities as their male colleagues. Or all of the above. It generally is not a level playing ground for these women.” Yvonne says.

Yvonne founded Gitgirl to solve this problem. Gitgirl is a social impact organisation that wants to help more African women reduce the hurdles they face getting into tech careers and completely reduce them over time.”

For most tech companies, closing the gender gap has become a thing of political correctness and conformity.

The team at Gitgirl says bridging this gender gap in tech is its sole mission and purpose of existence.

To do this, programmes are targeted at women; tech beginners or newbies, young and old who have enough passion to pursue their curiosity in tech until they can build a career from it.

In the beginning, the plan was to train 10 women annually, but research showed many women of all ages can benefit. Now Gitgirl is looking to train 13 million African women over a 100-year period. Or less.

As ambitiously exciting as this number looks, the team at Gitgirl says it is more than  an uninformed estimate and wishful thinking. According to Yvonne,

“Thirteen million came from our business plan and calculations. Gitgirl is trying to solve a major problem that has been on for generations and we don’t think we can do that in 1 year or 2, so we do not want to peg specific timelines to this figure or make it a race of sorts. We intend to train 10,000 women annually and gradually work the number up over the years.”

The current coding programme offers 24 weeks of online, intensive instruction “designed to turn participants into web developers or data analysts”. This time is divided into a 4-week bootcamp, then 20 weeks of team projects and learning.

In this period the women will learn programming fundamentals in HTML, CSS, JavaScript for front-end development. A data analytics track will teach fundamentals of SQL and BI Analytics.

Daisy, a Nigerian woman currently enrolled in the data analytics track of the Gitgirl programme works in the Compensation and Benefits sector of the Human Resources industry.

She says the structured nature of the Gitgirl programme and an expansive curriculum were main attractions for her.

“I have been studying by myself, but Gitgirl has a structure that I felt would make it easier to learn. And the fact that it’s mostly women was one of the selling points too.”

“In learning this, I am able to switch career if the opportunity arises, or use it to improve on my current role.”

Why is Gitgirl solely online?

Yvonne says it is not.

“Even though the women learn from the comfort of their home, we recommend they sign up with a particular physical location to enjoy the full benefits of the programme like weekly yoga classes and monthly study hangouts. We currently have two physical locations in Lagos and Abuja, Nigeria.”

There are also weekly relaxation and Yoga classes every Thursday. This sessions are optional for students.

As small as this amount is, it may still be largely unaffordable for its target market, considering the gender pay gap in most industries.

Gitgirl says it wants to offer all these programmes free of charge, but cites financial challenges.

According to founder Yvonne,

“This particular programme is tailored for women who are already earning and want to make a career switch or up skill. And as a nonprofit, monies realised from this will be ploughed back into future programmes for younger or unemployed women.”

Even this current paid pricing will be reduced in the future. Yvonne says the organisation intends to drop prices lower after every donation or grant milestone reached.

How is this different?

Over the years, there has been a sizeable number of efforts to teach the African girl-child to code. What is Gitgirl doing differently?

“We want to make as much impactful change as we can. Beyond just teaching code, Gitgirl has a lot of plans for African women and how students can impact their immediate environment with technology and solve problems,” Yvonne says.

For starters, Gitgirl wants to change how women perceive themselves in relation to technology. According to the team, its flagship“Code’n Wine Bootcamp”  is basically saying “you can be a woman in tech and still be a woman”.

“What we did with Code and Wine is design a curriculum for women who have a busy lifestyle and still want to transition to tech careers. The hangout is a physical community to support this women and help them with accountability.”

From having a full campus to creating more programmes, Gitgirl has a lot of plans down the line.

“In 2019 we want to have instructors and onsite locations for students to drop in. Full physical campuses are in our 3-4 years plans,” Yvonne says.

She also hints at a similar monthly programme for undergraduates and younger women that will be free of charge.

In all, Gitgirl says it intends to keep working with women throughout the journey, from setting initial goals, to providing access to continuous learning, job search to help them launch their new career.