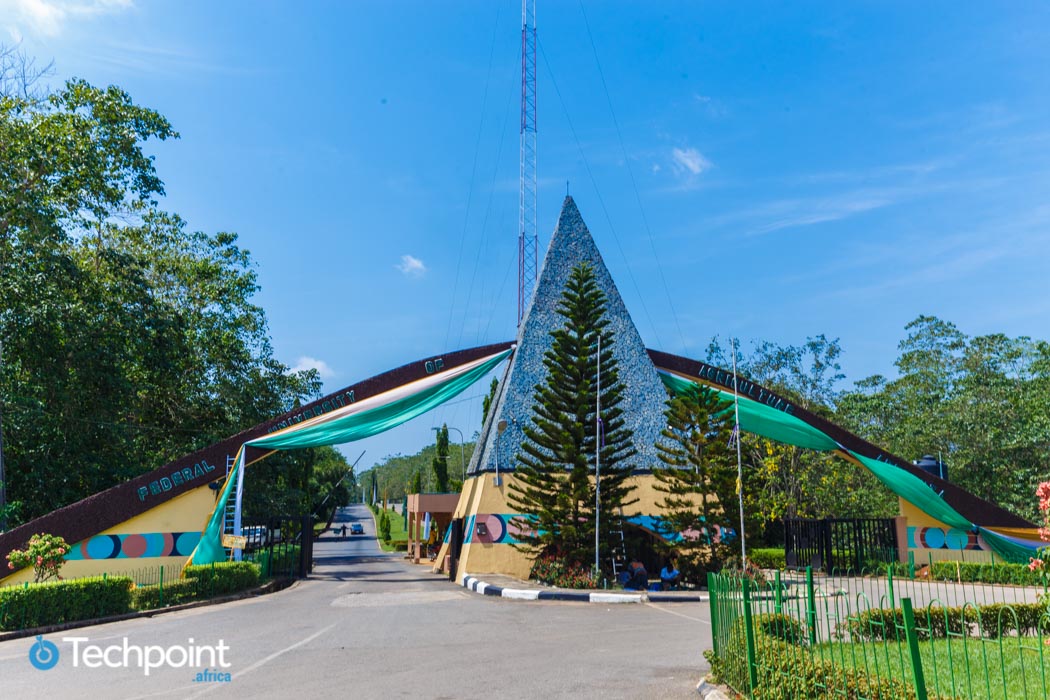 Day twelve of the Techpoint Innovation Tour started with preparations to leave Ibadan for Abeokuta. By 8:20 AM, everyone was already in the bus and food arrived a couple of minutes later. We had our breakfast in the bus and left immediately.

On the way out of Ibadan, we dropped by at the compound that houses the famous Cocoa House to get some items at the mall for the meetup in Abeokuta.

We eventually left Ibadan and arrived in Abeokuta, the capital of Ogun State about an hour and a half later.

Our first port of call was the Federal University of Agriculture Abeokuta (FUNAAB). We stopped by at the Senate House that houses the school’s radio station — FUNAAB Radio 89.5 FM — where Victor and Muyiwa were interviewed on a live programme.

While they were on air, some members of the crew headed to the Faculty of Physical Sciences.

They met with the Head of Department of the Computer Science department, Dr ‘Bukola Onashoga, who is also an associate professor of computer science and information security.

The crew regrouped at the school’s senate building by 1:07 PM and left the school some minutes later.

We branched at the hotel to drop our bags before going to RockSpace — the venue for the Abeokuta meetup.

There were already attendees on ground when we got there by 2:45pm, but we didn’t start until 4:00.

Prior to starting, Ifeanyi and Muyiwa had a chat with the founders of Pickmeup Ride, the duo of Oretuga Adewale and Adeitan Abimbola.

Afterwards, Kayode Adebiyi, Ibukun Olusola and Ishola Adebayo — the co-founders of RockSpace — also shared the story of the working space with Ifeanyi and Muyiwa.

Victor took the stage to kick-start the meetup at exactly 4:01 PM.

An engaging coversation about the nascent tech community in Abeokuta followed after, moderated by Muyiwa.

The crew left RockSpace at 6:19 PM for a look around before dinner, after which we headed back to the hotel to relax for the day.