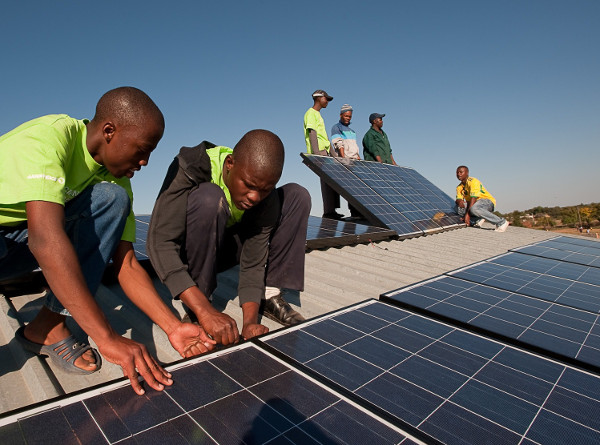 The Central Bank of Nigeria (CBN) recently announced plans to strengthen the drive for renewable energy in Nigeria. The initiative, it states, is part of the country’s economic sustainability plan, a policy response to the effect of the pandemic.

According to the CBN, players in the renewable energy sector should have access to credit facilities of up to ₦500 billion (~$1.3 million) to provide electricity for off-grid rural communities in Nigeria.

This is significant given that the federal government stated that it would facilitate the participation of private sector solar providers to deploy solar power to five million households in communities that do not have access to on-grid connections.

Since the Demographic and Health Surveys (DHS) Program avers that each Nigerian household has an average of five people, 25 million people might get access to electricity.

The CBN’s document, titled, the “Framework For Implementation Of The Solar Connection Facility” seems to be a step towards achieving this goal.

Recall that the Nigeria Economic Sustainability Plan (NESP) contained plans to provide relief funds for startups and SMEs, and create up to a million tech jobs, among other provisions.

Nigeria wants to save startups, SMEs, and create a million tech jobs

While few updates have been given on the other initiatives, the solar facilities project seems to have hit high gear, and the CBN believes it can create 250,000 jobs in the solar energy sector.

Some effects of Nigeria’s power problem

An International Energy Agency (IEA) report reveals that since 1990 the demand for electricity in Africa has steadily outgrown its supply, creating a massive power deficit.

In a previous article, we highlighted the fact that power is a crucial factor in the Nigerian government’s plans to save SMEs and startups. Though the initiative seems laudable on its own, it raises several questions when the plan to save startups/SMEs is put in context.

Over the years, the lack of reliable power has curtailed Nigeria’s economic activities, especially on the part of SMEs and startups. Nearly every entrepreneur has had to invest in backup power supply, most times in the form of expensive generators that need to be fuelled by petroleum products which have also increased in cost.

Some startups even have to invest heavily in off-grid energy, as shown by this TechCabal report.

This problem has also been highlighted by tech entrepreneurs in Nigeria, and for some of them, the fact that they’ve had to provide basic amenities such as power for themselves might be enough excuse not to pay taxes.

The problem is not just peculiar to SMEs and startups, as even large corporations and manufacturing giants still face the same issues.

Funke Opeke, CEO of MainOne, one of Africa’s largest Internet infrastructure and data centre providers, revealed that the company still has to invest in collocation facilities and various power solutions that serve as backup to each other, despite being connected directly to the national grid.

In a report, Herbert Ajayi, President of the Nigerian Association of Chambers of Commerce, Industry, Mines, and Agriculture (NACCIMA) stated that between 2009 and 2011, 800 companies shut down due to the harsh business environment resulting from poor infrastructure and epileptic power supply.

Over the years, rural-urban migration in Nigeria has steadily increased, and according to the latest data from the World Bank, Nigeria’s rural population stands at 48.8%.

According to Adekunle* an executive at a renewable energy startup, the government’s provision allows them to provide mini-grid systems for rural locations that do not have Internet connectivity or motorable roads.

The economic practices in most of these places are usually agriculture-based with little to no industrial or Internet activity.

Contrastingly, the teeming population in urban areas places more pressure on the on-grid system. Large companies, startups, and SMEs are found more in urban areas like Lagos, Abuja, and Port Harcourt than in other locations.

In the past month, power bills were increased for those connected to the national grid and the cost of fuel has also increased. But as Adekunle explains, the activities of solar operators are very restricted in urban areas.

The IEA says this scenario calls for dynamism in policymaking in light of falling costs of renewable energy alternatives that open up new avenues for innovation around the world.

AfricArena, in its State of Tech in Africa report, reveals that roughly 600 million homes in Africa lack access to reliable electricity, representing a huge potential for the off-grid energy market in the continent.

On the plus side, startups engaged in the manufacturing and assembly of solar equipment stand to benefit from the Nigerian government’s initiative and could contribute to the overall development of renewable energy technology around the country.

A move to bring off-grid energy to unreached places might be laudable, but SMEs and startups in Nigeria must benefit from initiatives that will boost power supply in places where the bulk of these businesses are located.