Why conflicts in Ikeja Computer Village may not be over yet 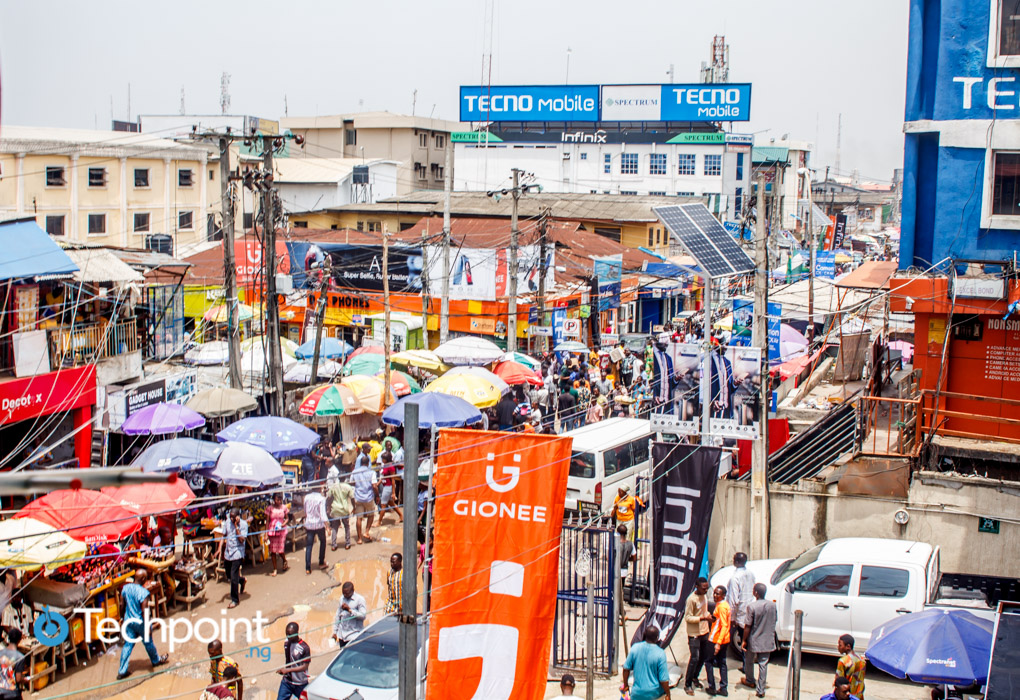 The rejection of traditional market leaders — Iyaloja and Babaloja — at Computer Village, Ikeja took another turn when businesses resumed after the unavoidable closure of the larger part of the economy following lockdown directives in Lagos state.

It appears the bad relationship between seller associations and the new leadership in the phone and computer hub has become more noticeable due to a request for the payment of monthly dues.

Techpoint Africa confirmed from the Iyaloja, Abisola Azeez, and some traders in the market, that it is a monthly payment of ₦1,000 ($2.75) by every shop in the technology community, as against claims of ₦5 million ($13,768.5) daily remittances.

While a few traders seem to be unclear about plans for the levy, Azeez cleared the air with this explanation.

“We use the money to run this place. Security, environmental, and maintenance of facilities all require money.”

This tussle reportedly took a different turn on Monday, June 1 with unconfirmed claims that the coalition of trader associations in the market protested against the imposition of levies by the Iyaloja-General of the state, Folasade Tinubu-Ojo.

Adeleke and Segun, who are CD and laptop sellers in the market, confirmed the disruption in market activities on that day because of news of the protest.

However, Azeez said normal activities took place in the market on the said date. Apart from the current reduction in market days to three — Mondays, Wednesdays, and Fridays — it has been business as usual at the marketplace.

In adherence to the directive, albeit incomplete, the market wasn’t bustling with activity when Techpoint Africa visited on Thursday, June 11; the few shops open conducted their business secretly.

Shops were scantily opened at Computer Village on Thursday, June 11

Adding to this, she stated that the directive given only served as a reminder of information which was passed across months ago.

“We had written a letter eight months ago saying that everybody should start paying ₦1,000 ($2.75) every month, but people did not respond.”

A memo requesting for payment of dues

Ahmed Ojikutu, President of the Computer and Allied Product Dealers Association of Nigeria (CAPDAN), said in this statement that the dues were unnecessary because of the heavy tax already imposed on traders.

He also mentioned that the new leadership has allegations against them and that the traders do not accept their Iyaloja/Babaloja status. Consequently, they are not ready to lend them their support.

Azeez, however, claims that there’s been no resistance from the traders and shop owners.

“Members of these associations are paying, but the leadership is saying they don’t want to pay. At least if they are complaining they will not pay and we will have to enforce payment. We didn’t enforce this payment, people are willingly paying into the account.”

In another report, one Nonso Bethel, spokesperson for the coalition of trade unions in Computer Village, claimed that the Iyaloja/Babaloja office have louts that extort money from traders.

In a counter-argument, Azeez claimed that this is the first levy to be requested from the traders since their assumption of office.

“Before now, we have never requested for any dues, and that is probably what caused this reaction.

“We have had some donations but we can’t keep bothering companies to give us money when people are doing multimillion naira businesses in this market. I don’t believe that ₦1,000 ($2.75) monthly, that is ₦12,000 ($33) yearly or less than ₦50 ($0.14) daily, is too much. We believe this is fair to everyone in the village.”

She explains that the money has been earmarked for things previously catered for by donations from companies.

Although triggered by the imposition of the levy, this protest is just another expression of the trade associations’ rejection of the traditional leaders’ positions one year after their installation.

A fear which was expressed by one trader when the positions were occupied is that more levies may arise even with the taxes already being paid. But he suspected the levies would be for traditional purposes. However, it is clear that these dues are not meant for such reasons based on Azeez’s statement.

There are at least ten trade associations in the community that have always banded together and spoken up whenever there are new rules or developments threatening the interest of the market or an unanticipated change.

In 2018, Ojikutu commented that the proposed relocation of the market to the ICT Park, Katangowa would only happen if the terms and conditions were clear and did not threaten the unity of the market.

This project, said to be completed not earlier than 2020, does not appear close to the end six months into the year. Nonetheless, as of January, events prove that work is ongoing. The last statement was a reassurance from the government that stakeholders are actively working on the site.

Similarly, when the Babatunde Fashola regime introduced taxes, which resulted in the closure of the Village, these associations led the opposition. Also, recall that there were protests that disrupted economic activities in the community when these leaders were installed in May 2019.

Though not explicitly stated, the recent turn of events in Nigeria’s largest technology hub suggests that members of associations are feeling the effects of their leaders’ decisions and the consequent reactions of the community’s leaders.

Considering the government backing enjoyed by these traditional leaders, how long these associations will kick against them is anyone’s guess. And with no truce in the offing, it is not clear how many more clashes there will be going forward.