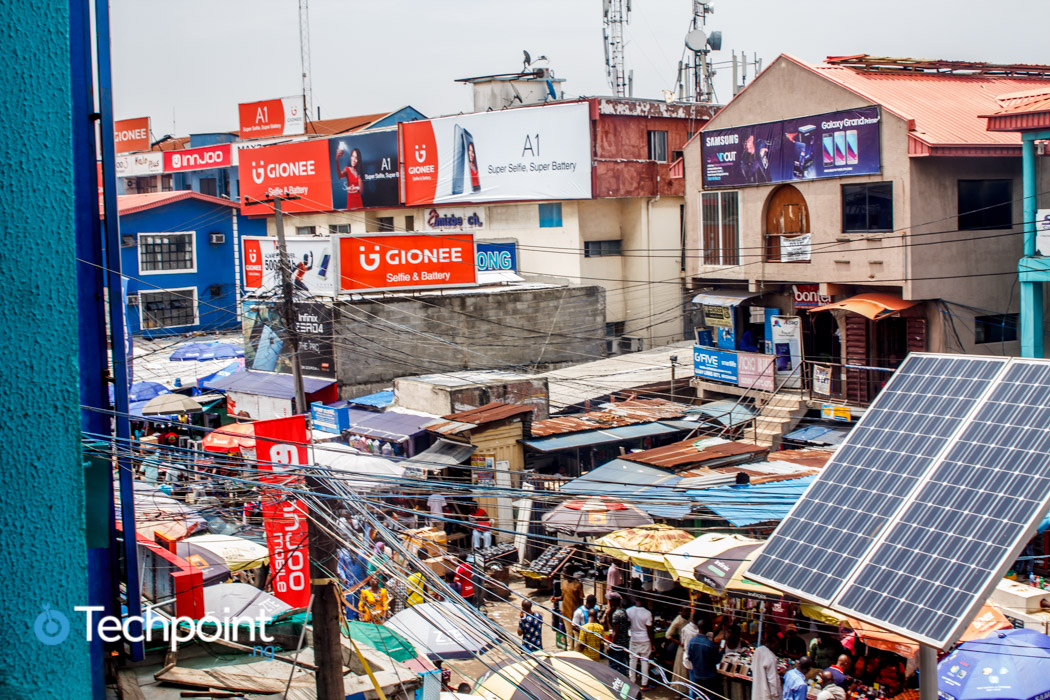 It is the 3rd of May 2019, a few minutes past 12 PM and a fairly hot afternoon at the famous Computer Village, Ikeja, Nigeria’s foremost ICT market.

So forward-looking is the situation at hand; people plunged headlong into the crowd in pursuit of their daily businesses. Save for a passerby who almost tripped and fell, while trying to manoeuvre the crowd, the atmosphere is filled with a characteristic enthusiasm.

But two days before, an air of stillness enveloped the market and, in a quick sweep, turned its usually bustling streets into a shadow of itself.

As usual, the market gates were wide open, but traders could not dare open their shops.

Traders shut down activities on Tuesday to protest the impending installation.

The sudden atmosphere in the market was as a result of a protest reportedly staged by shop owners to stop the impending installation of an Iyaloja and Balaloja (traditional market leaders) in the technology hub.

But on this day, none of that mattered anymore. Shop owners went about their businesses, with little concern about what seemed already at their doorstep.

At the major entrances into the market are massive billboards, and hanging below them are congratulatory banners with two distinctive faces; the Iyaloja and Babaloja.

Apparently, their installation had been completed the day before. Hence the anxiety amongst shop owners in the market.

After much persuasion Eze, a phone accessory seller in the market, blurts out in a deep Igbo accent, “Wetin you want make I talk now? Government nor dey do wetin we like. Na wetin dem like dem dey give us.”

In proper English this translates as, “What do you want me to say? Government hardly gives us what we want but instead impose their will and interests on us.”

Lazarus, an engineer who specialises in phone repairs, says the Iyaloja or Babaloja are necessary only as representatives to the supreme traditional ruler (the king) but even at that, such stance undermines the relevance of Computer Village, Ikeja.

“When the king wants to talk to the market women or men, he does so through his representatives. And my understanding of governance like this is that it is applicable to markets that deal with clothing and perishable foods like fruits and pepper,” he says.

For Obinna, a shop owner inside the market, there is really no need for market leaders like an Iyaloja and Balaloja when the market already has an existing leadership structure.

“I am very sure that the government is aware of our trader associations. There was a time when ex-governor, Fashola locked down Computer Village over the issue of tax, it was these same associations that went to him on behalf of the market to get it resolved,” he recalls.

Across the market is an atmosphere of nervous apprehension about the new managerial system.

Which then begs the question of what leadership in the market looked like before the installation of an Iyaloja and Babaloja; supposed “traditional” market leaders.

Since the introduction of the Global System for Mobile (GSM) into Nigeria in 2001, Computer Village, Ikeja has quickly evolved into an electronic market for phones, laptops and repairs with a global appeal.

Many now describe the hub as a business flourishing zone, and rightly so, as yearly revenue generated by the range of business activities in Computer Village is estimated at a whopping $2 billion.

But long before the streets of Ikeja evolved into the technology hub which it is today, the area was established under the control of the Ogunbiyi Community Development Association (CDA) for residential purposes.

Kola* tells a tale of how the transformation of Computer Village, Ikeja wasn’t exactly planned.

“The market was never planned to be what it is today. Activities sprang up seemingly from nowhere and they grew very fast to what we now know the market as.”

For a perfect market which largely was self-regulated at the beginning, it faced dangers of an implosion as a result of its commercial scale over a quick span.

“Because of the way we were growing, there was a need for organisation and proper leadership,” Kola highlights.

What they didn’t envisage was that it would spiral issues of ethnicity and tussle for leadership that sought to tear the business community apart.

The CDA believes control of the market is theirs by right and ethnic biases on the other hand have spurred the proliferation of many associations in Computer Village.

According to Kola, there are at least 10 associations with different ideological beliefs — mostly split along ethnic lines — within the technology community. As a matter of fact, he himself happens to be one of the minority leaders in the market.

He opines that it was in the interest of bringing stability in leadership that the government stepped in, although many remain in doubt as to whether or not this was an affair of the government to begin with.

Mandate of the traditional leaders

On the surface, it would seem that the claim of the Iyaloja and Balaloja to the leadership of Computer Village Ikeja is merely by the declaration of the Iyaloja General, the supreme traditional leader of all markets in Lagos. But it turns out the Lagos State Government has a gazette on this, under the Lagos State Market Board, which dates far back as 1981.

Madam Ifeyinwa Omowole, a veteran journalist and age-long member of the News Agency of Nigeria (NAN), shares some insight into the phenomenon.

“Lagos owes part of its sustained commercial growth to its market system, which is largely informal. It was an effort to organise that informal sector that led ex-governor, Babatunde Fashola to reorganise the Lagos State Market Board (LSMB) on December 17, 2009.”

The constitutional provisions of LSMB allow it to oversee all market operations in the state, including the selection of someone to lead any chosen market.

By and large, Computer Village, situated in the capital city of Ikeja, is considered one of such informal markets.

Since the death of Alhaja (Chief) Dr. Abibat Mogaji, founding chairman of LSMB, Folashade Tinubu-Ojo has taken the role of Iyaloja General.

And upon her mandate were Abisolat Azeez Raolat and Adeniyi Olasoji chosen as the respective Iyaloja and Babaloja of the famous phone and computer hub.

Blurred lines between tradition and innovation

The fear of change is primal in humans and understandably so with the appointment of Abisolat Azeez Raolat and Adeniyi Olasoji.

The name Iyaloja/Babaloja in itself has a traditional undertone that hits many with great suspicion, as religion and commerce is not something that is intricately intertwined in the technology hub.

This skepticism is evidenced among the dwellers in the market. A shop attendant, who simply refers to himself as ‘Alfa’, asks rather brashly, “are they coming to enforce people to do something regarding their faith?”

Others worry about the imposition of levies that such traditional positions demand.

“We are fine with paying our normal taxes and levies, although I fear we may be adding money for this festival and that festival to the bills. I do not see the value such adds to us in the market,” says Lazarus about the implications of traditional leaders in the technology hub.

Lagos is ancestrally Yoruba. Its people have a brazen regard for culture and are headstrong about preserving it. At the same time, Lagos is Nigeria’s commercial capital, and the dream-seekers who have come from all parts of the country into its various markets communicate in mostly English or the unofficial lingua franca of Pidgin.

So wouldn’t it appear somewhat absurd to disregard the basic elements that drive progress in the said Computer Village market because of tradition?

Adigun, who has been in the market for nearly a decade, says innovation can go side by side with tradition.

“Look at the Ooni of Ife for instance,” he begins, “he goes around the world representing Nigeria. So also, both the Iyaloja and Babaloja can represent everybody in Computer Village, Ikeja. Neither will their roles deprive any of the associations from working.”

Adigun’s view is also shared by Madam Ifeyinwa who says that Computer Village Ikeja, like other markets, will always observe traditional rites of Lagos regardless of the appointment of an Iyaloja and Balaloja.

“Even the famous Alaba international market is headed by an Iyaloja, so I don’t see any reason why having one in Computer Village, Ikeja should be a thing of debate,” she says.

Computer Village, with all its faults, has become a necessity. And for the traders and street hustlers that greet the market daily, the only thing as bad as giving up their dreams of what it ought to be is seeing the government not on their side.

They’ve seen this happen before in ex-governor Babatunde Fashola’s regime where their markets were closed for days at the dawn of the introduction of taxes in the market and again in the attempt to relocate Computer Village, Ikeja to Katangowa during the tenure of outgoing governor, Akinwunmi Ambode.

Their clamour is for a leadership that understands their pain and is willing to put the needs of the market first rather than pander to the whims of the government.

There, lies the first step of a journey for Abisolat Azeez Raolat and Adeniyi Olasoji in building trust among rank and files within the market, seeing as their appointment has the hands of the government written all over it.

But if the antecedents of Abisola Azeez Raolat, the Iyaloja of the market, are anything to go by, then this new administration could herald much needed change for Computer Village. However, nothing is guaranteed.

This year 2019 would mark the twentieth year of the existence of the Computer village community. Perhaps, it’s just the right moment to rewrite its history.