How government and civil societies fought against the Social Media Bill 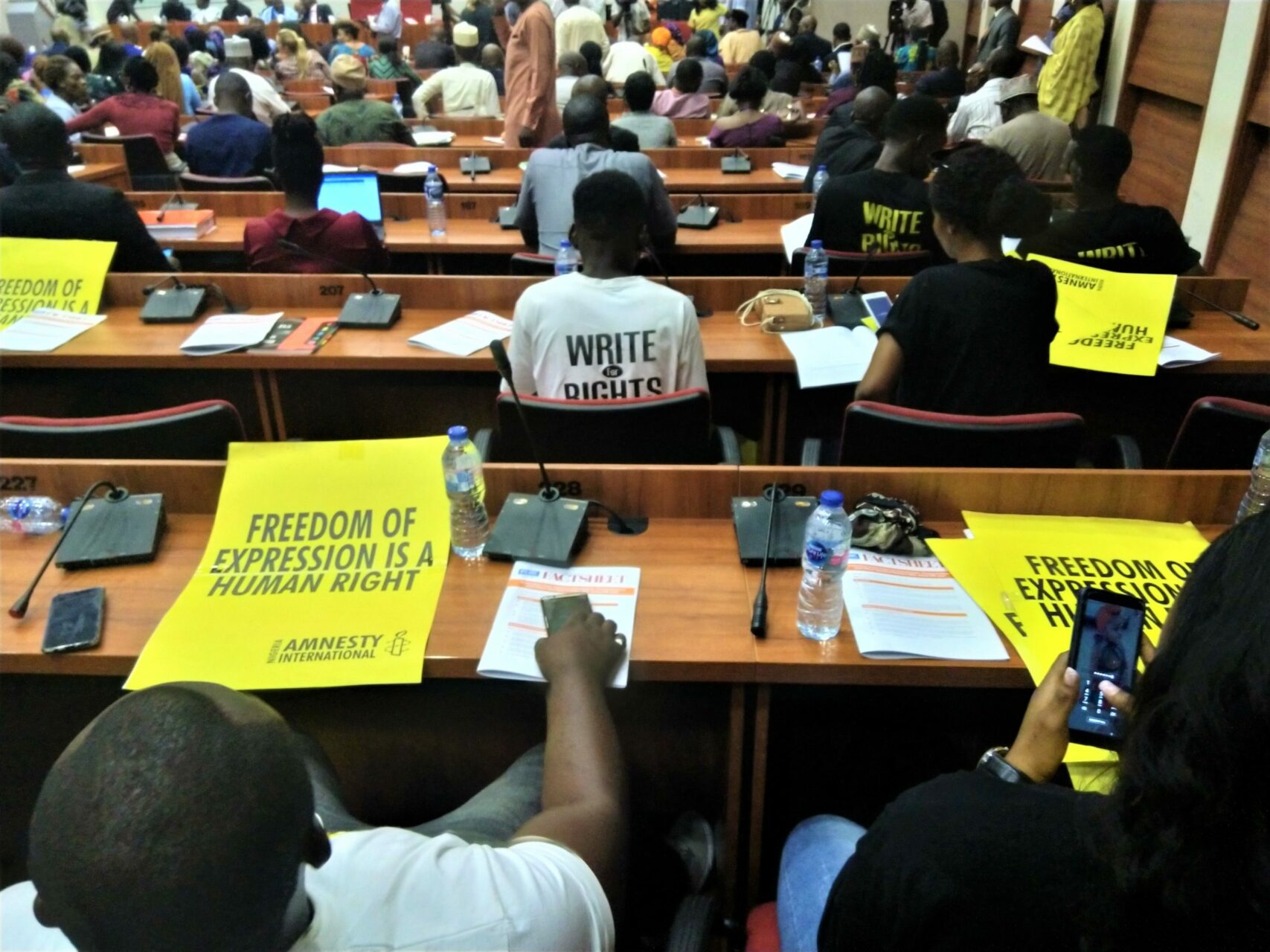 The public hearing for the much-debated Protection from Internet Falsehood, Manipulations, and other Related Matters Bill, 2019 — otherwise dubbed the Social Media Bill — took place in a packed conference hall at the National Assembly Complex, Abuja on Monday.

The senators and other stakeholders reiterated the importance of the public hearing as a central aspect of the legislative making process in Nigeria. This was especially relevant for a Bill that, on closer inspection, threatens to strip Nigerians of their right to freedom of expression and gives the Nigeria Police Force near-unlimited powers online.

The members of the Senate Committee for Judiciary, Human Rights, and Legal Matters stated that over 60 presentations by senators and representatives of civil, government, and private institutions were prepared and submitted, arguing for and against the Bill.

Arguments for the Bill

The Bill’s sponsor – Senator Mohammed Sani Musa representing Niger state – compared the Bill in question to the actions even more developed nations like the United Kingdom and Singapore have taken to safeguard their national security.

First from the left – Senator Mohammed Sani, the bill’s sponsor

Moving from the Bill’s potential to fight against every perceived criminal and moral offence online, from the distribution of child pornography to data protection for Nigerians, he submitted that the Bill would ensure the protection of human dignity online – where no one would use Photoshop to manipulate your image and share it on social media.

Claiming to have used social media for years, the senator insisted that there must be a line between protecting national security and the freedom of expression online, which he believes this Bill would help draw.

The Nigerian Army also showed support for the Bill, citing issues with tackling the prevalence of fake news around the military’s activities, improving the morale of the troops, and tackling national security as a whole.

Arguments against the Bill

Except for the full support given by the Nigerian Army, the Social Media Bill was vehemently argued against by many civil and governmental organisations, that called it an unnecessary piece of “legislative overkill” given the many laws in the country that already cater to what the Bill proposes to mitigate.

The Bill is notable for its use of ambiguous language, its sponsor’s lack of knowledge in the technology used to spread misinformation online, and for the power it vests on the Nigeria Police Force in applying the clauses contained.

The Executive Vice Chairman (EVC) of the Nigerian Communications Commission (NCC) rejected the Bill for most of the reasons other government and civil organisations did.

One of which was the sponsor’s lack of knowledge of what it takes to implement the proposed provisions contained therein.

“Certain provisions of the Bill are difficult to implement since majority of the websites online media, online locations are hosted outside the shores of this country [Nigeria].”

The EVC also brought the senate committee’s attention to the fact that,

“…certain provisions in the Bill could be used to violate citizens’ rights, free speech and  potentially, our human rights.”

The Bill, according to the EVC, gives too much power to the Nigeria Police Force, an institution that a representative of the Centre for Democracy and Development described as, “underfunded and digitally apathetic.” It would allow the Police such powers,

“…to the extent of being the judge in deciding what constitutes falsehood, the jury…and the executioner in taking the necessary actions.”

Another argument repeated by many against the Bill is that it tries to cover what other laws of Nigeria already do. “For example,” said the NCC boss, “the Cybercrime (Prohibition, Prevention, etc.) Act of 2015 and the Advance Fee Fraud and other Fraud Related Offences Act 2006.”

Based on the opinions of the NCC, it was recommended that the Bill go through a “complete redraft to ensure it aligns with existing laws.”

Some organisations like Amnesty International believed that the Bill had not satisfied the basic requirements allowed by the Nigerian Constitution to restrict the freedom of expression of Nigerians.

Considering the legislation a threat to freedom of expression in Nigeria, the country director for Amnesty International Nigeria, Osai Ojigho, reminded the senate committee that Nigeria, being a signatory of international charters, had expressly promised not to do the very thing the Bill promises to do by disregarding the rights of its citizens.

In the weeks leading to the public hearing of the Protection from Internet Falsehood and Manipulation, and other Related Matters Bill, the senate committee in charge of analysing the usefulness of the proposed legislation had been bombarded with messages calling for the Bill’s withdrawal. As stated by members of the committee, the pressure is on the members of the committee from both sides of the argument.

The fact that such a Bill was considered at all shows that there is a possibility that the senate committee may recommend it. Nigerians can only wait and see if their lawmakers are on the side of democracy or not.