DevCareer received a £5,000 donation from Twitter CEO; a sign of things to come for the nonprofit tech accelerator 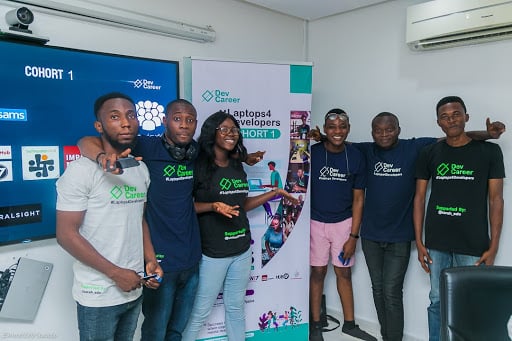 The accelerator which has been in operations for a year now is solely run via fundraising efforts organised by Sultan and Anifah Bhadmus. Recently, it received a £5,000 (~$6,500) donation from Twitter CEO, Jack Dorsey, via GoFundMe for its Laptops4Developers project.

Here, Sultan tells us about the accelerator’s journey so far, Dorsey’s donation, and what to look forward to.

What is DevCareer about and why is the Laptops4Developers project important?

It’s about creating opportunities for people who are held back due to lack of resources to pursue a desired career in software development in Africa. It’s certain that a lot of things can slow down the journey of budding developers, especially in Africa where some countries do not have basic amenities in abundance or share the privilege of getting products on a long-term payment plan. Budding developers have to face bad electricity and slow or no Internet access, then there’s a problem of getting the right course, a good laptop, and finally, a mentor.

While it’s not 100% necessary to have all these resources at a 100% efficiency, they are all really needed. We have people who have been into programming for close to two years and are still at the beginner level,  and we have people who are getting close to being called senior developers in just three years. While these people might have the same zeal to learn and progress in tech, often, the former’s growth is stunted by lack of resources.

What prompted your decision to start the project?

Actually, the initial plan was not to start a non-profit; it was just a tweet about fundraising ₦1 million to give out laptops to ten budding developers who couldn’t afford it.

I want to publicly fund raise 1m to support 10 upcoming developers to get a good laptop + free course.

1. We will be giving out the laptops not the money. Buying in bulk

You want one? Indicate and tag potential sponsor.

But as the interest of the community got bigger and I started to see that the problem I faced years ago when I was starting my career —  I had to code and learn on a mobile phone — was still common, probably even more than before, I had to work on that and that was a major part of why I started working on DevCareer.

Suggested Read: DevCareer is on a mission to properly equip upcoming African developers

Now in its second cohort, how would you describe the journey so far?

Like every journey, it hasn’t been easy, especially when I face issues regarding my identity and why I don’t have my face showing online. I get several comments on that and it’s fun.

So far, we’ve been able to work with various mentors and organisations.

DevCareer recently received a £5,000 donation from Twitter CEO, Jack Dorsey, for the project. How did that come about?

We cannot take credit for the £5,000 donation from Jack Dorsey. I had no idea something like that was going to happen, I did not send any email or reach out directly. This was of his goodwill and we are completely grateful.

This is the highest single donation we’ve ever gotten, and that was the total Gofundme goal we had for cohort one, which took us over two months to reach.

What do you think this means for the developer community in Nigeria?

DevCareer is still a small startup program to speak for the diverse ecosystem in Nigeria, however, we have been on a sustainability plan for months.

Having raised £5,000 in the first cohort and exceeded the £10,000 target for the second cohort, what does the future hold for the accelerator?

The higher the funding, the higher the expectation, which is great. It is not yet certain if we will increase the total number of candidates we intended to choose for this cohort, but we’re working on that. We intend to keep the public aware of all our decisions while we share our financials and progress report with our supporters on Patreon. Also, we will be releasing a public progress report soon.