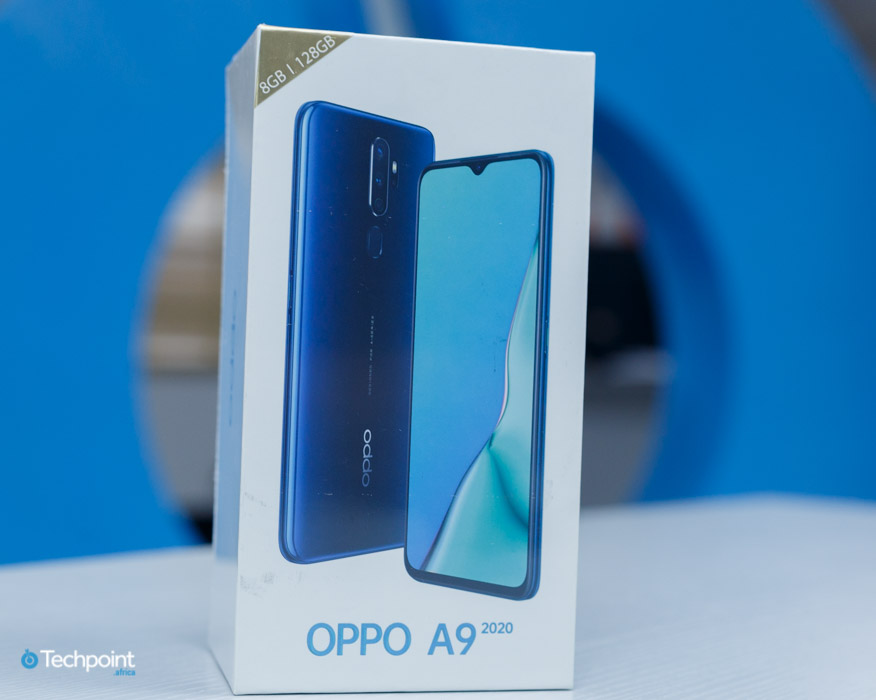 In early October, Oppo, a Chinese consumer electronics and mobile communications company, launched Oppo A9 2020 into the Nigerian market.

If you’re an aesthete, one of the things that would attract you to the Oppo A9 2020 is the space purple colour and the body which has a slippery glass back.

This slippery back makes the possibility of the phone falling out of one’s hand very high. Weighing 225 grams — case included — with a 6.2-inch screen, 89% Screen-to-body ratio — I found out that it wasn’t really the easiest phone to hold.

The 8GB RAM and 128GB ROM phone has a triple camera, an LED flash, a fingerprint scanner, and the branded logo in a vertical order at the centre. The speaker, USB Type-C port, and microphone port are placed at the bottom of the phone.

However, it is disappointing that it doesn’t have an LED notification light that can help users know when the battery is full and when new messages arrive.

Surprisingly, the volume button is on the left side of the phone while the power button is on the right. This button positioning made it difficult to take a screenshot because the position of the buttons differs from those of other smartphones I’ve used.

The phone has a side widget that can serve as a shortcut to as many apps as the user wants. It can also be dragged to either side of the phone for easy access. I didn’t really use it because I prefer using the full menu tray.

The Oppo A9 2020 can be secured by a passcode, fingerprint lock, or face recognition.

The oval fingerprint scanner, placed at the rear of the phone, is rather small and was not the easiest security option to use. While using the phone, I stuck with using face recognition and the 6-key passcode options.

Additionally, in a dark room, the screen brightness could be used to unlock the phone. Though it malfunctioned sometimes, it worked quite well when I had my glasses on.

Also, when attempting to lock the phone for the first time, it requested my email address as a recovery option.

The Oppo A9 2020 has five separate cameras. It consists of the main camera which is 48MP, 8MP — to take high-resolution images, two rear 2MP lenses for portrait effects and 16MP as the front AI beautification camera.

The 16MP front camera, which sits on top of the speaker and waterdrop screen, isn’t exactly perfect. When an image is captured, the selfie camera makes the face of the subject white and also gives a pale background — this also affects group pictures.

Under good lighting conditions, the rear camera is really good. It accentuates the colours in photos. The portrait mode will definitely get you in the mood to take more selfies, but I totally loved taking pictures with the rear camera.

The camera also has AI beautification that can smoothen the face, make it smaller or thinner, make the eyes bigger and nose smaller, and much more. However, I didn’t see the need to use it while taking a picture.

The sticker feature in the camera is a good one to have. It has a pool of characters one can take a selfie with — it also allows two people to take a selfie using the sticker like Snapchat.

For the panorama mode, I was able to capture a wide view without a wide lens in one attempt. However, this is a feature that would not be of much use to someone like me.

The phone has a flashlight that can be used when taking photographs or making videos. Unfortunately, it can’t be used in the portrait and panoramic modes, which is somewhat disappointing.

Subsequent to testing the camera in the dark, I discovered that the flash and the fill light provided strong enough lighting when there was not enough. The fill captures the image appropriately without pixelating the image.

Under proper lighting, the video shows every colour it captures beautifully. But when I  use the fill light, it lost focus and blurred the video. Nevertheless, tapping on the focus icon can fix this.

One of the ways videos on the Oppo A9 2020 can be edited is by speed adjustment; they can be slowed down and sped up by as much as 0.25x and 2x the original speed, respectively.

Another thing I found interesting was that soundtrack, filter, text, theme, and more could be added to a video when editing. This feature will be very useful for skit makers and visual storytellers.

The phone comes with a non-removable 5000 mAh battery, which explains why I was able to use it actively for 36 hours without needing to charge it. At some point, I was playing a game and I didn’t close the gaming app until the next morning — this didn’t drain the battery.

Though the battery lasts long, the phone doesn’t support fast charging technology; at 54% it took 4 hours and 20 minutes to get fully charged.

The speaker of the Oppo A9 2020 was one of the things I liked about the phone. It produced quality sound without screeching — the Dolby Atmos dual stereo speakers worked well.

What really stood out for me was the quad rear camera that made pictures really sharp and beautiful.

Another top-selling point of the phone for me was the battery because, in spite of how slowly it charged, it was able to manage heavy workloads for extended periods.

The storage capacity and premium look of the Oppo A9 2020 make it a good phone. However, the price will be another factor to consider because it is relatively expensive.