How MTN Nigeria gained over $1.8bn valuation within just 6 months on the NSE 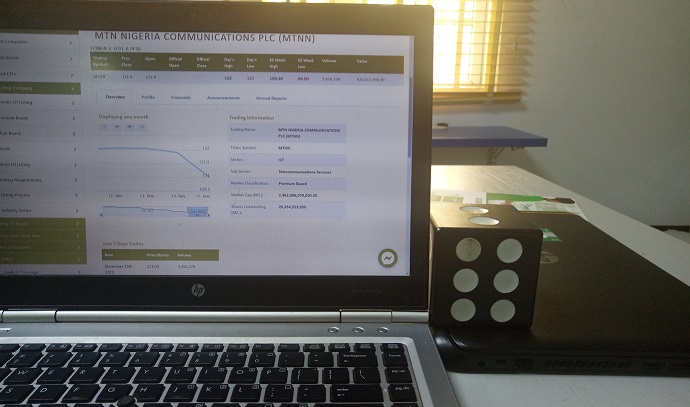 Whether it’s on the Nigerian Stock Exchange (NSE) or any foreign exchange, for most companies, going public could be a two-sided affair, and success or failure on any bourse is usually subject to a number of external influences.

Recent trends have shown that success in the stock market goes beyond listing on a more reputable stock market as some African-focused companies like Jumia and Transsion Holdings have done on other bourses, with mixed results.

Thus far, while Jumia shed $2.6 billion dollars in its first six months on the New York Stock Exchange (NYSE), Transsion Holdings, the parent company of Tecno, Infinix, and itel brands, currently has a market cap valuation of $4.9 billion after listing on China’s STAR Market just about a month ago.

In 2015, the Nigerian Communications Commission (NCC) imposed a fine of $5.2 billion (₦1.04 trillion by the exchange rates then) on MTN Nigeria for failing to disconnect unregistered lines.

After much negotiation, the fine was reduced to $916.2 million (₦330 billion) with listing on the local exchange as part of the conditions for the reduction.

While MTN’s IPO was expected to boost the NSE, not much could be predicted beforehand as a result of the relatively poor showings of most ICT firms on the bourse.

However, the All-Share Index of the NSE was boosted on MTN’s debut and in six months MTN has weathered all kinds of storms, gaining over $1.8 billion in the process to become Nigeria’s most valuable company, a position only the much older Dangote Cement manages to wrest away once in a while.

Trading as MTNN, the telecom giant’s share price increased by 10% to close trading for the day at ₦99 per share and a market cap of 2 trillion ($5.5 billion).

Suggested Read: MTN Nigeria breaks into top 5, after less than 2 days on the NSE

Barely 24 hours after the listing, MTNN broke into the top 5 on the NSE, topping the gainer’s table at the close of trading for May 17, 2019.

Such good numbers probably attracted lots of investors during the early days and saw the telecom giant earn a bullish run that peaked at ₦159 ($0.44) per share during trading before closing at ₦149 ($0.41) on May 23, 2019.

During this period, some reports also suggested that the company’s shareholders engaged in off-market sales which probably made the price to keep going up.

Around this period, there were unconfirmed reports of an investigation into MTN by the Economic and Financial Crimes Commission (EFCC). However, these were vehemently denied by the telco and the Securities and Exchange Commission (SEC).

On the last day of May, MTN released its financial results for full-year 2018 and investors were reportedly advised to hold off on trading.

While the report recorded good numbers for the South Africa-owned company, the rush and excitement for MTNN’s shares waned a bit as the reported earnings per share may not have convinced investors to keep scrambling for its shares.

Also, MTN’s issues with the Nigerian government, which include the lingering case with the office of the attorney general of the federation and a fresh tax dispute with the FIRS, may have done little to boost investor’s confidence.

On July 9, 2019, Airtel Africa became the second telco to list on the NSE, seemingly pushing down slightly on MTN’s shares once more.

On July 25, Pascal Dozie, Chairman of MTN Nigeria announced his exit alongside four other top executives.

The following day there was probably a nervous reaction from investors as MTNN’s share price fell from ₦127 to ₦125 per share.

The battle of the giants

Closing its first day of trading with a market cap of ₦2 trillion, MTN became the second most valuable company on the bourse, behind Dangote Cement, but in the month of August, it gave the country’s largest firm a good run on the NSE.

On August 19, an increase in the value of MTN’s shares saw it leapfrog Dangote Cement, but this was short-lived as it dropped the next day and Dangote Cement took its place at the top.

However, MTN blew past Dangote, gaining a whopping 11% in the value of its shares which started August at ₦127 but became ₦141 by the end of the month.

This gain saw its valuation rise to ₦2.86 trillion, over ₦1 trillion added to its initial valuation of ₦1.83 trillion and ₦100 billion more than Dangote Cement that stood at 2.76 trillion. Since then, both companies have kept switching places at the top, and at the close of trading for its six month period, MTN had a market cap of ₦2.462 trillion while Dangote’s was at ₦2.469 trillion.

Since the month of May, MTNN has evidently gained over ₦632 billion ($1.8 billion) while Dangote Cement has lost roughly ₦531 billion ($1.45) billion in valuation within the same period.

Earlier in September, reports of xenophobic attacks on Nigerians in South Africa caused widespread outrage across the nation. Seemingly fueled by reports on social media, anti-xenophobia attacks sprang up in different parts of the country.

Consequently, MTN offices and retail outlets in Nigeria were forced to shut down as there were reported attacks on South African businesses.

In response, MTN’s share price fluctuated narrowly on the NSE and eventually fell by close of trading for the day as investor confidence seemed to drop ever so slightly.

But once more the prices are falling

The trajectory for MTN Nigeria’s share price in six months

The trend started at the beginning of October, and in the course of the month, MTN lost 667,345 Internet subscribers. Also telling was the strange narrative of USSD charges for banking services, a saga that began with an SMS to its customers.

Strangely enough, MTN released its financial statements for nine months ending September 2019. It recorded yet another round of profits but its numbers do not appear to be convincing enough for investors to place a higher value on its share price.

Flatlines and drops between October and November

After largely flat-lining for much of October, MTNN’s share price has been reducing steadily and is seemingly yet to regain the confidence of investors but based on precedence, it could bounce back, once more.