There’s a new commercial motorcycle startup in Lagos, but it is nothing like Gokada or MAX 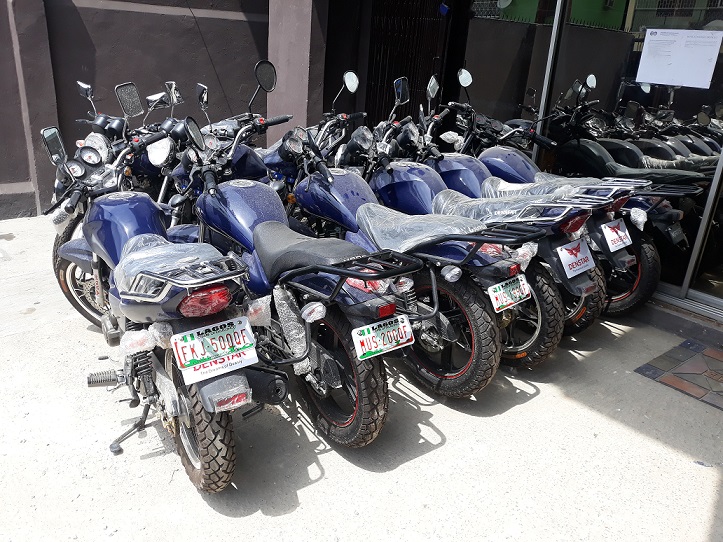 UPDATE (March 22, 10:16 am): The headline, which originally referred to EasyMobility as a “motorcycle-on-demand startup” looking to give other entrants a run for their money has been reviewed to accurately depict the model that it operates on. All similar references within the article have been edited too.

You may have noticed some motorcycles with distinctive blue branding, operating along major routes in Lagos State, Nigeria.

Even though their riders wear ‘EasyMobility’ branded apparel, they seem to have similar operations with motorcycle-on-demand services like Gokada and MAX, judging by the looks of the bikes.

There is however something unusual about them. Unlike with Gokada and MAX, where users go online to request rides via an app and get estimated fares, EasyMobility does not have that functionality implemented on its service.

As a matter of fact, the company’s only visible online presence is a website (as seen on rider’s uniform in the picture below) that is still undergoing construction.

One comfort that comes with e-hailing is the ability to estimate fares, even before the ride commences. But that doesn’t seem to be so with EasyMobility. How then are the riders able to estimate the fare for their passengers?

On two occasions where Techpoint used the service, it was a case of the riders demanding arbitrary fares. One of them expressly stated that EasyMobility does not have an app that either allows passengers request a ride or riders accurately estimate trip fares.

“We charge the passenger based on what we think is the normal gauge,” he explained.

Another rider, who charged ₦600 for a ride from Ikeja under bridge to Anthony, even bragged about charging ₦1000 on the same route the day before.

Techpoint sought EasyMobility’s operational office, which happens to be situated in the Anthony environs of Lagos.

Interestingly, a senior staff of the company who goes by the name Femi asserts that fare estimating apps have never really made any difference in the market.

According to EasyMobility CEO, Adekunle Omololu, EasyMobility is a leasing company whose primary customers are the riders and not the end users, as is the case with Gokada and MAX.

“Our model allows our riders to use the bikes for whatever need they deem fit, whether they want to use it for personal use or commercial purposes. All we require of them is that they pay their daily leasing fee,” the young CEO explains.

For most Internet companies, profitability and survival hinges on adoption. And given the country’s problem of generally low Internet penetration, most are barely hanging on to survive. Is this then a case of finding favourable grounds to compete or a cold attempt to eliminate or avoid competition?

The first rider had earlier hinted that they are mandated to return ₦3000 on a daily basis to the company. Whatever excess was made for the day is theirs to keep.

In hindsight, ₦3000 does indeed appear to be a paltry sum to remit daily; especially for riders who use the bike for commercial purposes (aka okada).

It perhaps validates Adekunle’s claims of how EasyMobility has grown a great deal in the space of one year and six months that they’ve been in operation, even without any online presence.

Save for questions around profitability, and others like meeting up with Lagos State road traffic laws, a proper review of the model shows that it has the potential to provide continuous revenue for the company.

But on the downside, riders — particularly those who use the bike for commercial purposes — can manipulate passengers, since they decide what prices should be. And without an app, there is no way to checkmate this obnoxious activity. Meaning that questions may arise around price standardisation.

Should the company continue to downplay the need for innovation while it goes about its business or is this just the right type of model for Lagos-based motorcycle-on-demand companies?

What are your thoughts about the company and their model?