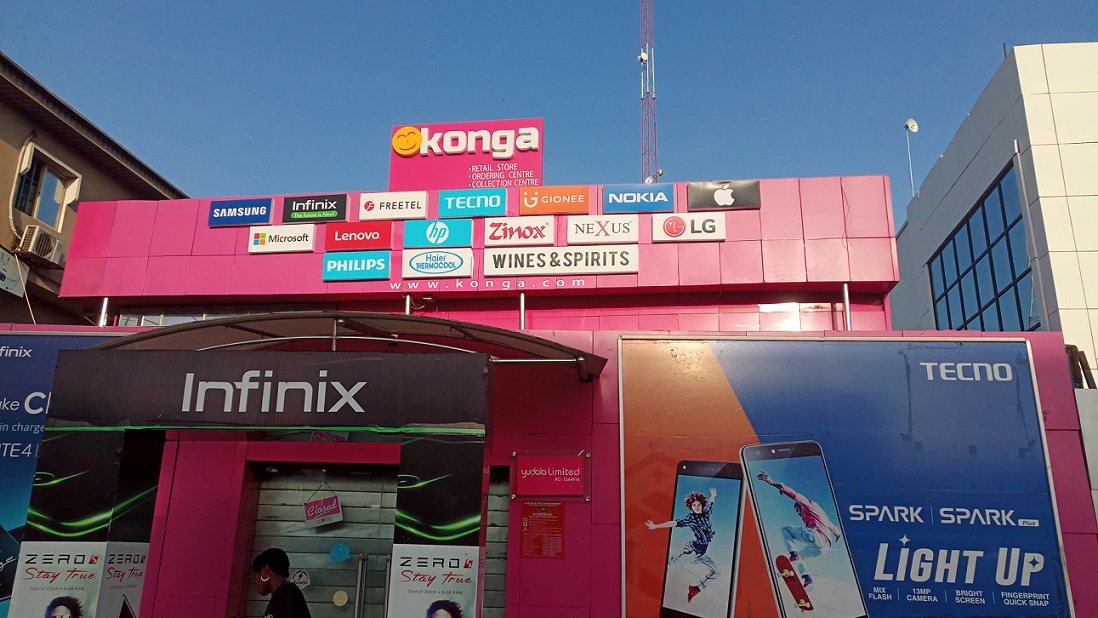 Prior to the Yudala-Konga marriage that followed the acquisition of the latter by Zinox Group, Yudala maintained the highest number of brick-and-mortar stores in the nation’s eCommerce industry.

These physical stores would definitely end up being of great advantage to the new Konga brand.

Zinox Group initially maintained that both companies would not be merged but as of May 1, both companies merged, with the Yudala brand getting totally absorbed into Konga.

Yudala offline stores now operate under the Konga brand name, and its online store is no longer available, with emails to the domain not getting delivered.

Playing in the eCommerce sector in Nigeria is no longer an online-only affair. The sector has witnessed its fair share of initiatives designed to help serve shoppers better, one of which is the introduction of brick-and-mortar stores which also serve as drop off and pick up centres.

During Black Friday In 2015, PayPorte held its own outdoor sales event — the first by any eCommerce company in Nigeria.

Another of such moves was the first drone delivery by Yudala in 2015. Not much has been heard of what appeared to be a PR stunt. It can be argued that Nigeria, even Lagos, is not ready for the delivery of goods by drone. In as much as shoppers want delivery of goods on time, unmanned aerial vehicles are not the answer for the Nigeria eCommerce space for now.

In years to come, brick-and-mortar stores will remain a part of the eCommerce industry. According to the Global Consumer Insights Survey 2018 (PDF), brick-and-mortar weekly shoppers grew by 4% between 2016 and 2018, an indication that eCommerce cannot phase-out physical stores.

Drinks.ng, the first eCommerce player in Nigeria to publicly condemn the Payment on Delivery (PoD) model, had to go the route of physical stores as pick-up centres in response to the market’s demand. Shoppers can also make payment for their items at these centres.

Probably, the most popular chain store in Nigeria, Shoprite maintains a presence in some major cities in the country while also maintaining an online presence, which is mainly to drive shoppers to its brick-and-mortar stores.

Below are some reasons why physical stores would continue to be part of the eCommerce industry.

The touch and feel experience

In spite of convenience being one of the benefits of eCommerce platforms, the need for a ‘feel and touch’ experience cannot be ruled out.

While there’s the idea that the Nigerian market needs more eCommerce stores, the fact remains that shoppers still want to get the ‘touch and feel’ effect before making payment for goods.

For brick-and-mortar stores, shoppers most times have the opportunity to try out a product before making a purchase. There’s also the part of instant gratification, rather than waiting hours or even days.

A friend recently got a television set from Jumia Nigeria, he opted for PoD. When his order was delivered, he tested the television to his satisfaction before parting with his money.

Just as with my friend above, there’s the desire to inspect items like fresh food, furniture and even appliances before making a purchase.

Back in 2013, I ordered for a laptop on Jumia Nigeria. The laptop was supposed to come with a Microsoft Office suite pack but the laptop arrived without the suite. It took me days after the initial delivery before I could get the suite.

This is a typical scenario why shoppers prefer the offline channel as one won’t have to wait for days before getting the full value of a purchase.

It might sound out of place but shoppers visit physical stores, just for the opportunity to take selfies with friends and families, and post them online for their social media audience as well as admirers.

According to the Global Consumer Insights Survey 2018 survey, people in the United States are less likely to shop for groceries online, than those in China or the Middle East where the online grocery market is riding on the growth of the Internet and increasing smartphone usage.

And of the total respondents from South Africa, only 15% are likely to buy grocery online.

The result from a Twitter poll shows that 49% would buy groceries online in Nigeria while 51% would not.

#TPpoll: Would you buy groceries online in Nigeria?

The same question was put up on Instagram, 52.6% said yes and 47.3% said they won’t buy groceries online.

One of the voters on Instagram made a valid point. To him shopping for groceries online would be on the ground that the item can only be found in an eCommerce store.

A few months back when shopping for a smartphone, I checked out a couple of online stores comparing prices and specifications before heading out to a nearby Slot store to make a purchase.

Shoppers are online but most of the shopping activities still happen offline. According to PwC in the consumer insight report, online shopping currently accounts for only one-tenth of global retails sales.

Big global brands in the eCommerce sector are already finding a way around merging the online and offline channels. In 2017, Amazon acquired Whole Foods, a grocery chain with over 460 stores. In the same year, Alibaba also acquired a chain store that has 29 stores and 17 shopping malls.

Although the cost of real estate for brick-and-mortar stores is a major hindrance, maintaining physical stores for eCommerce players reduces the costs associated with shipping, returns among other logistics.

There’s also an added advantage to the ‘order online and pick up in store’ model as it would increase the popularity of the physical stores which can translate to more sales inside the store.

According to The International Council of Shopping Centers (ICSC), 69% of shoppers that use the click and collect option while shopping online end up buying additional items when collecting their purchases at physical stores. And 36% of those shoppers also buy from an adjacent store during the pickup.

The mindset is that the growth of online shopping will reduce the shopping activities taking place in brick-and-mortar stores. But the fact remains that shoppers still want to see, feel, and try on products before making a purchase.

And it’s not a case of online versus offline, but the marriage of online and offline channels. It probably won’t be out of place to assume that eCommerce is a plus to physical stores and not the other way round as we assumed it to be.