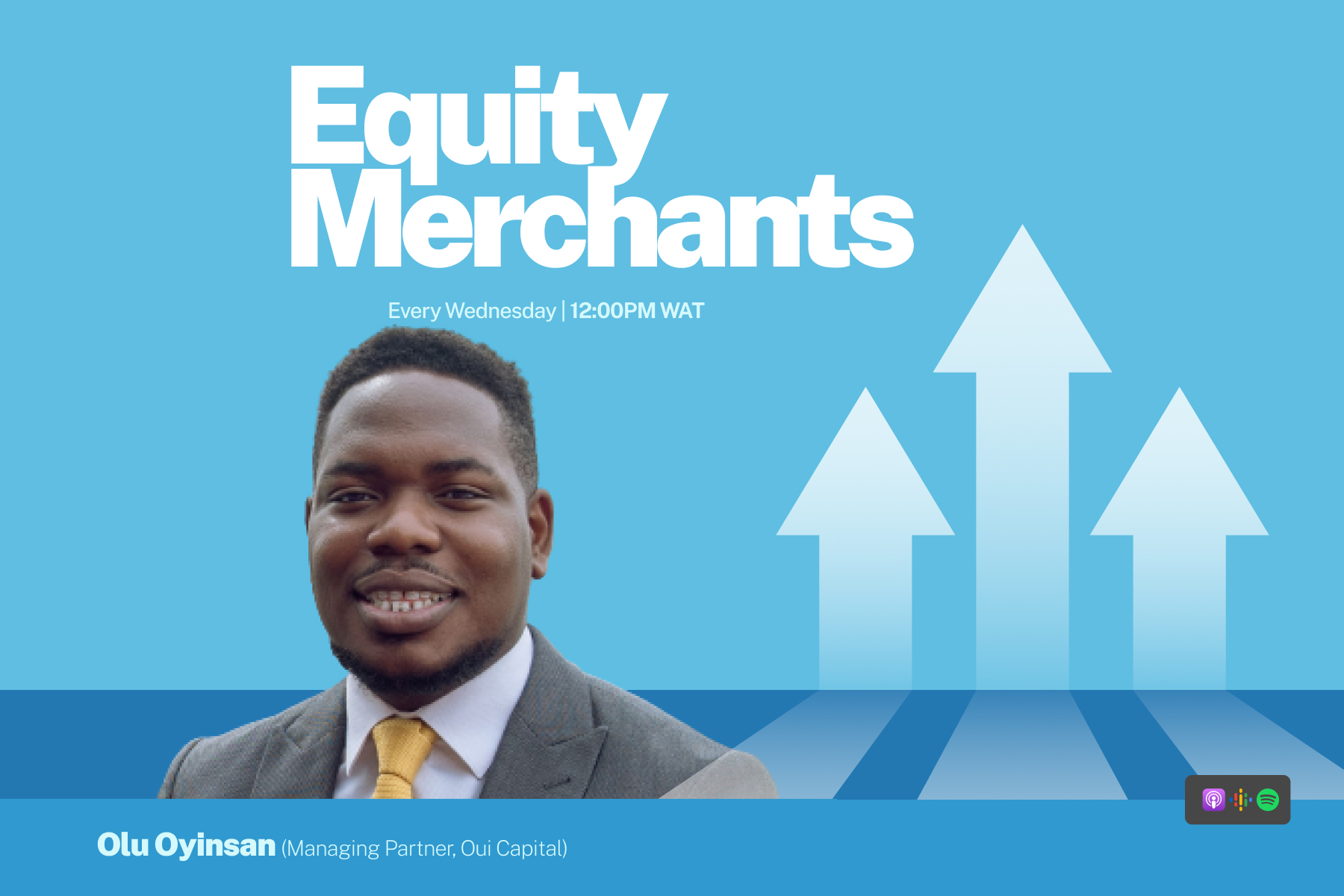 In 2018, Olu Oyinsan left his job as the Vice President, Investments at Ingressive Capital, one of Nigeria's earliest venture capital firms. Before that, he had worked at Silicon Valley Bank as a Relationship Advisor. This time, his new venture was at Oui Capital, a venture capital firm that would back early-stage entrepreneurs in Africa.

PS: Oui Capital derives its name from the French word for yes, and the firm hopes to be one of the first yeses for Africa’s brightest entrepreneurs.

In 2019, Oui Capital launched officially, with Francesco Andreoli joining Oyinsan to lead the firm. In August 2022, the firm announced the launch of its second fund, the Oui Capital Mentor’s Fund. The $30 million Fund will help the firm build upon its successes since its launch — it has invested in 18 startups across five countries.

On today’s episode of Equity Merchants, Oyinsan joins us to share his thoughts on the business of venture capital. In addition to his job supporting founders, Oyinsan has a few passions and interests.

In his younger days, he wanted to become a footballer, even getting a partial scholarship to study and play in the United Kingdom. Unsurprisingly, his father was against the idea. He also plays the bass guitar and the drums.

For Oyinsan, starting a VC firm in Africa is not for the faint of heart and is mentally draining, but he assured that doing it is possible.

“Hindsight, they say, is twenty-twenty. Being a venture capital investor is not for the faint-hearted, especially if you’re not leaving your role at Sequoia Capital or a16z.”

Andreesen Horowitz (a16z) and Sequoia Capital are two of the world's largest and most well-known venture capital firms. Leaving to start your firm, especially with substantial experience, could make raising capital from limited partners (LPs) easier.

How does venture capital work?

In 2008, Garrett Camp and Travis Kalanick were attending an event in Paris, and they could not get a cab. That experience had them questioning why they could not order a cab from their phones. Over the next few months, they worked on the idea of a mobile app that anyone could use to call a cab; the result was Uber, one of the most notable startups globally.

While the idea of booking a ride from your phone is no longer alien, it was unheard of at the time. The usual institutions that provided capital for entrepreneurs would have baulked at the idea of financing a business with an unproven model. Still, many venture capitalists took a bet on the company, earning considerable rewards in the process.

Oyinsan says this is the core of venture capital — betting on founders building innovative solutions.

“Venture capital is that asset class, that financing vehicle that backs entrepreneurs or founders that are trying to build something where there are so many unknown quantities. And this is why venture capital is one of the asset classes where people must be comfortable with risk. What you do as a venture capitalist is that you are that provider of finance to the lady or the guy who's building something that is bold, that the objectives or the outcomes are not really known.”

From time to time, you may come across a tweet by a founder laying into VCs. On other occasions, it could be the VCs themselves laying into founders. However, Oyinsan believes that most founders and VCs understand each party's role in the success of startups.

“Each person understands what they bring to the table, and that’s why venture capital has been around for maybe close to a hundred years now. People realise that it takes two to tango. To build a successful business, you need someone to provide the money and someone else who does the work.”

Pointing out that as soon as founders and VCs realise that they’re on the same side, it becomes easier to achieve a balance, he says, “a VC’s incentive is that you succeed.”

“For every equation, when both of you are on a team, you need both to win. What you see a lot of the time is one party can be more focused on what they want and forget what makes it worthwhile for the other party, and this is where conflict comes in.”

How to stand out to VCs

As venture-backed companies experience huge growth, it is normal that more founders decide to go after venture capital investments. However, there are only so many startups that VCs can invest in. Most VCs I speak to say they see over 1,000 decks annually; however, they invest in less than three per cent of them.

So how do you stand out to investors and get some money for your business? For Oyinsan, raising money from investors depends on how well a founder understands the VCs’ incentives. Therefore, the first step in successful fundraising is identifying what a VC wants from their investments.

“If I go a whole year without finding a brilliant founder to back then, I might have no job, so I’m constantly looking for founders who are building brilliant, bold ideas. The question is, ‘Are you that founder?’ and this is where a lot of people stumble.

“The first thing I would say is to think about the person’s incentive. Not all VCs have the same incentives. Some are impact funds, some are pseudo-philanthropies, and some are family offices that are just looking for strategic investments. Some are corporate VCs who are looking for companies they can acquire down the line, so find out what their incentives are.”

“VCs are always looking for the next big opportunity, but like everyone else, we only have 24 hours a day, so you help us by bringing your company up to our line of sight.”

While he acknowledges that innovative pitches are great for getting an investor’s attention, he is quick to point out that investors will be quick to interrogate other aspects of the business.

“Anybody can make a pitch deck. After the first conversation, the pitch deck almost takes a back seat and then it's about all the other things that have to do with the business. The important thing is that the information they need to be attracted enough to dig deeper is what your pitch deck needs to do.”

A term sheet is a legal document that lays out conditions for a VC to invest. It is not legally binding and only indicates what terms guide the investment. Before starting the fundraising journey, Oyinsan advises that founders familiarise themselves with the fundamentals of venture capital.

Some term sheet fundamentals that founders need to be aware of fall under economics and control. Economics, in this case, deals with how money and resources will be shared, while control refers to who can or cannot make certain decisions and under what conditions these decisions can be made.

“The first thing you need to realise is that the moment you take outside money, you’ll have to give up one of these or both, and you need to be comfortable with that as a founder. If not, build the company with your money, and you can keep all that.”

Although investors need to ensure that their investments are protected, Oyinsan believes that a good investor does not try to run the company.

“There’s a reason a founder is a founder. If the investor loves that business so much, he might as well do it himself. It’s very important to always delineate the role of a founder and investor but also create levers that make everybody’s incentives aligned.”

While it is expected that founders understand how venture capital works, Oyinsan advises that founders involve lawyers before signing legally binding documents.