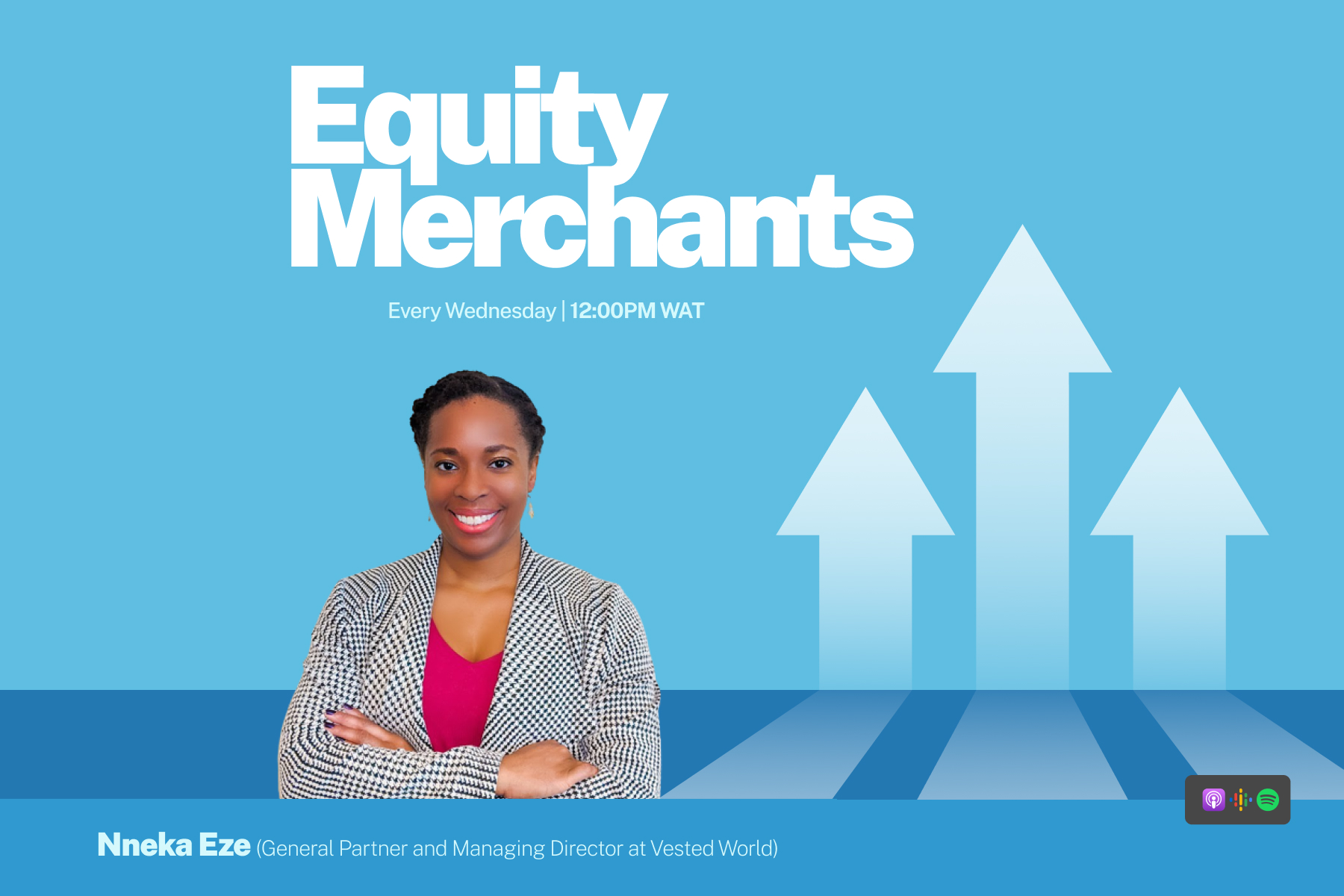 “Startups are really in charge of who comes onto their cap table, and I think that's a good thing, especially given how much new capital is coming into the ecosystem,” Nneka Eze, General Partner and Managing Director at VestedWorld, told me over a call.

African startups raised approximately $5 billion in 2021 and look set to match and potentially surpass last year’s figures after raising $2.25 billion in Q1 2022. But the numbers don't tell the whole story.

While more VCs are pouring into the continent, venture capital remains a game of numbers, and in the search for winners, VCs reject more companies than they invest in. On the other hand, startups have to ensure that they pick the right VCs to join them on their journey.

Eze advocates that a founder picks investors with the experience or network that can help their startup achieve its goals and the financial muscles to back it in more than one investment round.

“I think it's about what sectors the investor has invested in or their experience in the sector that the startup is in. What's this investor's network — with government, private companies, or potential acquirers — on the continent?”

“Particularly for the high-growth sectors, there's a question about whether or not companies can raise, not just this round, but the next round. So can this investor actually go with you on the journey? Do they know other investors that can come in and support you on that journey?”

Although more money is being invested in African startups, most of these funds come from foreign investors without African experience. Eze cautions that startups — especially in the early stages — need investors who understand doing business in Africa and can help their portfolio companies with their experience.

“It’s important to find Africa-based and focused investors. I've seen a number of rounds recently where it's primarily international investors, especially at a seed or pre-seed round. I think it's a question about whether or not that opportunity is going to be able to attract the later rounds of capital and really execute without partners who know the market very well.”

From management consulting to venture capital

Before joining VestedWorld, Eze spent more than a decade in management and strategy consulting, including in her last role as a Partner at Dalberg. Her time in these roles helped her form a thesis that now guides her VC work in VC. She also started angel investing with Reach, Tomato Jos, Goodloans, and Grassland Africa, among others.

Switching to venture capital was primarily about the level of impact she could have.

“The real reason I moved into venture is that it felt so impactful in terms of being able to invest your money, time, influence, expertise, and your networks in companies trying to grow and really change Africa in many ways.”

Management consulting and venture capital are somewhat similar; they help businesses grow, but venture capital also provides capital. Two things stood out for Eze when she joined VestedWorld: there were significantly more men, and the interests of founders and investors were typically aligned.

“The other thing is just this alignment of interest — part of what attracted me to investing — where you want the companies that you're invested in and the founders to do good work, to build their teams, to scale their companies and, of course, return the invested capital.”

Why fintechs raise the most money

Like their global counterparts, African fintech startups continue to receive the bulk of investors’ funds, and Eze believes this shows the state of financial services on the continent.

“I think fintech is so exciting because there are so many gaps to fix in financial services across the continent. There are still many countries across the continent that do not have switches as we have in Nigeria with NIBSS, where you can send money from one bank to another, and it will be settled nearly immediately. So you can imagine how long it will take to settle and clear if you're trying to do a cross-border transaction or send money from one part of a country to another.”

She also thinks the ease of conducting due diligence is another factor that helps fintechs get funding.

“If you're looking at investing in a high-growth company, let's say in healthcare, it is much more tricky to establish how well they're performing by only looking at the numbers. With fintech, and maybe this is being too harsh, it is easier to conduct diligence at the surface level. You see huge growth month over month in the revenue run rate, in the client numbers, and in the loans disbursed. And that can obviously be very exciting and perhaps easier to value.”

However, she points out that simply focusing on fintech alone means investors miss out on driving growth in other equally important sectors.

“I think only investing in fintech in Africa does miss out on the fact that fintech alone is a really small pool of what's really possible with financial services on the continent. Fintech is, of course, still very exciting but potentially not as exciting for me as other sectors, and I think there are linkages to financial services in every sector.

“So if you look at agriculture, logistics, consumer, and health, there are so many financial services that are required, including payments, but also in terms of what we're now calling embedded finance. So how do you actually finance the operators and players driving economies? I think there's so much to do there and that's what I'm very excited about that. And so if you only do fintech but don't get to know these other sectors that are driving the economy, I think we end up missing.”

When are startups ready for investments?

With VCs increasingly willing to invest in African startups, more people are beginning to pursue VC dollars in the hopes of getting funding for their businesses. Eze, however, cautions that not all businesses are suitable for venture capital.

“More money is coming into the sector, but I would say most startups are never going to get VC investment.”

For startups looking to raise capital from investors, she advises that they first get clarity on their vision and be certain they want the kind of scrutiny and growth that comes with receiving VC funding.

“Startups that are VC investible have to start having a conversation about their vision. Are they ready for that rocket ship growth trajectory that is expected over the five to ten-year holding period that a venture capital fund is looking for

“Are they ready to have external board members? Oftentimes when you're very early stage, you may have some advisors that you talk to but having a board that you're reporting to that is looking out for the shareholders’ interests is a big shift to that next level of professionalisation and growth.”

Founders should be able to share their story with investors, and where they can’t, she advises that someone be hired to help them do so.

“Of course, are they ready to go and tell the story? Because fortunately or unfortunately, these types of high-growth companies often require multiple funding rounds. So it's not just that you go out and raise venture capital, and you can sit back for the next five years and just grow the business.

“To meet these types of growth objectives and specifically to get closer to EBITDA positive if you're not already EBITDA positive, you're going to have to go out and raise funding. That requires either someone on the founding team or somebody brought in to talk to investors and tell the company's story and why the product is really the one to back.”

Venture capital firms usually conduct due diligence before investing in startups, and Eze shared some of the things Vested World looks out for.

“We really want to know where a company is now but also where it's heading. Where it is now is all about the team, the founder, and the founding team. We also look at how gender and geographically diverse the team is.

“What type of Africa experience and specific experience of the problem they’re trying to solve do they have? We always want to understand why the problem is interesting. Not just the fact that it exists, but also the market size and how well-positioned the company will be to address that.”

Eze discloses that investors will also look at how the team works, its finances, and how the company plans to achieve its growth plans.

She believes startups that understand their customers and have the right team will succeed.

Nneka Eze’s predictions and hope for the African ecosystem

As the ecosystem grows, Eze hopes more women will receive funding from investors. She would also like to see more countries outside the Big Four — Nigeria, South Africa, Kenya, and Egypt — receive more attention, with more Africans investing in the continent’s startups.

“I hope we start seeing investment outside Nairobi, Lagos, Cairo, Johannesburg, and Cape Town. There are other tech ecosystems and startup ecosystems outside of the primary cities.

“My hope is that more Africans invest, whether that's high-net-worth individuals or young professionals. I hope they can generate wealth for themselves and invest in other companies and their communities,” Eze concluded.