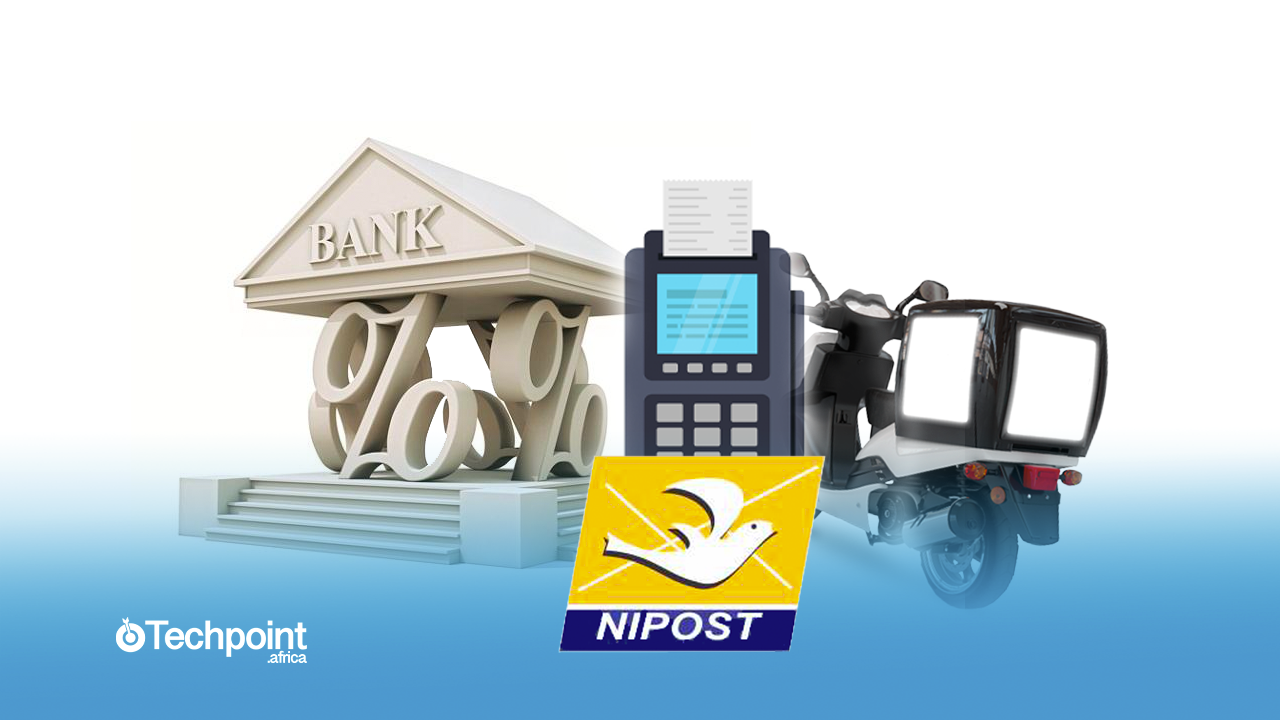 In the fintech space, phrases like “financial inclusion” and “banking the unbanked” have become so prevalent that they’ve almost certainly become buzzwords. Sometimes, it appears that a fintech startup claiming to be the latest saviour is born every second.

This is hardly surprising considering the proliferation of fintech startups in Nigeria’s tech ecosystem and the largely unsolved problem of the unbanked. According to the Enhancing Financial Innovation Access’ (EFInA), Access to Financial Services in Nigeria 2020 Survey (a2f) (PDF), the country’s financial exclusion rate is 35.9% — one of the highest in Africa.

That leaves almost 54% unbanked. Considering the Central Bank of Nigeria’s (CBN) plan to increase that number to 94% by 2024, there’s still quite a bit to be done. And the Nigerian Postal Service (NIPOST) has recently thrown its hat in this ring.

In January 2022, NIPOST unveiled its new agency banking platform at a ceremony in Nigeria’s capital, Abuja. The platform comes with a free debit card that works offline and online and is available at all NIPOST outlets in Nigeria’s 774 local governments.

According to Isa Pantami, Minister of Communications and Digital Economy, the agency banking platform would follow the Universal Postal Union’s (UPU) standards on financial inclusion. He also said that this is part of the government’s plan to digitise the postal services and improve financial inclusion in the country.

How would this work?

By UPU standards, NIPOST’s agency banking platform should provide essential services like savings, payments, money transfers, insurance, and credit. However, it appears the platform would work much like a multi-teller PoS-based service, so the exact mechanics of how NIPOST hopes to serve its customers are a bit sketchy.

Techpoint Africa sent a mail to the Postmaster General’s office but received no reply and a visit to the NIPOST headquarters in Ile-Ife, Osun State, revealed that not much is known about the platform yet other than its March expected launch date.

However, NIPOST is licensed by the CBN as a super agent and, by CBN guidelines, cannot provide insurance or credit facilities.

According to Pantami, the free debit card would use biometric authentication.

A biometric debit card uses the owner’s fingerprints to authenticate transactions, ensuring additional security and ease of use by the uneducated, thus making it suitable for financial inclusion, especially in rural areas.

This also means the card can be used offline. For example, Paycode says anyone with access to its API can verify users biometrically without connecting to the Internet. ExtoLabs, a California-based software company with plans to launch in Africa, uses a Bluetooth connection.

Interestingly, NIPOST did not mention a partnership with any fintech company to deliver this card. However, pictures of the ceremony in Abuja reveal a name — GingrPay — etched on the demo cards.

A Corporate Affairs Commission (CAC) search uncovered a company named GingrPay Nigeria Limited incorporated on May 18, 2021. A Google search led to a third party website with more info like directors, shareholders, persons with significant control, and companies where GingrPay company officers show up as directors or shareholders.

The website cites GingrPay’s activity description as “To facilitate electronic circulation of money as well as the exchange of value between individuals and organisations on a timely and consistent basis using technological softwares.”

A search on the CBN website does not turn up any licence registered to the company name.

Globally, postal services are no strangers to providing financial services. In Brazil, Correios, the state-owned postal company, operates the Banco Postal in partnership with Banco do Brasil, providing banking services to the unbanked.

In India, the India Post Payments Bank is a subsidiary of the India Post and has been in operation since September 2018, serving over four crore — 40 million — customers. Initially, because the India Post appeared to be haemorrhaging money, there was some resistance to the initiative.

On the continent, in Ghana, the Ghana Post provides various financial services like agency banking in partnership with banks, insurance, and GhPostPay, which enables users to make online transactions. Remittance services are currently suspended.

In the Benin Republic, government-owned Le poste du Bénin enables customers to have both savings and current accounts, and provides credit facilities, insurance, and remittance.

Namibia’s NamPost gives customers access to a funeral cover and a savings bank that provides investment products, and save-as-you-earn accounts, among other things.

Logically, it follows that postal institutions are essential to fostering financial inclusion.

NIPOST has made several attempts in this arena.

In 2017, it signed a partnership agreement with Nigerian fintech startup, Paga, to improve financial inclusion.

On a call with Techpoint Africa, Arike Okunowo, General Manager, Sales and Distribution, explained that the partnership broke down after a few months because there were some issues surrounding the staffing needed to successfully run the business.

The partnership saw Paga provide the platform, which NIPOST’s workers manned. But Okunowo explained that the staff already had primary assignments and this created conflict.

As she told Techpoint Africa, “If you want to run financial services, you need some level of focus so that if the customer comes in, you are always available to attend to them.”

She also said that NIPOST was very keen on having its staff man the platform with no third-party interference. However, she also said that they would be open to a possible partnership with the postal company in the future.

On its financial services page, the postal service company says it provides domestic transfers, international remittance, agency banking – this appears to have been on the page since April 23, 2021 – and mobile money services.

NIPOST owns an International Money Transfer Operators (IMTO) licence and says it has partnered with companies like Western Union.

A visit to the NIPOST headquarters in Ile-Ife, Osun State, revealed that the agency no longer carries out any of these services and doesn’t seem to have done so for a while, an offshoot of Pantami’s decision in 2019, which saw the agency adopt a cashless policy. All cash transactions, including remittance, are to be done in a banking hall.

There are also plans to create a microfinance bank.

What industry players are saying

Okunowo believed NIPOST’s infrastructure makes it a good centrepoint as a shared resource.

“I’d say NIPOST should actually be a shared resource for all the providers because of its infrastructure, and because it’s such a  major part of the Nigerian state.”

While Edidiong Uwemakpan, Director, Brand and Corporate Communications, TeamApt, believed the decision is commendable, she worried about fraud.

“Where I begin to find challenges is that you were trying to eliminate cash. Now, part of agency banking is, of course, bill payments, and that makes sense. But then the cash in, cash out part of things, that’s where I don’t really see how they plan to do it.

“Because, are you going to be giving your NIPOST workers a float so that they can give people cash? And you were already trying to eliminate cash in the past because of fraud.”

There’s also the fact that NIPOST appears not to have partnered with well-known fintechs. And while Okunowo could not confirm if NIPOST had approached Paga, Uwemakpan said TeamApt did not receive any communication from the postal agency.

However, though Uwemakpan believed that the market is big enough to contain everyone, she  raises concerns regarding the number of outlets NIPOST has – 3,000 – and whether this would be enough to serve customers. She said NIPOST might need to expand its reach to compete.

One thing Okunowo and Uwemakpan agreed on is that this endeavour requires quite a lot of investment by NIPOST.

In January 2022, speaking at a media parley held in Abuja, Dr Ismail Adewusi, Postmaster General and CEO of NIPOST, said that NIPOST was to be unbundled once more, this time, in three places: NIPOST Properties and Development Company; NIPOST Transport and Logistics Company; and NIPOST Microfinance Bank Limited.

He also said the unbundling would be done before the end of January 2022. However, there has been no announcement to that effect.

The NIPOST Act is still in the process of being repealed, and the Nigerian Postal Service (Repeal and Reenactment) Act 2021, passed by the Senate and the House of Representatives in 2021, is currently awaiting assent by President Muhammadu Buhari.

When assented to, this means that NIPOST can be unbundled into whatever subsidiaries it sees fit and would hold regulatory powers, making the Postal Agency a Commission.

NIPOST has also partnered with several private companies on its path to full digitisation. In December 2021, it announced an agreement with Egyptian startup, eGATE to create an app that automates last-mile delivery. Customers will be able to track communication with drivers and monitor their delivery.

In 2018, NIPOST introduced its Address Verification System and Digital Address System. Both were done in collaboration with identity verification startup, Youverify, to improve mail delivery and resolve addressing issues, but the link to the website leads to a dummy page.

However, interestingly, there are plans to launch a digital postal code system that is expected to solve the same problem before the end of the first quarter of 2022.

On the surface level, NIPOST does seem to have a lot planned that should benefit the average citizen, but implementation and consistency appear to be lacking.

To pull off its latest scheme, it might require an overhaul of its entire processes – like its unbundling, for instance. But these are still early days, and there is much that can still happen.