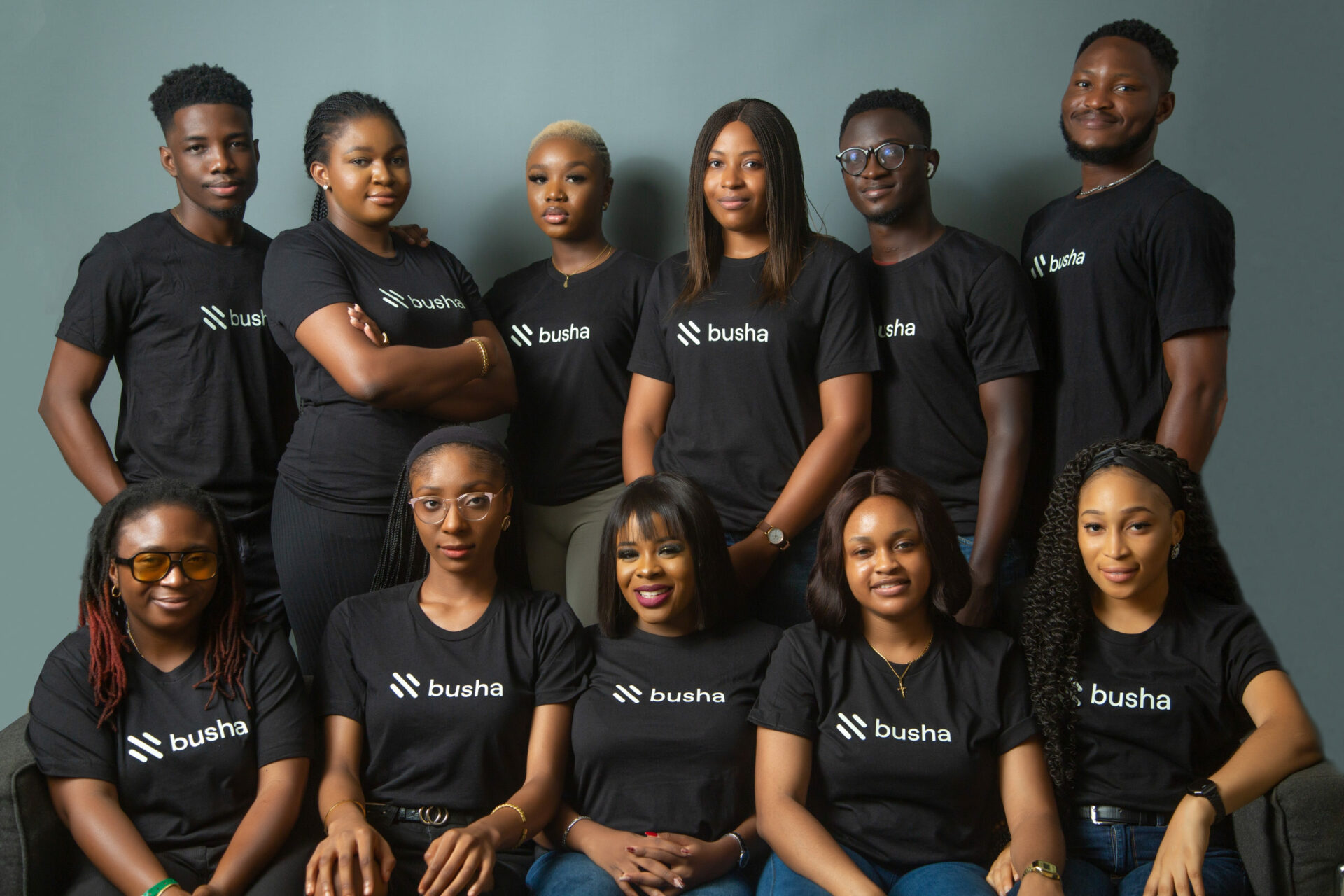 In my run-ins with crypto experts, exchange founders, and enthusiasts, there are usually tales of losses that lead to their love for cryptocurrencies.

These tales range from scams to losing access to their crypto wallets to investing a lot in crypto-assets that didn’t have any prospects of success.

Regardless of how tragic their beginnings with crypto are, they always seem to have an enduring love for these digital assets and eventually turn their losses into significant gains.

Moyo Sodipo, Co-Founder and CPO of crypto exchange, Busha, also has one such story to tell. His experience saw him team up with Micheal Adeyeri (CEO) to build Busha for people to learn about crypto without getting their fingers burnt.

Today, Busha announces a seed raise of $4.2 million led by Jump Capital with participation from Cadenza Ventures, Blockwall Capital, and CMT Digital, among others.

During a chat with Techpoint Africa, Sodipo’s excitement about the fundraise was all too apparent.

“All the hard work we’ve put in over the last few years is finally being recognised, but it’s just the beginning.”

But the journey, since Busha launched on February 19, 2019, to this fundraise has been anything but smooth. And Sodipo revealed a lot during our chat.

It started at Jumia

Sodipo and Adeyeri were part of Jumia Nigeria’s pioneer employees in 2012. Sodipo was an IT DevOps engineer, while Adeyeri was a software engineer. Experiencing first-hand what it takes to build a startup at Jumia, their time there helped them build a customer-centric platform.

“We’ve been in the eCommerce/digital economy since 2012, so we’ve been able to watch the ecosystem grow. And the experience we gained from our time at Jumia, which was the beginning, shaped us to be resilient.

“We wore many hats at Jumia, which is common with startups. For example, if you’re a gateman in a startup, it doesn’t mean you won’t double as a driver.”

Though Sodipo was an IT DevOps engineer, he worked closely with customer support and saw how vital customer relationship and experience was. He also worked with other teams, such as marketing and operations, which gave him an overall view of what makes up a startup.

“I worked closely with people in the marketing team, the supply chain side of things, and the operational side, so I understood the broad aspect of a business.

“I also worked closely with the co-founders, and it made me understand that when you’re building a business, you cannot be obsessed with only the technology part of things.”

According to Sodipo, Busha takes its customers very seriously, paying close attention to user feedback and providing round the clock “human customer support.”

Adeyeri and Sodipo also worked together at SureGroup, where they also gathered more experience in building startups.

Bull run, a common crypto lingo, is used when crypto asset prices surge and people get mind-boggling amounts of interest on their investments.

At this time, cryptocurrencies become very popular and more people try to get in on the action, thus fueling the bull run even more.

There have been a lot of interesting bull runs since the creation of Bitcoin in 2009.

Many other bull runs followed, but Sodipo got wind of Bitcoin during the fifth bull run that saw it go from $1,000 to $19,850. The cryptocurrency started getting the attention of governments and economists, and even more coins were created to compete with it.

A friend told Sodipo about Bitcoin in 2017, but he didn’t give it much thought until he realised Bitcoin had increased so much in value, and he could have made a lot of money if he’d listened to his friend.

But despite his interest and excitement, he experienced a series of losses.

At the time, there were a lot of initial coin offerings (ICOs) — the crypto version of initial public offerings (IPOs) — going on. An ICO is a type of fundraising done by startups that offer crypto-related services. The startup puts its tokens up for sale, and people buy them hoping that the business takes off, the token increases in value, and they get good returns on their investment.

However, unlike IPOs, ICOs are not regulated, so some turn out to be scams, some of which Sodipo fell victim to.

“As with most new people in crypto, I got my fair share of, let’s say, breakfast,” he chuckled, “there are a lot of tokens that I bought back then that are worth zero right now.”

Sodipo wasn’t the only one losing money to crypto; Adeyeri was also getting served his fair share of ‘breakfast’. Interestingly, amidst the crypto heartbreaks, there was a business idea.

“We had looked into crypto in general and gotten our hands beaten. We thought if Nigerians want to get into this thing and keep making mistakes and losing money, Nigeria will be left out of this whole crypto thing.

Another thing that made crypto popular back then was MMM. So there was this notion that Bitcoin and MMM were the same, and that was another narrative that we needed to correct.”

They attempted to correct this belief by creating a platform that made getting into cryptocurrency simple and scam free.

“I call cryptocurrency the future of money. People want to be able to tap into this future because it’s something that is borderless, fast, seamless and easy to use as long as you give people the right platform.”

Busha started as a way of clearing the misconceptions about cryptocurrencies. According to Sodipo, some people thought they needed to buy an entire Bitcoin, currently valued at $59,000, to own cryptocurrency.

They got users to understand that they could buy in small bits, as low as $10. They launched Busha, and the simple-to-use platform grew organically over the years.

Under the leadership of Sodipo and Adeyeri, Busha has done well without any external funding. The platform currently has over 200,000 registered users and has executed 1.5 million trades.

However, bootstrapping a company to this point had its challenges.

“In the early days, when we had not gotten enough users, we were just winging it. The business was pretty much living from hand to mouth.”

But no matter how hard things got, the co-founders ensured salaries were paid.

To increase their user base, they created a learning platform that taught people all they needed to know about cryptocurrencies. And the business continued to grow, majorly through referrals.

While Sodipo admits crypto regulation in the country is a touchy topic, he says the directive was a major hurdle, one which Busha has successfully innovated around.

Crypto startups responded to the CBN’s directive with P2P. By the end of Q1 2021, Nigerians had transacted $99.1 million worth of Bitcoins despite the directive. The country also reached an all-time trading volume of $1.5 billion on Paxful.

However, it seems the CBN is clamping down on P2P as Nigeria’s Bitcoin weekly trading volume dropped by 43%.

Affirming that Busha is pro-regulation, Sodipo said that “From inception, we’ve always been self-regulated. In as much as there is no actual licence, we’ve done KYC, made sure we are a compliant exchange when it comes to everything.

“So any day that regulators come knocking, we’re able to let them know ‘even though you didn’t tell us to do this, we’ve always been doing it.’”

With  $4.2 million at their disposal, Sodipo revealed that the plan is to remain the best platform for customer experience.

Speaking about expansion plans, he said, “We want to be the platform that connects Africa to the new digital economy.”

The future of Busha

When I asked Sodipo where he sees Busha in the next five years, he laughed lightly, and I could tell that he was excited about the thought of what Busha could become in half a decade.

“The next five years will be very interesting. Even though everyone seems to be clamouring for Bitcoin and crypto, we’re still at the very early stages of crypto.

“In the next five to ten years, I see Busha being your one-stop-shop for everything that has to do with crypto. Whether it’s buying and selling, getting in and out of NFTs, or plugging into DeFi, I see Busha being the place that you think of first when you want to do anything cryptocurrency-related.”

It appears Sodipo sees Busha replicating JP Morgan’s role in the banking industry. However, only time will tell.

Be like I go install my busha app back oo

Busha is the best, always evolving
@Jegz come on board

Wow ! Thank you for this post, it is really enlightening. Keep up the good work

congratulations on the success of the business and the funding round..would be nice to get some guidance from you with respect to developing an fin tech problem solving app …would appreciate if you would let me ask you some questions and get a good road map to make my journey easier…

What is the name of busha education portal..

Hi John, the name of Busha’s learning portal is Busha learn. The website is learn.busha.co