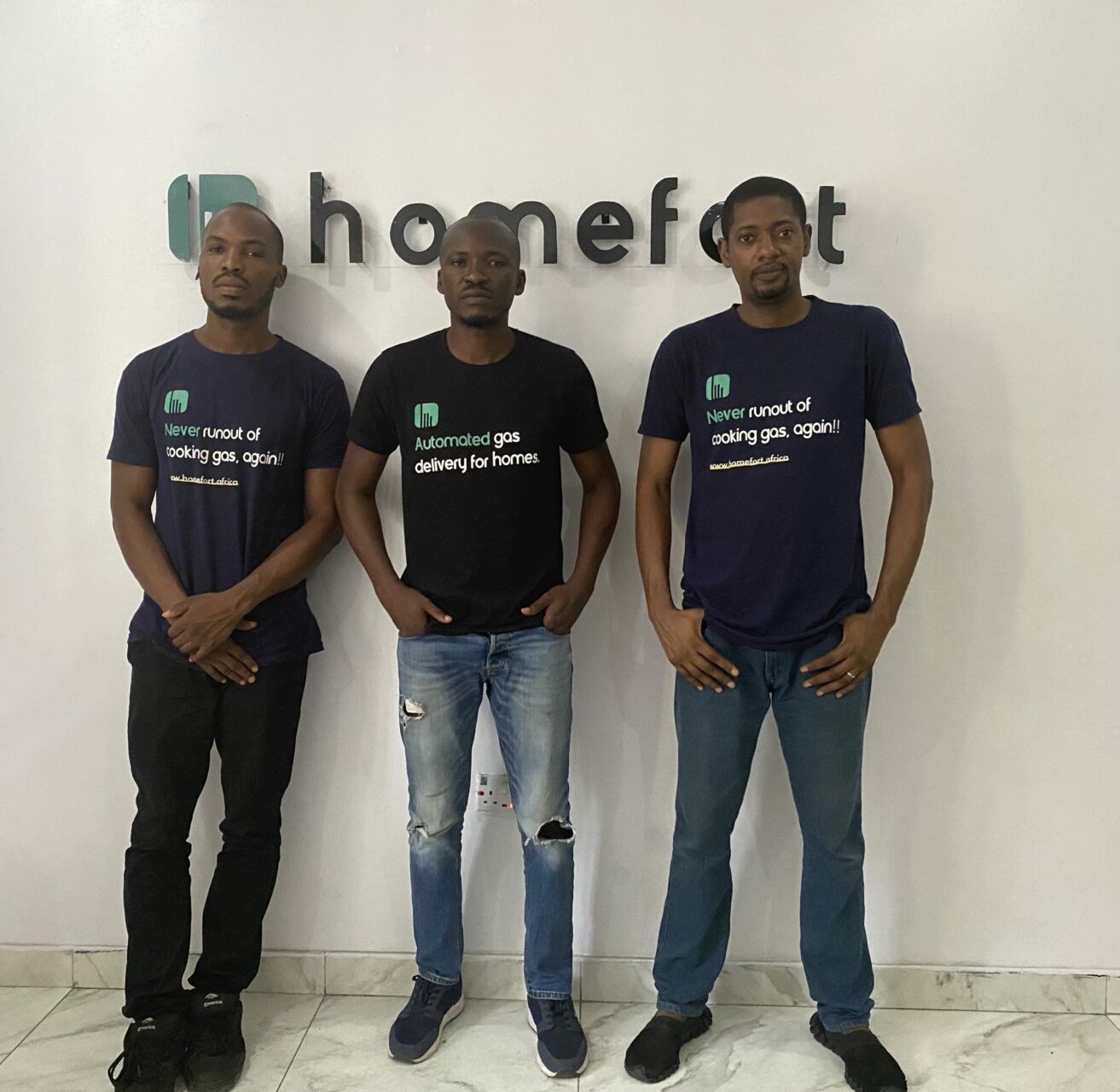 In 2007, Nigeria’s gas consumption was 70,000 metric tonnes. However, in 2020, the Nigerian cooking gas market experienced rapid growth, with consumption increasing by 1400% in the last 13 years.

Besides, in June 2021, per Vanguard, a local media platform, the Nigerian Federal Government announced plans to increase the use of liquefied petroleum gas (LPG) as a cooking fuel from 5% to 90% in the next ten years.

This is because the number of users has quadrupled, and the retail network has grown significantly, according to the federal government.

However, Opeyemi Owosho, Chief Executive Officer (CEO) of clean energy startup, Homefort, says, “this expansion has resulted in a poor consumer experience in which consumers are unable to monitor the amount of gas remaining in their cylinders.”

As a result, unexpected gas shortages are a common and recurring issue.

“LPG marketers are hesitant to invest in new cylinders because they are unable to track the location of their cylinders, resulting in asset loss,” Dapo Oyewumi, Chief Production Officer (CPO), adds.

So, these three men launched Homefort to address these issues.

Built by an experienced team

While there, he discovered some gaps in Nigeria’s cooking gas retail market.

“I invited Dapo, whom I met at the General Electric Garage back in 2013, to collaborate on the idea. Dapo persuaded Godwin, an embedded system engineer, to join the team,” Owosho declares.

He also has a degree in petroleum and gas engineering and has worked in gas safety operations.

Oyewunmi was a former prototype manager at General Electric Garage. He is a hardware product engineer with a wide range of skills.

Ogboye was the former CTO of GRICD, a startup that developed a smart cold chain box that actively regulates temperature-sensitive items during transportation and storage. He is an embedded systems engineer who also works as a full-stack developer.

“These smart metres act as an interface with Homefort’s user app. When a smart metre is connected to a cylinder, the app allows the user to monitor the gas level in real-time,” Owosho explains.

The company offers digital tools to enterprise customers to help them track the movement and location of their cylinders across the retail value chain.

For consumers, Homefort claims its smart metre transmits data about its consumers’ gas usage to Homefort, which allows them to monitor the gas levels in their customers’ cylinders remotely.

Homefort’s web app provides a bird’s-eye view of gas levels in all of its customers’ cylinders. As a result, when a customer runs out of gas, Homefort notifies them and schedules a delivery.

“We notify and schedule a cylinder swap for customers who are running low on gas. As a result, our customers never run out of gas,” Oyewumi says.

Moreover, barcode tags on Homefort cylinders allow them to track the age and health of the cylinders in real-time. They also receive notifications when cylinders reach their expiration or maintenance dates.

It also helps LPG marketing companies in tracking the location of their cylinders to reduce asset loss.

Setting the pace in Nigeria

When it comes to LPG companies in Nigeria, Homefort believes that their competitors are still in the development phase, which gives them an early advantage.

“Nupe Energy is Homefort’s main competitor. However, as of now, they are not yet operational. Their product’s hardware is complete, but they are still working on the software,” Owosho clarifies.

“There are competitors operating in East Africa, with two of them planning to expand into Nigeria, which I believe is a good thing because more competition leads to a faster consumer education curve,” Ogboye says.

Overall, Homefort believes that its competitive advantage stems from the team’s unique skill set and in-depth knowledge of the industry.

A model that works

The Homefort app allows users to access the company’s services. To gain access to Homefort, users must first install the Homefort app, available for both Android and iOS systems.

New users who do not have cylinders or whose cylinders are more than eight years old must purchase Homefort cylinders.

“Our gas is typically 5% less expensive than that of roadside convenience stores. We make a 30% profit on every 12kg of gas we supply to our customers,” Ogboye says.

Users can use the app to track gas quantity used, gas quantity remaining, consumption, and transaction history. This feature is available and accessible to paid subscribers.

Steady growth in a challenging economy

In June 2021, Homefort raised a pre-seed round of $100,000 to help the company recruit its first hundred users. Idris Bello invested in the round.

Also, the company received $70,000 from All-on, the Nigeria Content and Monitoring Board, and Fate Foundation.

Even though Homefort is barely 11 months old, the company has over 120 monthly active users. Also, in the last four months, its monthly user base has increased by 500%.

“We have a long and growing waitlist of about 1,050 users. And our growth strategy is very enterprising; by December 2022, we plan to grow our user base to 5,000 per month,” Owosho says.

According to Oyewunmi, every member of the team, which has grown from 3 to 12, is wholly committed to the product’s success.

Some components of Homefort’s smart metre are sourced from China and the depreciation of the naira against the US dollar has significantly impacted the company.

However, it has begun reverse-engineering some of the components they import from China to reduce their reliance on dollars for component procurement.

“We’ve begun reverse-engineering some of the components we import. By June 2022, we hope to have 70% of components sourced locally,” Ogboye says.

In the last two years, both funders and the media have increased their focus on energy tech startups that focus on clean and renewable energy.

“Nigeria’s tech ecosystem is rapidly expanding. There is, in my opinion, no better time to be a founder than right now. The ecosystem’s support from experienced founders is incredible,” concludes Owosho.

How can I get in touch with Opeyemi Owosho of Home front.

Its good to know that more and more people are switching to clean energy. The regulatory bodies are not doing enough to make sure that people don’t experience the harmful aspect of LNG. People need to be educated on use of gas and establishment of gas sales outlet. As the more and more people switch to thos business, lives are going to be terminated in their prime just because regulatory people have refused to do their job. Scores have died from gas depot explosion, more will die in the nearest future. These deaths are preventable if these guys would leave their offices to go inspect what the public is setting up as gas depot. Everything is not about money. Lets protect Nigerian lives please.