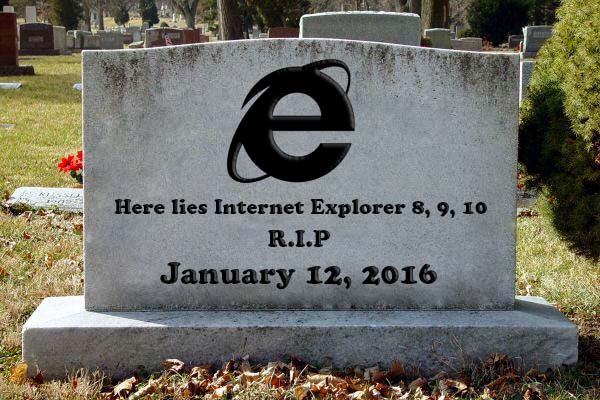 Microsoft announced in a blog post that it would retire the Internet Explorer (IE) on June 15, 2022.

Launched globally in August 1995, Internet Explorer became the most widely used web browser with about 95% market share between 2002 and 2003. And in 2015, it was already one of Africa’s most used web browsers.

Despite being the pioneering Internet browser, its security, speed, and reliability have been the butt of jokes for a few years now. Maybe that’s why Microsoft has decided to pull the plug on the browser’s life support.

Due to its longevity, no other software has had more security bugs than Internet Explorer before 2019. Its users are prone to get tricked by hackers into opening malicious websites from search queries or clicking on an email link.

When Microsoft reportedly confirmed a security flaw in January 2020, the company said it had no immediate plan to fix the defect used by hackers on IE until they released a new update in February of that year.

Despite the patches rolled out almost every month, its security and low network connectivity, which make it unreliable, do not inspire confidence.

That explains why some users started looking for alternatives.

“Internet Explorer was the go-to to download Chrome back in the day. I left it for Chrome because IE is very unreliable, and has bugs,” IheAnyi Okere, a Geographic Information System (GIS) analyst, told Techpoint Africa.

A Techpoint Africa Twitter poll revealed that most respondents share their sentiments and quit using IE due to unreliability.

One hundred and twenty respondents voted, and 48 people (40%) said they stopped using IE due to its unreliability; 36 people (40%) discontinued using it, citing bad network connectivity. Approximately 7 people (5.8%) stopped because of security bugs, and about 29 people (24.2%) said they never used it.

Consequently, it appears some Nigerians won’t miss the browser when Microsoft eventually puts it to rest.

Nonetheless, while Internet Explorer was going through its steady decline in market share, and Google Chrome dominated other browsers with 69% market share, Microsoft was building Microsoft Edge to replace IE.

What about Microsoft Edge?

With the Microsoft Edge browser launch in 2015, the software giant revealed plans to kill off Internet Explorer, though it would continue working until the end.

From August 17, 2021, Microsoft services like OneDrive and Outlook will no longer support IE.

Interestingly, Edge has an IE mode despite being touted as faster, more secure, modern, and reliable than its predecessor.

The IE mode is built in to access the legacy Internet Explorer-based websites and applications directly from the browser.

Microsoft also claims that Edge is its solution to the security issues faced on Internet Explorer over the years.

According to Microsoft, approximately 579 password attacks are attempted every second. And with reportedly the highest-rated protection against malware and phishing attacks, Microsoft Edge seems to be up to the task of protection.

According to browser statistics, Edge can identify 98% of phishing sites while Chrome and Firefox can successfully recognise 96%.

According to research, Edge can immediately block 89% of phishing sites, outperforming Chrome (79%) and Firefox (77%). This suggests that Edge is more secure than Chrome, Firefox, and Internet Explorer.

In the blog post released on Wednesday, May 19, 2021, Microsoft said, “the future of Internet Explorer on Windows 10 is in Microsoft Edge.”

But how much of this do users believe?

“I enjoy using Microsoft Edge, and it’s better than Chrome because it helps me retrieve my previous tabs whenever I log in again. Also, whenever I want to read, I can use the Immersive Reader. It’s like you’re reading on AnyBooks,” says Damilola*, a Microsoft Edge user who never used IE.

According to the Market Share Statistics for Internet Technologies, Chrome ranked first with 69.28% market share, while Microsoft Edge ranked second with 7.75% between November 2019 and April 2021.

On Tuesday, May 25, 2021, Microsoft announced two new features for version 91 of the Edge browser at its annual Build conference.

Startup boost allows Edge to start up almost immediately. The second feature — sleeping tabs — puts your tabs to sleep so that they don’t use up memory and the CPU cycle.

With the new Edge features and the retirement of Internet Explorer in June 2022, Microsoft might finally build a reliable brand known for speed and security and probably overtake Chrome some years down the road.

In Africa, according to Browser Usage Statistics, 68.37% use Chrome while 1.26% use IE and Edge, respectively. However, chrome is still the most vulnerable web browser in 2019, with 177 vulnerabilities detected.

That is, even with its vulnerabilities, people still chose Chrome over Edge.

So, what might prompt Africans to use Edge more? The reliability of a browser that hasn’t passed the test of time? How much work do you think Edge has to do to catch up with Chrome? We are also asking the same questions.

Featured Image by Firmbee from Pixabay