What the Dancing Pallbearers’ Meme is probably saying to millennials 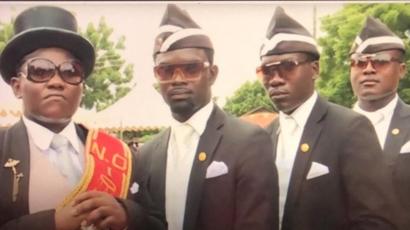 “Just because your homie died doesn’t mean they stopped partying,” someone quipped after seeing the Ghanaian pallbearers in action in a YouTube video uploaded in 2015.

Interestingly, the theatrics have gone on to thrill the global online community and probably gotten some wishing to have a similar funeral.

Apparently, this funeral choreography isn’t specific only to Ghana as people from other African nations and some parts of Brazil and India also have this as an option.

But then, it’s only for the aged because while this may be an interesting depiction of celebrating life, it doesn’t go well with sad exits — of young people or unfortunate deaths.

While this may have attracted reactions ranging from intrigue to consternation, there is something else the Internet is yet to get over — a meme setup.

Call it a perfect match made somewhere in the galaxy, the acts of these Ghanaian pallbearers were combined with the Astronomia dance beat by Vicetone & Tony Igy to become a meme that hasn’t stopped trending since February.

Although the creator of this music-video pairing hasn’t been successfully traced, it was first seen on a TikTok account in February and has since assumed different versions—including game and medieval versions.

The meme is usually worked into a video of something terrible waiting to happen due to a precarious action. The somewhat ominous sound it opens with gives the impression that someone is about to make a life-threatening mistake.

And after the first video, many more variants have been released.
These should keep you in the loop:

Just alerted to an INCREDIBLE new meme format that rivals we got him pic.twitter.com/yLz2onyggn

Wouldst thou preferest a solemn procession or shall we dance a merry jig at the event of your demise? Aye, we have gots thou covered. https://t.co/wkRbZnZo1R

Even in video games now. We all gonna die 😂😂😂#pallbearers #funeraldance pic.twitter.com/SmBdH0OdQH

Can you recall the image of Chadwick Boseman—King T’Challa in Avengers: Infinity War—that became a viral meme around February 2018?
If you can’t, here it is:

As expected, social media turned the image into a meme used to tell people what isn’t acceptable. And it was also used in different scenarios to correct people.


It is quite relatable.

But if defiance should be punished after a warning, maybe the dancing pallbearers will get the job done.

However, against the stereotypes associated with funerals, the pallbearers appear to be having a field day.

And this, to an extent, ruins the mood that comes with an event that doesn’t end well.

This in a way echoes how nerve-racking decision making can be, especially when it seems the rest of the world thinks you’re taking a huge risk. But then, you’re aware that it will always have a dramatic end — even if it is not a very good one.
The dancing pallbearers are probably whispering to you, “Embrace it fully. After all, you’d be exiting with a party.”