Unboxing the Nokia 6.2. Does it really keep getting better? 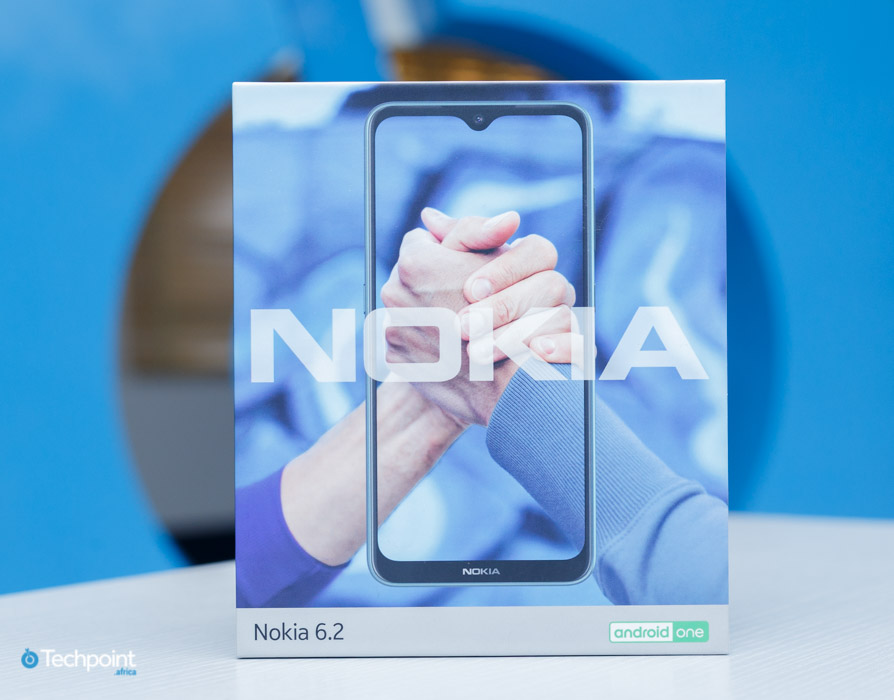 The Nokia 6.2 is the recently released successor to the Nokia 6.1 Plus and was recently introduced into the Nigerian market in October 2019.

As a fan of Nokia smartphones — I’ve been using the Nokia 6.1 for a while —  I was very excited to check out the upgrade.

The phone comes in a very simple and compact box.

This phone, like the Nokia 7.2, has three cameras and a flash as its main camera. With three different optical sizes for each camera, the main lenses work together to provide the user with the options of a wide angle or improve the depth of a given photograph.

The triple camera set-up is nestled within a circle behind the camera. When I first saw it, I thought this seems to increase the imagined value of the phone in my estimation.

Whether or not this set-up has any measurable impact on the quality of one’s visual content is another issue entirely.

One thing I have noticed with Nokia smartphones, or at least the smartphones in the Nokia 6 family, is that the hardware features of the phone are thoughtfully placed with daily use and handling in mind.

For instance, the 3.5 mm headphone jack is located at the top of the phone. This allowed me to slip the phone into my pocket bottom first and listen to music or my podcasts without damaging my earphones or causing myself any discomfort.

The phone’s volume keys and power/lock button are on its right side, while the SIM card and memory card tray are on its left side.

Unlike the Nokia 6.1 which only accommodates either two SIM cards without a memory card or one SIM card and a memory drive, the manufacturers of the 6.2 decided to solve the problem by making space for those cards in their new release.

At the bottom of this smartphone are the two vents for the 6.2’s loudspeakers, another microphone, and a Type-C USB port for charging the device or carrying out transfers to and from the device’s 64GB memory space.

The Nokia 6.2 – does it really keep getting better?

There is something reassuring about owning a Nokia smartphone. For me, it’s the combination of its understated yet elegant and sturdy hardware design combined with its steady performance. In my opinion, the makers of the Nokia 6.2 kept to the standards Nokia enthusiasts have come to expect.

This version of Nokia’s smartphone is proof that things will only keep improving — at the very least in Nokia’s display, its camera, battery life and even software updates. But how well does this phone stack up against its predecessors – the Nokia 6.1 and 6.1 Plus.

Weighing a total of 180 grams, this phone is heavy enough to feel firm but not enough to think about adding extra security in the form of a phone case; you know, just in case.

The 6.2 comes with a much larger screen display at 6.3 inches – 0.5 inches larger than the Nokia 6.1 Plus. The extra space allowed for a wider and better viewing experience, which felt much more satisfying, compared to the 6.1 or the 6.1 Plus.

The battery life was a bit disappointing, however, it still did better than its other family members, which isn’t surprising given the higher battery capacity it has. At this point, it is safe to say that Nokia has yet to replicate the universal success in performance and durability that was the Nokia 3310 battery life. I hope that things will get better.

I tested the 3500mAh battery over a 30-minute period of long game play sessions, hotspot use, and general browsing. In that time, the battery level dropped from 100% to 65%  while the phone got hot as a result of the continued use.

When I focused on using the device on everyday activities and light browsing for 8 hours after my commute, the battery level dropped to 25%. Most of the “light browsing” occurred while I slept.

Afterwards, the battery was stuck on 25% for 3 hours before falling to 9%.

Phone brands stick an AI label on anything these days. Overall, the 6.2 main camera seems better than OK in terms of features and performance. And the AI system did not need to learn much about my picture taking habits to produce normal to good visuals.

For some reason, these features in the Nokia 6.2 camera brought out the photographer in me at 8 p.m. in a Lagos bus.

Trying to take pictures discreetly, the camera captured the images quickly and clearly, I navigated between wide angle shots and bokeh as best possible given the bus’ limited light and unsteady motion.

Photo shot in a Lagos bus at night with the Nokia 6.2 highlighting the benefits of its wide angle and depth of field capabilities

The camera works well under low light situations, but the quality of the photograph can be slightly improved depending on the camera features used like pro or even low light.

The camera app is easy to go through and better organised compared to the other camera apps in the Nokia 6 family, but for the most part, they have similar features.

I tried out the portrait mode on the selfie camera hoping for something spectacular. I didn’t get what I wanted, but this would suffice, I guess:

Nokia 6.2 Portrait with the selfie camera

Surprisingly, the camera app has the option of taking photographs in camera RAW file format. I confirmed this when the photo opened up Camera Raw in Photoshop before getting into the main software.

This is useful especially if you want the option to heavily edit the photograph in Photoshop, a very useful feature for mobile photographers.

The features of the camera app seem similar, except that the 6.2 has a more seamless user experience design than the others.

The face recognition feature is new in the Nokia 6 family and responded only when I had my face in position for the front camera to assess whom it was dealing with. I noticed that blinking somehow helped it verify me.

Everything else was easy to use and fast to access the phone with. As an upgrade in the 6 family, there isn’t much that changes other than the addition of facial recognition.

The Nokia 6.2 starts at about N75,000 and goes up from there in the Nigerian market. This seems like a good bargain, depending on the size of your wallet, of course.

The Nokia 6.2 felt so easy and intuitive for me to use. For a mid-range, high-performance, mobile device, it is not as expensive as I had expected, especially compared to the other Nokia smartphones in the 6 family.

The camera quality and navigation are above average and give users a versatile experience.

As an upgrade in the Nokia 6 range, it is something that I would consider getting. But I would have to remind myself to check out other phones in the Nokia arsenal that would probably perform better – and are more expensive – such as the Nokias’ 7, 8 and 9 before I made my decision.