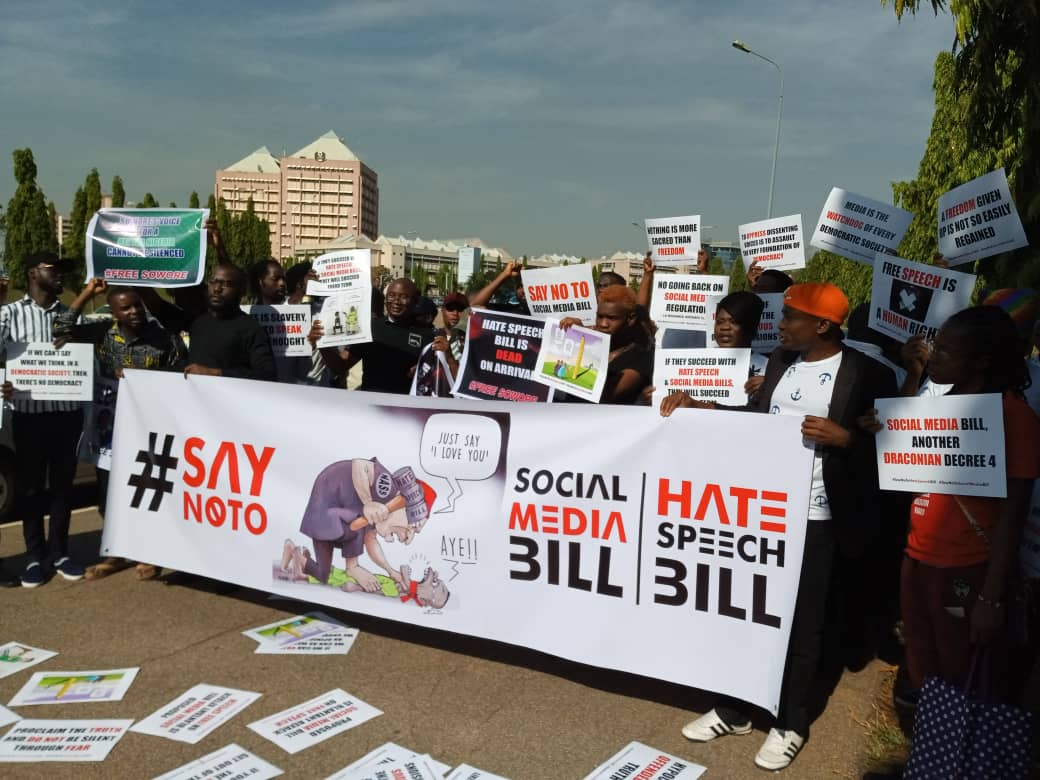 Over the past few weeks, the Internet has been abuzz with stories and reactions to the proposed bill by the Nigerian Senate to place restrictions on social media and Nigeria’s Internet space.

The bill has been met with widespread criticism with many faulting several of its clauses for a perceived hindrance to free speech.

Still, a lot of grey areas shroud the proposed bill in what is fast becoming a norm for African governments.

How did it begin?

The social media restriction discussion has been going on for a while. A version tagged “Frivolous Petitions (Prohibition) Bill 2015” aka Social Media Bill, was introduced in 2016 during the 8th National Assembly but got the axe as it met heated protests.

For 2019, Nigerians got the first whiff when President Muhammadu Buhari declined to sign the Digital Rights Bill on the grounds that it “covers too many technical subjects and fails to address any of them extensively.”

The Digital Rights Bill was supposed to be one that protected the fundamental rights of Nigerians on the Internet and ensured their safety and well being.

Another ominous sign was a part of the president’s independence day speech, which seemingly foretold plans of impending Internet censorship.

What exactly is the Social Media Bill?

On Tuesday, November 5, 2019, the first reading for a bill to regulate Nigeria’s online space was once again held at the upper house of the National Assembly.

It is important to note that there are two bills in the Nigerian Senate that have irked several Nigerians. One is the reintroduced Hate Speech Bill, while the other is dubbed the Social Media Bill.

Also important is the fact that there are two versions of the Hate Speech Bill, one read by the Nigerian Senate and the other by the National House of Representatives.

On the other hand, the current Hate Speech Bill, otherwise called the National Commission for the Prohibition of Hate Speeches (Est. etc.) Bill, 2019, was first read on November 11 and is sponsored by Sabi Abdullahi, Deputy Chief Whip of the Nigerian Senate, representing Niger North Senatorial District.

This bill states that anyone found guilty of hate speech is liable to life imprisonment and if it leads to the death of another, the guilty party should be sentenced to death by hanging.

The backlash from the Hate Speech Bill has seen its sponsor remove the attached death penalty.

How is the Social Media Bill different?

The Social Media Bill is firmly backed by some other senators like Elisha Abbo, senator representing Adamawa North Senatorial District.

Summarily, the supposed idea behind the introduction of the bill is to curb the spread of falsehood and fake news in Nigeria which, according to Muhammad Sani, has threatened the unity of the country.

Just a few weeks later, on November 20, the bill’s second reading was held at the Nigerian Senate.

Apparently, the bill was not widely accepted by the house as it met some opposition from senators like Chimaroke Nnamani of Enugu East Senatorial District and even members of the House of Representatives, like Dachung Bagos of Plateau State, condemned its effect on our democracy.

What exactly does the bill state?

According to the bill, a person must not:

Transmit a statement that is false or,

Anyone guilty of any of the above is liable to a fine of ₦300,000, ($826) 3 years imprisonment, or both (for an individual), and a fine not exceeding ₦10 million ($27550) (for corporate organisations).
The same punishment applies to fake online accounts that transmit any of the statements listed above.

Was the bill really plagiarised?

Tellingly, the major contents of the bill, beginning from its official title seem to have a lot in common with a bill passed by the Parliament of Singapore earlier in May 2019.

The key difference is while the Singaporean bill explicitly defines some terms, the Nigerian bill leaves a lot in the air with frightening ambiguity.

Sen. Sabi, however, defended the allegations of plagiarism, alleging that governing practices may be copied from other jurisdictions and legislative documents from countries are not copyrighted.

It is posterous that this is said to be an instance of plagiarism. All over the world, Legislation in other Jurisdictions do influence the form and substances in other jurisdictions, particularly and Present the same or similar challenges of regulation.

Singapore ranks 151 in the world Press Freedom Index, which is a worrying scenario when one takes into consideration Nigeria’s current ranking of 120.

What has been happening outside Nigeria?

This type of bill is not exclusive to Nigeria, as other African countries have been making moves to clamp down on social media and Internet activities in the country.

Cases in point are the Tanzanian $930 annual blogger licence fee, the Ugandan government’s introduction of the social media tax, the internet shutdown in Benin Republic, and Egypt’s Internet censorship.

Suggested Read: How not to regulate social media in Africa

South Africa’s Film and Publications Amendment Bill — named the Internet Censorship Bill by critics as a result of its stance on hate speech — mandated Internet Service Providers (ISPs) to shut down the sites that distributed content considered to be hate speech.

In all cases, instances of falsehood and fake news were cited as reasons for such tight control of Internet activities.

Even scarier is the fact that these bills were passed into law, despite the widespread criticism they met with when introduced.

Who does it affect?

The bill gives law enforcement agents the power to arrest those who are found guilty of spreading false information online. While this might be a good thing, any user of the Internet could fall on the wrong side of the proposed bill seeing as “falsehood” or “Truth” have relative meanings.

The major institutions/individuals the new bill directly targets include, but are not limited to:

Targeting these institutions/individuals means access to information could be either controlled/doctored by the government at best, or simply non-existent at worst.

Now you might be a model citizen who may neither lie nor cause anyone harm, but the broad spectrum of persons/activities the bill could affect means that anyone might be deprived access to the Internet as a result of the actions of another.

As pointed out by Techpoint’s guest author, Enyioma Madubuike, a legal consultant, suppressing free speech can be a very dangerous thing as it gives government a monopoly on the truth.

As for the excesses the bill is trying to curb, there are pre-existing laws and measures already in place to control such acts.

What can you do for now?

Protesters against the Social Media Bill

Nigerians on social media are not taking kindly to this bill, with some of them finding ways of placing pressure on the elected lawmakers representing each Nigerian constituency.

A petition titled “Stop the Social Media Bill! You can no longer take our rights from us” is currently on the social activism platform, Change.org and over 75,000 of the 150,000 signatures targeted have been gotten.

Pressing even further, a Nigerian Twitter user created a thread containing the contact information of the 109 senators at the Nigerian National House of Assembly for anyone concerned to call their respective representatives in the Nigerian Senate.

Below are the contact details of the 109 Senators. Don't just retweet, but also take action. Send an email! Send text messages! Call them! Tell your friends and families to do the same! TALK TO YOUR SENATORS!#Thread

Nigeria’s tech community has duly responded to that thread, developing several applications that can be used to send automated messages relaying concerns about the bill to the respective lawmakers in the created thread.

Check out some of these apps you can use here.

Wow this took me throught the nook and cranny which are hidden about the said bill. It was a good read.