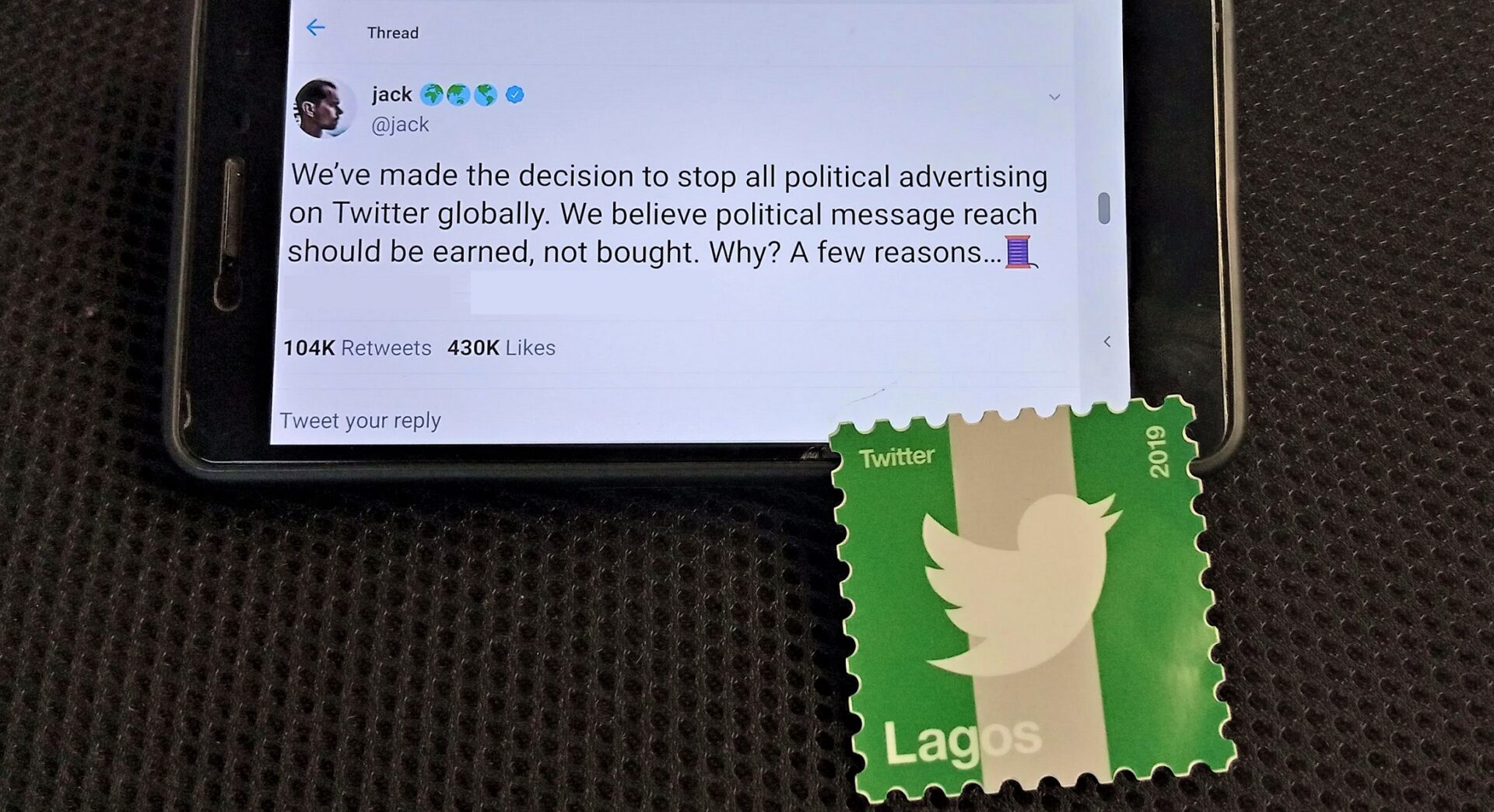 Jack Dorsey’s visit to Africa’s most populous country came and went like a whirlwind. Or at least, it was a brief as a few tweets he made while he was in the country.

So grateful to finally be in Nigeria 🇳🇬

Although much of the excitement has waned, there will be a little discussion on the controversies that have plagued Nigeria and Nigerians on Twitter. Worthy mentions of politically divisive issues and events include the COZA rape scandal, the Occupy Nigeria movement, and the recent presidential elections.

According to Amy Rose — Twitter’s spokesperson — the suspension of Nigerian digital marketers (often called influencers) on Twitter just before the 2019 presidential elections was the result of  “spam violations.”

Twitter’s recent move to ban political advertising tells us what the social media company has decided to do to re-establish the integrity many critics have claimed it lost over the years.

A move many agree is in direct opposition to Facebook’s decision on the subject has, really low financial repercussions, and puts the technology company on a much higher moral ground.

We’ve made the decision to stop all political advertising on Twitter globally. We believe political message reach should be earned, not bought. Why? A few reasons…🧵

This brings up the question of the ripple effects this policy would have had on Nigeria had the elections been in 2020. Previously, politicians could essentially pay for political messages on these platforms without any restrictions or checks on the authenticity of the messages.

But since Jack’s public statement against promoting such advertising, Twitter has been established as a defender of social media’s political integrity.

Use of Machine Learning (ML) to curb automated political campaigns

This – according to Jack – is perhaps the single biggest improvement around elections.

Our work against automations and coordinated campaigns. Partnering with government agencies to improve communication around threats #karajack

Since the announcement of the ML system, Twitter has implemented it in the 2019 elections of Mexico and India. We can safely say that this would have been applied had Nigeria’s elections not been before the system was put in place.

Jack has also made statements about “partnering with government agencies to improve communication around threats.” Although promises were made, this did not seem to occur during the past presidential elections.

On political tweets motivated by outrage

I also don’t feel good about how Twitter tends to incentivize outrage, fast takes, short term thinking, echo chambers, and fragmented conversation and consideration. Are they fixable? I believe we can do a lot to address. And likely have to change more fundamentals to do so.

Twitter users getting combative online has been cited as a major problem across Twitter, and Nigerian Twitter is no exception especially when political lines are drawn and alliances questioned.

But the ban on political ads would help reduce the occurrence of this problem, at least for politically related issues. Had the presidential elections occurred sometime after 2019, the animosity experienced by many on the platform would have been significantly less.

But that is easy to assume, and much harder to observe, especially since to do the latter we would have to wait for another election or politically charged issue to come up on Twitter again.