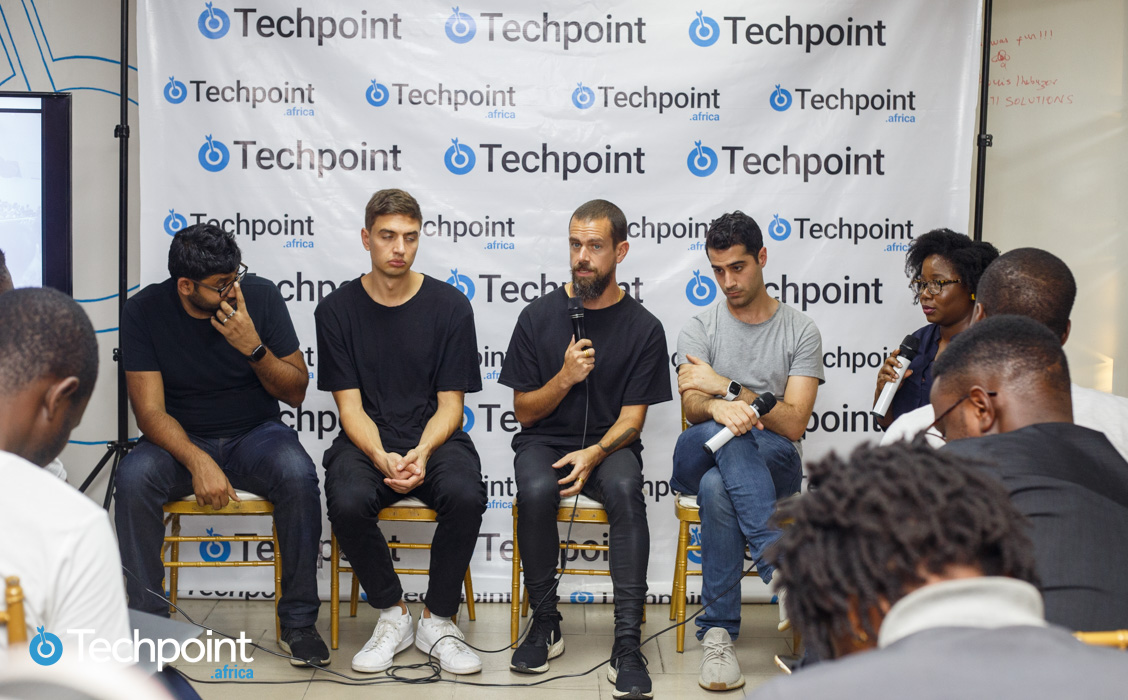 On Thursday, 7th of November 2019, co-founder and CEO of social media service, Twitter, and mobile payments company, Square, Jack Dorsey, came to Lagos, Nigeria on the first leg of an African tour that will span Ethiopia, Ghana, Nigeria, and South Africa.

The next day in Lagos, Jack met with entrepreneurs at the the Bosun Tijan-led Co-Creation Hub (CcHUB) and afterwards headed to the University of Lagos (Unilag).

He also visited Andela and ended the day with a well-attended town hall meeting at the Techpoint Africa headquarters in Lagos.

Members of the executive team

As an alumnus of the Indian Institute of Technology Bombay, as well as having a doctorate in computer science from Stanford University, Parag was chosen in 2018 to lead the technology team of the micro-blogging site after working for Twitter as a distinguished software engineer for over six years.

According to Parag’s LinkedIn profile, he assumed the CTO position in October 2017, after six years of being in his previous role.

Before that, he focused on research in Microsoft, Yahoo!, and AT&T labs up until October 2011 when he joined Twitter.

Parag is one of the people responsible for Twitter’s foray into the Artificial Intelligence (AI) and Machine Learning (ML) space, and may have played a major part in utilising the technology to automate campaigns on the platform. Something that Jack Dorsey has cited as perhaps the single biggest improvement around elections since he became CEO of the company he co-founded.

During their visit to Techpoint Africa’s HQ, Parag made it clear that Twitter is looking outside the Bay Area for engineering talent.

“We’re looking to have half of our engineers out of San Francisco,” said the CTO.

Kayvon Beykpour is the co-founder and CEO of Twitter’s video streaming application, Periscope.

Beykpour started Periscope with Joe Bernstein in early 2014. Less than a year later, in January 2015, and before it publicly launched, the app was acquired by Twitter.

In 2017, Beykpour started overseeing all the video initiatives at Twitter as a product lead.

After the presentation, Beykpour called Oladosu back and offered him a job on the spot.

“I would love for you to maybe consider come joining the company [Twitter],” Beykpour said.

“Things went way better than I expected”. @dara_tobi, creator of @QuotedReplies, reacts to getting a job offer from Twitter. He also discusses the fate of his viral Twitter bot in this interview https://t.co/ZVQKwH6mc3 pic.twitter.com/1wgYOxjHv5

Head of US Sports Partnerships at Twitter, TJ Adeshola

He is also the executive sponsor of Blackbirds, Twitter’s business resource group that celebrates and encourages diverse perspectives.

Adeshola is Nigerian by origin, but he is not the only Nigerian working at Twitter.

Michael Montano studied electrical engineering at The University of Toronto, graduating in 2008.

After his first startup, IPartee, which he co-founded with a roommate back in high school, Mike went on to participate in the 2008 Y Combinator (YC) summer programme to start BackType, a service that lets people find, follow, and share comments from across the web.

At YC, Mike learned how important it is to build something that people want and that building something that’s useful right away is a huge advantage.

He joined Twitter in 2011 as an engineer, and after a major reorganisation by Jack on June 28, 2018, Mike was tasked with leading the company’s engineering team.

Even as Twitter’s lead engineer, Mike admits to working from home on Tuesdays and Thursdays. He claims he is more productive on those days and able to spend more time on deeper, more strategic work. Tweeting under the hashtag #WhyIWorkFromHome last month, Mike explained that his journey into remote work was initially restricted to afternoons before he made it an all-day affair.

Before IPartee, Mike started a design and development company called, UrbanTwelve, but he doesn’t consider that to be a startup.