Quoted Replies: The viral Twitter bot built by a Nigerian 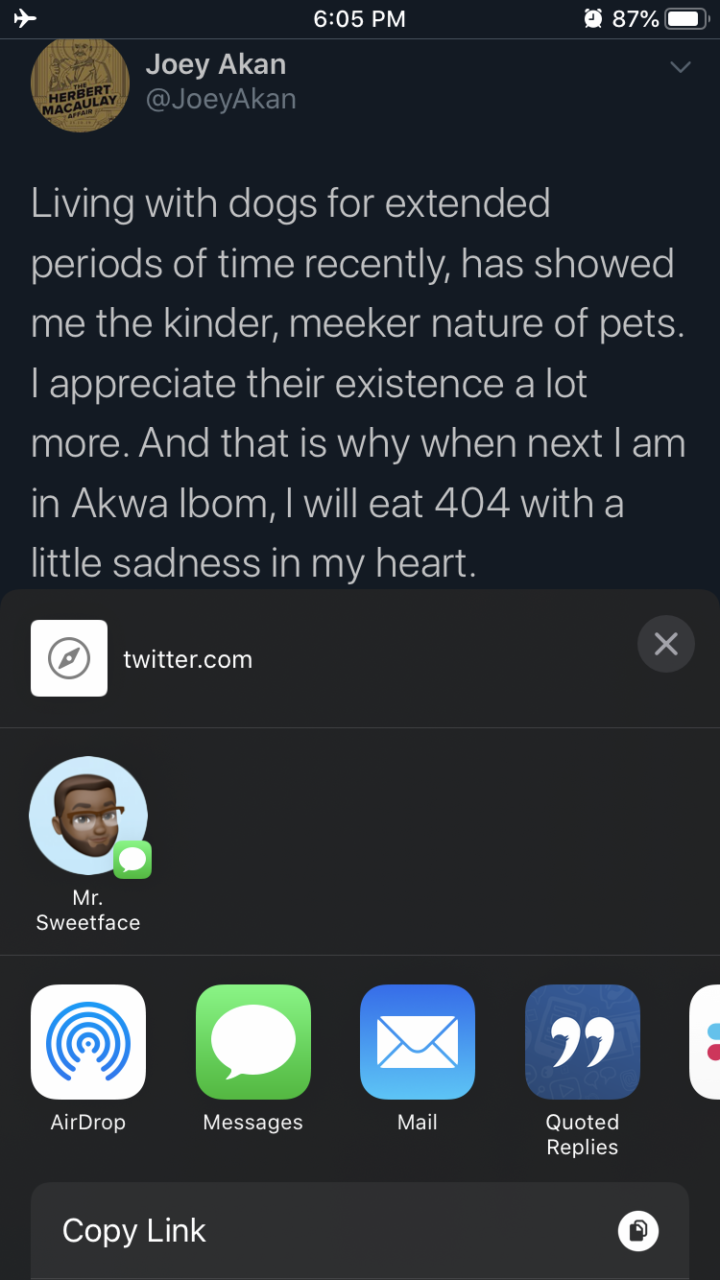 In April 2015, Twitter unveiled its “retweet with a comment” feature which would make it easier for its users to add comments to tweets.

Up until that point, if you wanted to add a comment to a tweet, you’d have to either copy and paste the text, and then quote it or comment directly to the tweet. Needless to say, it was tedious.

While quoting tweets has become seamless, finding quoted replies to other people’s tweets isn’t quite as simple. Or so it seems.

Really, it just requires simply copying the  tweet’s URL and pasting it in the Twitter search bar with a few modifications. You’ll see an auto-updating timeline of every single quoted retweet on that particular tweet. I bet you probably didn’t know that.

Quoted Replies is a Twitter-based bot that helps you find quoted replies of tweets without having to go through the hassle of copying, pasting, and searching. If you’re a regular Twitter user, you might have seen the @QuotedReplies handle under some of the most popular tweets or even used it.

Dara Oladosu, a Nigerian software developer built the bot in December 2018 after he stumbled upon the ability to copy a tweet’s link and search Twitter for its quoted replies.

Shortly after, he built a Chrome extension that helps users easily find quoted replies for any tweet on Twitter’s web version.

Hamza Fetuga and Abdulhafeez Sagaya, Lagos-based mobile app developers, were some of the early users of the Quote Replies Chrome extension.

“I had been following Dara for a while and have used one of his other Chrome extensions. So when he tweeted the link to the extension, I tried it out and knew instantly that it was something that I was going to use a lot because I mostly use the web version of Twitter,” said Hamza during a chat with Techpoint.

Hamza and Hafeez both reached out to Dara and decided to build Android and iOS versions of the bot respectively.

While the Chrome extension was being used by a few people, the bot wasn’t gaining much traction because according to Dara, Twitter kept banning the bot every other day.

“People would not be able to see the link the bot posted. This continued until July 2019 when I was able to figure out what the issue was and then I was able to prevent it from being banned,” he recalled.

Since then, @QuoteReplies has garnered users from all over the world, mostly from Nigeria, India, Philippines, Indonesia, and the United States.

“So far, It has about 26.3K followers and over 67K mentions with 25.7 million impressions for the month of September alone,” Dara said proudly.

The mobile apps launched less than a month ago aren’t doing badly either. Hamza says the Android app has been downloaded 545 times and as of this morning, been used on 5,400 tweets. On it, you can find the top quoted tweets.

The iOS app, which has an additional feature for downloading photos, videos, and gifs from Twitter, has been downloaded 680 times and has 3,800 impressions.

According to Hafeez, most of the users of the app are in the US.

Using the Quoted Replies is quite easy and straightforward.

The apps are the mobile alternatives for those who do not want people to know they’re interested in a particular tweet.

With Quoted Replies racking up impressive numbers across all its versions, it only makes sense for the team behind it to begin looking for ways to monetise it. But first, they want to get more people to use it.

“We put it on Product Hunt last week and that has brought some more attention to the apps and bot. Popular video content creator Fisayo Fosudo did an independent review of the bot, that helped too. Now, we’re looking at doing some influencer marketing to get the apps into more hands,” said Hamza.

They also plan to begin serving ads on the native apps and looking for creative ways to monetise the bot’s growing numbers.

UPDATE: During a Techpoint town hall with Twitter CEO, Jack Dorsey and his team, Quoted Replies creator, Dara Oladosu was offered a job at Twitter to help build a native “quoted tweet” feature for the platform.

“Things went way better than I expected,” he told Techpoint in a follow-up interview.