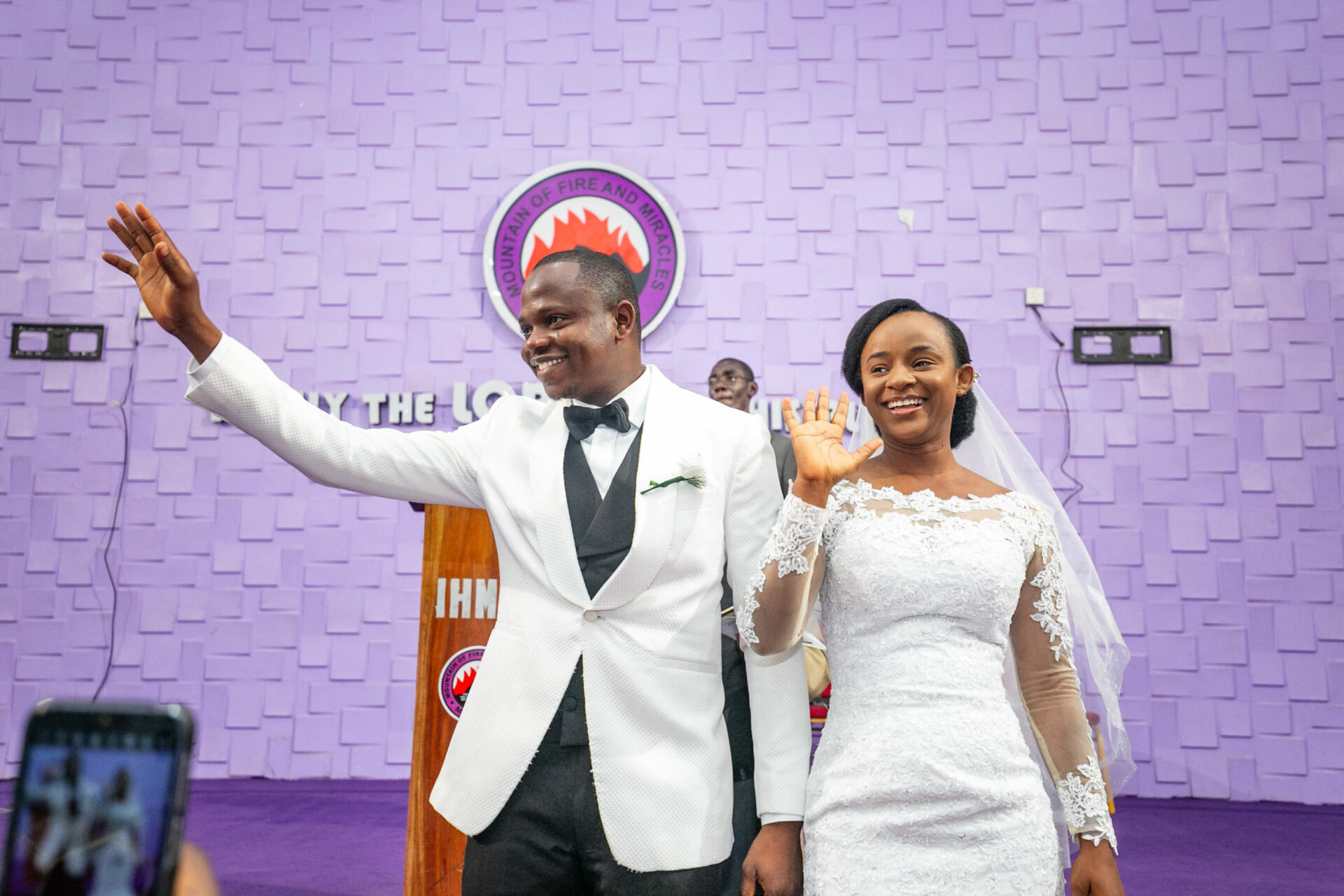 On August 17, Techpoint cofounder and CEO Adewale Yusuf, tied the knot with his sweetheart Blessing in an intimate ceremony with a few family and friends in attendance.

It sounds like every other Lagos wedding but there was something unsual about this one. The wedding invitation Adewale and Blessing sent out had “NO RECEPTION” written boldly on it. However, we had a surprise reception for the couple with only team members, as well as brothers, sisters and a few friends of the couple in attendance.

Last week, about two weeks after the wedding, Adewale published a post on Facebook expressing his surprise at the party his team organised for him. In the post, he shared a picture (which he has now taken down) of his wedding invitation.

Before Wale took down the picture, many people who were intrigued by the fact that the couple didn’t plan a reception for their wedding began sharing it. Shortly after, it became a hot topic on all social media platforms, blogs and radio shows in Nigeria, and even Ghana and Kenya.

How wedding ceremony with ‘no reception’ backfired on this couple https://t.co/NZAhCNvDRc pic.twitter.com/32Cg14BH2t

Nigerians have pushed couples to the height of publicly announcing. NO RECEPTION❌❌❌❌ pic.twitter.com/StC4IOOAc8

I used to think having a small wedding was it, apparently No Reception is the real life hack.

I see a lot of pple spreading the 'no reception' thingy around.
I laugh in African parents' style.
I'm laughing at myself too bcuz small gist with my father that I mentioned just 50guests, he almost had a cardiac arrest.

Let me wed in peace .. Operation No Reception #unexpected pic.twitter.com/hDFIIOPY5v

That “no reception” thing sounds like me. I will never spend tens of millions to impress strangers at my wedding, I will use that money to enjoy life after the wedding. Thanks.

Here’s how Adewale and Blessing reacted to all the social media comments;

So the weekend was full of drama as our wedding IV trended because of our #NoReception decision. I'm glad my wife is laughing about it now, because it wasn't funny over the weekend. Thanks to everyone that insulted or defended us, we're happy with our decision. pic.twitter.com/wNRhmPQ8BL

This week, foreign nationals in South Africa were attacked while their businesses were destroyed and looted in fresh xenophobic attacks.

This is what's happening at #JoburgCBD right now attacks on foreign nationals. #Xenophobia attack. 💔 #BreeTaxiRank Make sure ur Families are safe guys call check up on them. pic.twitter.com/6Be2P9HjFS

In the wake of the attacks, certain horrifying pictures and videos were circulating social media, resulting in more outrage, especially from non-South Africans across Africa.

#SouthAfrica has crossed the boundary of sanity this time. They've gone beyond the point of no return and nothing will fix this emnity btw #Nigeria and them for generations to come. 😫😭

Vengeance of blood will never end in your lineage. 😢 #Xenophobiapic.twitter.com/LoapEZstmy

Say no to black on black violence. End xenophobia pic.twitter.com/wWnZ8V8oox

This is really not #Xenophobia it is more of an illiterate, hopeless and impoverished community who think everyone else is the cause of their misery other than themselves or their own. Wake up South Africa ! You cannot get to the top by bringing others down.#Xenophobia pic.twitter.com/glKmLSz82D

However, investigations reveal that some of these videos and photos were from months and even years ago.

Suggested Read: How social media may have fueled the anti-xenophobia outrage in Nigeria

At some point, it appeared that Nigerians in South Africa were bearing the most brunt of the attacks. Here’s how Nigerians back home reacted on social media.

The reason for xenophobia 👇👇 not drugs….the same drugs excuse this fools use in looting Somalian and Pakistan shops #Xenophobia pic.twitter.com/NGsycr9M6p

It led to these…

#shoprite My one man peaceful protest at their Surulere store this morning, against #Xenophobia pic.twitter.com/Nr0UnsCnF1

Former Zimbabwean prime minister Robert Mugabe is dead. He died today in Singapore where he had reportedly been receiving medical treatment for a long time. He was 95 years old.

Robert Mugabe, who led Zimbabwe into independence and ruled the country for 37 years marked with repression and violence, has died at age 95. pic.twitter.com/n0u2ai1nUP

I learnt this morning about the passing of an African liberation icon & great Pan-Africanist, His Excellency Robert Mugabe. I join @edmnangagwa, the people of Zimbabwe and the entire African continent in mourning the demise of this great son of Africa. May his soul rest in peace.

Robert Gabriel Mugabe is dead at 95. One of the most controversial politicians in the history of politics. A liberator to some, a ruinous dictator to others. His legacy is far from settled. pic.twitter.com/Dmw2rSgIGG

My favourite memory of Mugabe is the Northern British comedian who noted it spells e-ba-gum backwards.

President Robert Mugabe once said:Tony Blair have you ever seen any Zimbabwean claiming the Land in Britain? Even today still no answer pic.twitter.com/EWvdPOcBtY

President Robert Mugabe was a true African hero & freedom fighter who dedicated his entire life to the struggle to free his people and land. He fought to set his people & country free from the imperialists. South Africa is still fighting for freedom. RIP African Hero pic.twitter.com/RXbC8qDFYd

Mugabe was a liberation hero who like others, made mistakes during his reign.

Certain governments hated Mugabe because he basically told them to suck their mums. Their issue with him wasn’t a “humanitarian” one. They just hated that an African leader refused to show any sort of deference to their whims.

Mugabe destroyed farms (incl black owned ones), was responsible for a genocide, destroyed Zim’s economy & had his people live in a climate of fear. But people praise him as a hero because he pissed off white people & gave farms to his friends. The bar is in Hell

Mugabe terrorized Zimbabwe. He was ruthless, power hungry, maniacal, a murderer, a leftist, a cheater, a racist and drove his country to ruin. There’s nothing to celebrate about his life. He wasted it. He used it to destroy lives and enrich himself. A traitor to his own nation.

If Mugabe's long and prosperous life, and his painless death from natural causes doesn't make you confirm that Karma is an empty scam designed to prevent you from seeking redress, or nursing your helplessness, then I don't know what else will. pic.twitter.com/Eh25w2hwvt

Robeet Mugabe is dead. May all tyrants and dictators join him soon.

Robert Mugabe is dead, and all of a sudden he is now a good man, 😂😂 the same man that ruled for a period of 4 decades in a democratic system of government, like he is the only one born to rule. Truth has finally become a foreign language in Africa. #RIPMugabe

Mugabe is dead. A man wth so much promise, so much education, so much political skill. He could have been revered like Madiba. Instead he chose racism and destroyed the prosperous Zimbabwe and turned it into a beggars’ state. I hope we shall never see the likes of him again.