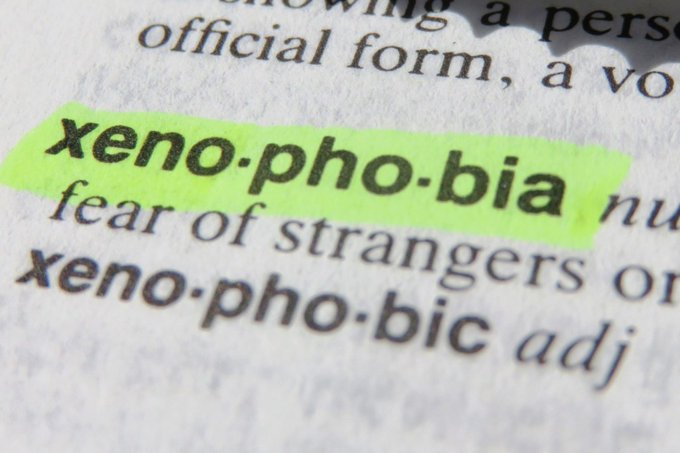 While the attacks on foreigners in South Africa are real — resulting in the loss of lives and destruction of properties  — social media is being used to worsen the situation, especially for an audience outside the country.

Since the news of xenophobic attacks broke, many people have  incited outrage by circulating old videos and photos of violence from other countries and passing them off as recent ones.

Earlier this week, a video of a man being burned alive began making the rounds on social media with captions describing the clip as a xenophobic attack against a foreign national, some even claimed he was a Nigerian.

However, the video was apparently from a jungle justice attack on an alleged South African robber in January 2019, not a xenophobic attack.

Another trending picture of a man set ablaze was apparently from a 2008 xenophobic attack. The photo of was included in a 2008 report published by Boston Globe Media.

#Xenophobia: It's so unfortunate for a nation to have leaders that are handicaps. Men that their words are paper-weight. 😭 A govt that will not be there when you call on them. #Nigerians are becoming world sacrificial lambs and everything is happening so fast and all at once. pic.twitter.com/lEzFofoijm

No vandalization, looting or burning of malls and offices before Linda Ikeji and other bloggers posted this fake news. pic.twitter.com/2AD9WnQvug

Consequently, these horrifying pictures and videos of xenophobic violence in South Africa sparked outrage among Africans whose countrymen were being attacked, especially Nigerians.

“I was triggered,” said Oluwaseyifunmi Meg Ricketts, a Lagos-based educational consultant during a chat with Techpoint.

“Recall that this xenophobic attack didn’t start this year, there was a report on it two years ago. When the Internet became agog with it last year, I was bothered by the graphic pictures. When this one started, I just knew that I had to register my displeasure and social media was not the appropriate way.”

#shoprite My one man peaceful protest at their Surulere store this morning, against #Xenophobia pic.twitter.com/Nr0UnsCnF1

And so Seyifunmi embarked on a one-woman peaceful protest at the Shoprite outlet in Surulere, Lagos, with a cardboard sign that reads “Shoprite…f**king tell your South African people to stop killing Nigerians in South Africa. Signed: Meg Ricketts.”

However, when policemen approached Seyifunmi and asked her to let the government handle the situation, she left and went home. Unfortunately, the government was unable to handle what would follow.

According to reports, protesters threatened to attack Adeniran Ogunsanya Shopping Mall, as well as Multichoice and MTN offices — all with their parent companies in South Africa — in the Surulere area but they were prevented by officers of the police force. However, stores within the mall were reportedly looted on Tuesday night.

Meanwhile, at Circle Mall, Lekki, some Nigerians, under the guise of anti-xenophobic protests, broke into the Shoprite outlet located within the mall and made away with items from Shoprite and its neighbouring stores. One of the protesters was reportedly shot dead by a policeman.

And MTN and Shoprite outlets outside Lagos have also been attacked.

While these attacks were ongoing, Nigerians and South Africans were going at it on Twitter, especially after popular South African rapper, AKA, posted a couple of tweets directed at Nigerians in the wake of the xenophobic attacks.

His controversial tweets, those of other South Africans, and outrage from news outlets about the attack on Nigerians in South Africa have led a few Nigerian celebrities to cut ties with South Africa.

I refuse to watch the barbaric butchering of my people in SA. This is SICK. For this reason I will NOT be performing at the upcoming DSTV delicious Festival in Johannesburg on the 21st of September. My prayers are with all the victims and families affected by this.

Clearly, xenophobia should be condemned and all perpetrators of these attacks should be brought to justice. However, in a sensitive situation like this, we should all be mindful of what we read and share on social media.