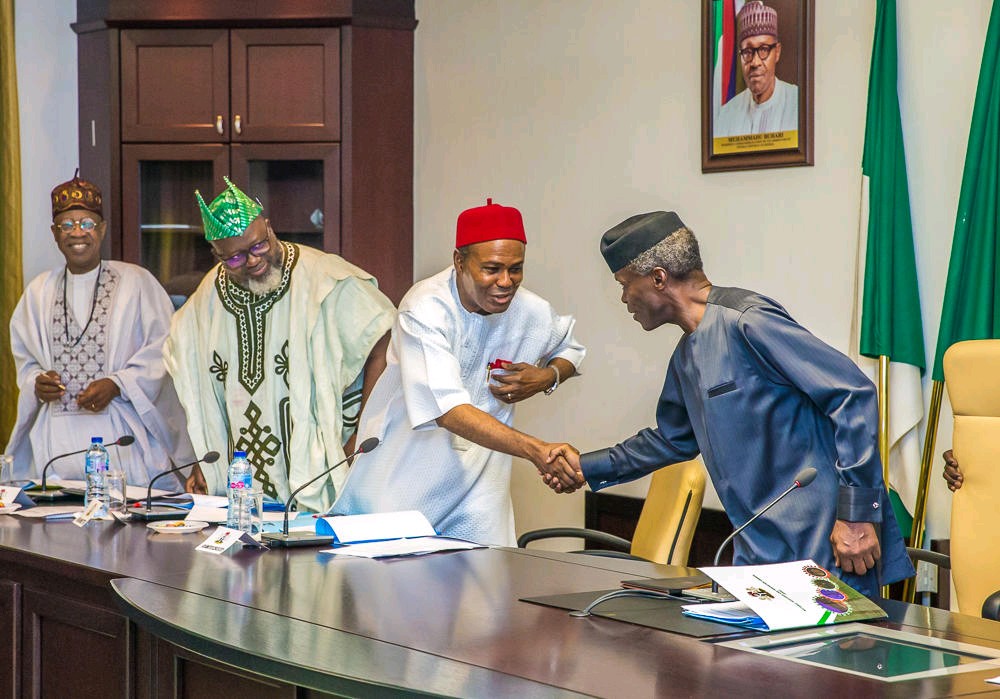 Photos of the meeting, which was held at the presidential villa, Abuja showed a host of other politicians seated with the Vice President.

This then begs the question of what the NRIC really is about.

The NRIC was inaugurated on February 18, 2014, after years of several revisions of the National Science Technology and Innovation Policy which was first constitutionally recognised in 1986.

The aim is to accelerate the growth of innovation-based entrepreneurship in the country and to create the conditions for the commercialisation of current and future research findings in Nigerian universities and research institutes.

Two years after its inauguration, the NRIC Bill (PDF) was formally passed into law to cement the constitutional provisions of the NRIC and paving way for the inaguration of members.

The council consists of the President (as the Chairman) Vice President (Vice Chairman), all ministers of the Federal Republic of Nigeria, a representative of the Manufacturers Association of Nigeria (MAN), President, Nigerian Association of Chambers of Commerce, Industry, Mines and Agriculture (NACCIMA), Executive Secretary, National Research and Innovation Foundation (as the Secretary of the Council) and other number of persons not exceeding five appointed by the President.

At the first ever NRIC meeting that took place in January 2016, President Muhammadu Buhari tasked the body to deepen scientific research in Nigeria, and to produce Nigerian Nobel laureates in the sciences (since literature professor, Wole Soyinka remains Nigeria’s only Nobel laureate).

Are we on track?

In the past decade, a growing number of countries (especially European) have established national councils for innovation or for science, technology and innovation.

Apparently, the innovation councils address a growing need for strengthening the coordination, inclusiveness and, ultimately, effectiveness of innovation policy governance.

However, the absence of young faces and recognisable technocrats from the recent NRIC meeting did not go unnoticed. This raises concerns as to whether Nigeria is truly ready for the digital economy if only those from the older generation are addressing critical matters around research and innovation for the country.

Granted, the structure of the NRIC provided for the establishment of a Technical Advisory Committee (TAC) consisting of technocrats from various fields, but it is important at this point to ascertain how much of this is already into effect.

Suggested Read: 3 months after its inauguration, the Presidential Advisory Group on Technology and Creativity seems to be stalling

The reason is because the National Science Technology and Innovation Policy prescribes NRIC as the highest decision-making organ of government in research and innovation where Nigeria is concerned.

The body therefore wields a kind of power that could determine the fate of stakeholders (down to the one-man entrepreneur) in Nigeria’s technology space.

As per what the subject of the recent deliberation was all about, Techpoint reached out to the senior special assistant to the president on documentation at Federal Government of Nigeria, Sesan Adeboyejo — from whose social media account information about the meeting was broken to public notice. He has fielded no comment ever since.

The Vice President even has a section on his personal website dedicated to the said meeting of March 25th, but surprisingly there are no details as to the outcome of the meeting beyond just a single photo.