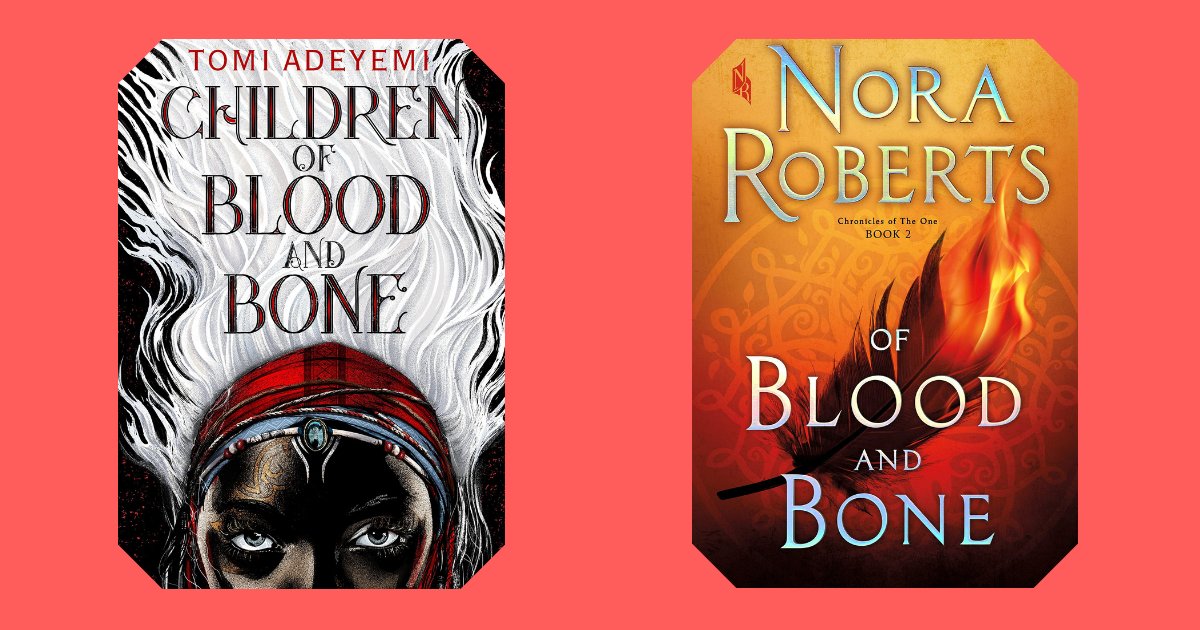 Get this, Tomi’s book is titled Children of Blood and Bone (Legacy of Orisa #1) while Nora’s is titled Of Blood and Bone: Chronicles of the one #2). They both have Blood and Bone in common as you can see. According to gist on Twitter, Nora announced her book title earlier in the year than Tomi.

Calm down, there are plenty books with the same title

There are so many books with Blood And Bone in their title. Nora Roberts is not trying to 'shamelessly' profit off of you. The covers aren't even similar for crying out loud! pic.twitter.com/BkTIST4trO

You have it all wrong if you think Nora Roberts couldn't have intended to ride on the Blood and Bone wave.

She is big and all, but when was the last time you read her book? The Year One?

She is trending now.

Cut Tomi some slack and quit gaslighting her.

I actually do believe Nora Roberts jumped on a trending topic by naming her new book something really close to Tomi's. She's been accused of this before. When you're as big a machine as Nora is, these kind of machinations are not unusual.

Well, since Tomi Adeyemi is dragging Nora Roberts for shamelessly trying to profit off "Of Blood and Bone", maybe Toke Makinwa should drag Michelle Obama for "stealing" her book tittle too.

What’s a trending topic without memes?

Lmao "Blood and Bone" sounds like a title my uncreative, dumb, self can come up with.

I saw Nora Roberts trending and I thought she was dead, my heart nearly gave out. pic.twitter.com/NK8aesOEqC

Someone legit contacted me and said I'm a Black/POC author and shouldn't be making a case for Nora Roberts, that I should be supporting my own, no matter the circumstance.

We really are living in the Upside Down.

Nora Roberts that reached out to Tomi herself didn't make as much noise or put down Tomi's work the way you people are doing, na wa. She made a PR mistake and now her book wasn't even that good ?

Nora Roberts is writing a series. The books were probably named before you got your publishing contract, madam.

Apparently, after the topic became hot on social media, Nora Roberts reached out to Tomi to clear the air, she didn’t know of Tomi’s book title.

Nora also addressed the issue in an article she published yesterday. Read it here.

On Wednesday during a protest in Abuja against the interference of the Nigerian Police Force (NPF) in politics, political activist Deji Adeyanju alongside two others — Daniel Abobama and Boma Williams — were arrested by the police.

Deji Adeyanju was arrested today while leading a protest to demand the neutrality of @PoliceNG in the forthcoming election.

He has been arraigned in court on allegations of criminal defamation and breach of public peace. #FreeDejiNow pic.twitter.com/eLqQssxRSH

According to the police, here’s why

He stood for the common man and woman. He stood against injustice, human rights violation and abuse of office.

It is time to stand with Deji.

The @PoliceNG arrested @adeyanjudeji and two other persons this morning for protesting against Police involvement in politics, I learnt they are planning to charge him to court, I wonder what the charge will me. This is what democracy has reduced to under Buhari. #FreeDejiNow

The @PoliceNG arrested @adeyanjudeji because he convened a peaceful protest in Abuja. The IG is taking his disregard for the rule of law too far. It's important to #FreeDejiNow #FreeDejiAdeyanju

Dear @MBuhari I am tagging you so you do not say that you did not know…
Please advice @PoliceNG to #FreeDejiNow
All Nigerians have a right to protest!
As Guaranteed under the constitution.@segalink @AbdulMahmud01

I've spoken with Area Father and the Lawyer handling Deji's case. Deji has been moved from Wuse Zone 2 Magistrate to Karshi Magistrate as the Police continue to execute their plan to ensure he sleeps in detention. #FreeDejiNow

I sent two persons to court to see what happen at court, if the court refuse to free @adeyanjudeji today, I will send two SAN there tomorrow on my expenses.
I urge @PoliceNG to #freeDejinow.@segalink @atiku @OfficialPDPNig

Deji Adeyanju has been granted bail.

Condition:
One surety
– Level 14 Civil Servant
or
– A Business Man with N20m in his account. #FreeDejiNow #FreeDejiAdeyanju pic.twitter.com/fT586XnGBV

In a democracy, citizens should be allowed to protest and ventilate their views and grievances. Anything short of this is dictatorship. Full stop. #FreeDejiNow

The Buhari admin is sending a message; that if anyone dares protest, they will be shot by the military, or illegally arrested and detained.
The Nigerian Police must be reminded they work for the Nigerian people and not for Buhari. #FreeDejiNow

Deji Adeyanju have long waited to see this day where he would be arrested by the @PoliceNG so he could trend. Now that @adeyanjudeji has been allegedly arrested, you guys who usually like and retweet his falsehood should make him trend. Do not disappoint Deji.😁 #FreeDejiNow pic.twitter.com/LsIslFsIQB

Deji and the others will reportedly be remanded in prison custody in Nasarawa state till January 21, 2019. Read more reactions here.

On Monday, a Nigerian Twitter user tweeted about how her date ditched her with a ₦83,000 (about $228) bill.

Person wey dey find Wetin nobody else wan find, him eyes go see Wetin anybody else never see” As Na only you sabi chop 83k food. Play is the tape after they are done with you. https://t.co/WJ5ZpBCCeB

How can you go on a date with a man and eat 83k only you? These babes sef no de fear God.

How will you go out and eat 83k naira on another person's bill? Did you have visions of rapture??

Has got to be a lie

Anyway, I believe the 83k gist is a lie. It’s a format to get guys to send her money.

Many guys on twitter are running on low self esteem, I’m sure her DM is filled with those who want to send her a ‘token’.

Just heard that one girl ate 83k on a date with a man.

That amount is the cost of Expession of interest forms for KOWA, YPP, and many political parties.

Such gluttony constitutes more threat to our democracy than Buhari.

Just know the kind of people you go on dates with and most importantly respect yourself.

But I thought everyone was rich on this app? 83k and y'all shouting 😑

Manager: “so bought food of 83k and you’re telling me I should wait for your boyfriend to come back ?”

Her: He went to the toilet

The boy looking at the 83k Bae making unnecessary orders knowing he will soon run away. pic.twitter.com/HKtWpMptVu

My bank account after vomiting 83k for dinner. pic.twitter.com/U9fHKggR6g

For those that don’t believe the 83k bill is possible. pic.twitter.com/XlkGeSYsVb

83k on food? If it was me that a man takes out to eat 83k food, I will tell him "my crown, no don't waste money". Let me take 3k to the market, buy vegetables and make soup with correct meat and swallow. The remaining 80k we use it to buy house or car. This is how u build a man.

So a man abandoned a lady and ran away during a date simply because of 83K bill.
A criminal complaint should be filed against that man.
Wickedness.

83k Bae wrote a thread on the full gist the following day. Reads like a made-up story if you ask me but don’t take my word for it, read it here.

Yesterday, in the Iyana Ipaja area of Lagos state, Nigeria, a Lagos State Traffic Management (LASTMA) official was killed by an officer of the NPF Federal Special Anti-robbery Squad (FSARS).

We are deeply saddened to confirm the death of one of our gallant officers, Adeyemo Rotimi, who was murdered in cold blood by suspected FSARS operative while discharging his lawful duties at his point in Iyana Ipaja on the 28th of November, 2018. pic.twitter.com/LrArWhQo0j

An argument ensued and Olakunle reportedly shot Rotimi dead. In a twist of events, an angry mob was said to have mistaken the FSARS official for a armed robbery and beaten him to death.

The SARS officer that allegedly shot dead LASTMA official (Rotimi Adeyemo) at Iyana Ipaja, Lagos was beaten to stupor by irate mob at the scene. He also died while being rushed to the hospital.
Both corpses were deposited at Mainland General Hospital morgue, Lagos for autopsy.

So, a SARS police officer shot and killed a LASTMA officer in Lagos because he was stopped from driving against traffic by the LASTMA officer.

People gathered around, apprehended the SARS officer and beat him to death immediately.

So a lastma that works for the government was killed yesterday by Fsars that also work for the government. I don't care what happened but this is a shameful and disgraceful act. The Fsars should be found and dealt with. May the soul of the deceased rest in peace pic.twitter.com/x4Yy5eXH5I

I thought this #EndSars has ended, what is this one again; SASR shots LASTMA…..May his soul rest in peace pic.twitter.com/uHW8UPJpzf

You see the anarchy we are talking about? The SARS officer that killed a LASTMA officer was beaten to death. People are getting pushed to the wall.

When citizens start beating @PoliceNG officers to death, there is a PROBLEM