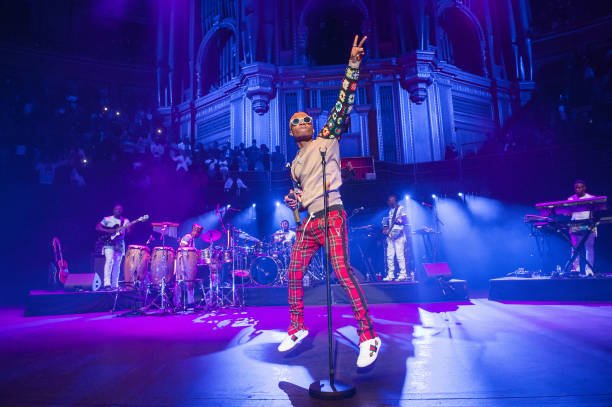 This week, Shola Ogudu, Wizkid’s baby mama broke the Internet when when she shared a rather heartbreaking story on her Instagram page. Read the lengthy story and chat screenshots here.

According to her story, Wizkid has been an absentee father to their 7-year old son Boluwatife, and a not so pleasant baby daddy to her.

If you cannnot read the full gist, someone made a Twitter thread highlighting the main points. Read it here.

Here’s an apt summary of the gist by the way;

Wizkid as an Artist vs Wizkid as a father according to Shola. pic.twitter.com/RVgbTJ2sAx

Wizkid needs to do better

Wizkid saying he can’t wait for the son to be 18 is funny, like you could absent in your boy’s life all through his formative years and turn up 18years later and expect him to have a relationship with you? It’s not an electric bulb switch .

At the end of the day. Bants aside. I hope we all agree that Wizkid needs to do better.

Shola has some learning to do too

Like this guy doesn’t care about you. What are you checking up on him for? Ignore him.

“Tife, your daddy is dead” is not hard like that. 😑

When your answer should be ‘You must be lost’

Bolu: "Mummy, where is my daddy"

Shola Ogudu said she had had Wizkid's female friends walk up to her to tell her how Wizkid would ask Tife to touch his friends' boobs and ass , so as to sure he is not gay.

Is Wizkid not mad?

Poor Tife though. He’s the biggest victim in all of this. The constant disappointment then turning on tv and seeing your dad everywhere with your new sibling.

We always expect these

Davido loves mayorkun more than wizkid loves his own child 😂😂😂.

Davido went as far as kidnapping his baby just to show you how much he wanted to be in his child life. 😂

Shola: Why are you here? Where's Gbenga?

Wizkid: I came myself to pick up my son.

Wizkid: Hello Shola, can I talk to Tife?

Bants aside, IF (emphasis on IF) Wizkid pays his child school fees, looks after him appropriately, invests his time and what not, but doesn't want anything to do with Shola, I think that is absolutely fine. You can't force yourself on someone who doesn't want you.

Nigeria Air has been suspended

About two months after unveiling Nigeria Air, the Nigerian Minister of Aviation Hadi Sirika took to Twitter on Wednesday this week to announce the suspension of the national carrier.

I regret to announce that the Federal Executive Council has taken the tough decision to suspend the National Carrier Project in the interim. All commitments due will be honoured. We thank the public for the support as always.🙏🏾🙏🏾🙏🏾🇳🇬🇳🇬🇳🇬

How Nigerians reacted on social media;

Fact is #NigeriaAir never existed, it was a scam.
Apart from the logo that was designed in Bahrain, let them show Nigerians any other thing about it.
N1.5bn cool cash in their accounts.
Chai!

What a Monumental waste!

We must not allow the lifeless drag us to limbo.

The whole #NigeriaAir nonsense was just a political stunt and an ego ride.@segalink @adeyanjudeji @BudgITng

All Ye Prayer Warriors, I Told You So. N1.5Billion consulting fees gone down the drain! #NigeriaAir

I was really hoping #NigeriaAir was gonna work. But as usual corruption and incompetence won.

Imagine all the adults who defended the non existent #NigeriaAir.

This govt has a way of making its supporters look stupid…

Someone should resign or be sacked for this #NigeriaAir fiasco! Probably the Aviation Minister. Really sad & embarrassing ☹️

Apologies are in order

You see 🇳🇬 is that friend you really can't trust not to embarrass you after you have sworn for the 100th time he or she will be of good behaviour.

@APCNigeria @NGRPresident all Buharists/Buharideens and #BMC should without delay issue an apology to @obyezeks on the suspension of the much vamped #NigeriaAir. She has been vindicated.

On #NigeriaAir 'suspension' by FG, anyone that insulted @obyezeks then, must apologise to her.

Some people are optimistic

I was utterly shocked about the suspension of #NigeriaAir, but I commend the sincerity of Buhari's Govt for not keeping the populace in the dark. This is a mark of integrity and a difference between this Govt and previous Govts. I hope the Govt will come back with the best plan.

Will we be happy if FG has gone ahead with #NigeriaAir and it flops? Some folks here will roll out drums to celebrate if that happens just as they killed Nigeria Airways. Baba @MBuhari saw their plans and re strategized. #leadership

I am still for a National carrier.@hadisirika @MBuhari go back to the drawing board and fix the hindrances.

I have absolutely NO REGRETS believing and praying for #NigeriaAir. Whether it materializes later or never, I won't stop being optimistic and hoping that it, like any other Nigeria project, succeeds. And, prayers are never meant to substitute required works.

Someone just said "maybe GEJ should have started it so they complete it" jeez! #NigeriaAir pic.twitter.com/T3DElrpuB3

#PMB supporters on twitter:
when Nigeria Air logo was launched
vs
when the #NigeriaAir logo was suspended pic.twitter.com/fOjHJfMEOa

Before the minister’s announcement, we published a story on the imminent demise of Nigeria Air based on budgetary allocations dating back to 2016, read it here.

Meanwhile in South Africa, pro-marijauna activists were celebrating following the legalisation of growing weed for private consumption. Just so you know, “Dagga” is a South African word for weed.

South Africa's constitutional court has ruled that the private use of marijuana/weed/dagga (list is endless) is legal.
South Africans will now be able to legally smoke/ grow cannabis at home.
https://t.co/wgdRIkN9gU

Government wishes to emphasise that the sale of #Dagga is still illegal in SA. South Africans are reminded that substance abuse is dangerous & harmful to their health.

We ain't heard the last of this here #dagga business…😎 pic.twitter.com/QAm2ltrXRx

let's not forget this soldier in today's victory…for #Dagga 😂😂😂😂😂 pic.twitter.com/7qpc7ztv1F

So the police weed sniffer dogs are now unemployed?🤔

I don't know if it's me only or because I don't smoke, but this Weed issue is just not it #dagga we should be focusing on improving our economy and getting it back in track but instead we focus on some other things.

Come to think of it so now it's legal to go to the police station and lay a charge that someone stole your weed…🤔🤔🤔#Dagga pic.twitter.com/vCE94YTp5Z

I don't care what court said: DAGGA CAUSES PSYCHOSIS. IYAHLANYISA. Dagga is an entry point for other hardcore drugs. I have diagnosed them gazillion times.

Davido campaigning for his uncle

Asides trending for supposedly being a better father than Wizkid, Davido was a topic on social media this week for campaigning for his uncle Senator Ademola Adeleke (AKA The Dancing Senator) who is a candidate for the upcoming Osun state gubernatorial election.

Osogbo Mega rally today !! @IsiakaAdeleke1 victory awaits You and the Beautiful People of the state of Osun ! 🇳🇬🎉🌍⭐️🎊❤️ pic.twitter.com/hKxmSeAaJW

Davido is destined to become the youngest Governor of Osun State at some point. NYSC getting locked in. Already on the campaign trail, familiarizing himself with the people & the process. Family building a political legacy in the state.

It’s only a matter of time.

Davido is using his fame to dedicatedly support his uncle's Governorship ambition. He's working so hard for his campaign even more than his kids (who are also helping out). This is so admirable. It's so important to be supportive. pic.twitter.com/eceVPNyvrT

One thing is sure…Davido will not be performing at any Aso Rock event in the near or foreseeable future.

Davido really metamorphosed into a grown man in the last 2 years. Keeping a relationship, being there for his kids, getting involved politically. A king.

Davido will be singing, his uncle will be twerking by the side…. maad

There’s some scandal surrounding Senator Adeleke’s candidacy, read all about it here.

This week, recurrent Lagos state gubernatorial candidate Jimi Agbaje announced that he’ll be running for the governorship position in the state come 2019.

Why are we just hearing from him though?

Even Ngozi sef is positioning for what is to come. Jimi Agbaje went to hide. https://t.co/XMWCk8TLW3

Someone needs to remind Jimi Agbaje that this method of waking up a few months to every election year and then announcing to run is a time-tested guaranteed way to lose the election.

You can’t practically be in political oblivion for 3 years and just assume you remain relevant.

As I saw Jimi Agbaje trending yh, the first thing that came to my mind was ''Everybody loves Jimi Agbaje ''💃💃🎶💃

"Everybody loves Jimi Agbaje"…. What's up with this guy?! Why does he always show up so late?! Why? https://t.co/5LmHD5s7TH

To be honest, I don’t think Lagosians are worth the trouble. The kinds of people who Jimi Agbaje appeals to won’t go and vote, they’ll stay home and say it’s stressful and dangerous. Whereas the people who sell their votes for 1k will stay at the polling unit from 8 till 6pm. https://t.co/A7mgdZSAHU

'Jimi Agbaje only shows his face a few months before election'.

Madam Shonaiya of KOWA has bn around ever since the last elections and has commented on almost every National Development as they have arisen.

Are you going to vote her?

Things are about to get really interesting in Lagos politics.