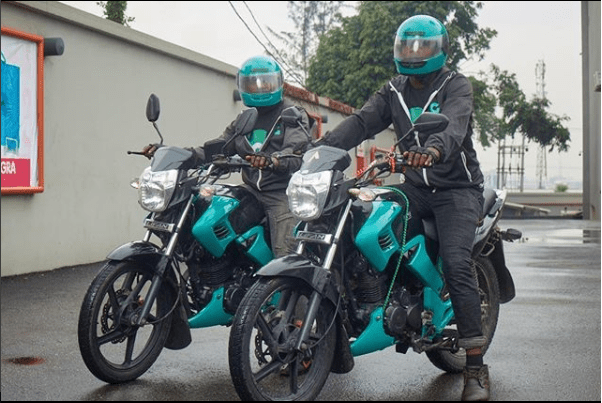 On a breezy Friday afternoon, the rain threatens and yet a small party of mismatched people; techies, business, media and everybody else is gathered for Gokada, an on-demand motorbike hailing service in Lagos Nigeria.

Cross section of attendees at the Gokada party

It is the launch party of Gokada’s new mobile app and the party is behind an upscale burger place in the Ikeja environs of Lagos State.

Music, booze and fancy hookah bottles; the evening is on a high and ex-Big Brother Naija (BBN) housemate and star Tobi Bakre is the celebrity guest.

“When they called me here, I thought it was just another job. But after personal research, I am amazed by what this company is doing and how far they have come,” Tobi says to a steady clapping audience.

Aren’t you still saying what you are paid to say? I wonder from where I sit.

But maybe he has a point. In June 2017, when Nigeria’s first on-demand motorbike hailing service launched it opened the vista for a world of opportunities in the sector especially in Lagos. Gokada followed in January 2018.

With over 24 million people crammed in a tiny land area, Lagos State is the most populated in Nigeria and is ironically situated on the smallest state land mass. This means the debilitating traffic congestions in the state are the stuff of legends.

Motorcycles — or okadas as they are popularly called — have always been the most efficient means of transportation to navigate the city.

In the months following its launch, Gokada has exploded on Lagos roads; everywhere there seems to be a green helmet or two bobbing on a 200cc motorbike.

According to (former) Gokada CEO, Deji Oduntan, “We haven’t even started yet. Gokada is going to be literally all over Lagos.”

How were they even able to expand so fast in such short time?

An idea, spiced with data

Gokada launched with 100 bikes and worked their way up.

“We wanted to understand and gain insight into how to properly run a ridesharing business and figure out overlooked essentials like driver economics and financial models,“Deji says.

With this knowledge, data also came into play. From ride requests to cancellations, Deji says the company has been able to leverage this data to find trends and make smart predictions.

“We are a technology company so everything we do is monitored and studied. It helps to know things like where riders are needed, potential expansion areas and areas of passenger concentration.”

After the first phase, the company took on financial partners who paid for bikes on the platform and are still invested in the business.

MAX Go was the first to launch on-demand motorcycle hailing in Nigeria so it only makes sense they’re Gokada’s competition. But surprisingly, Deji doesn’t think they’re exactly competition per se.

“I see MAX [Go] more as counterparts than competitors. The industry is nascent and one or even two players are not enough to position it properly. So for now our efforts are complimentary. I believe we spurred their rebranding to a very large extent and they too are helping keep us on our toes.”

Gokada is currently not profitable but doesn’t plan to stay that way for very long. According to Deji,

“We just launched in January and that’s really the only reason we are not yet turning profits. We don’t want to run unprofitable for a very long time like the typical ride hailing platforms.”

A ride from the main gates of the University of Lagos (UNILAG) to the present Techpoint office costs about ₦200. This is nearly 40% less than what normal commercial motorcyclists charge for the same distance.

So Gokada is currently cheap, if it stays that way the profitability race may be longer than Deji claims. But he says the company reviews prices.

“At every point, we aim to be the most affordable so fares are always subject to review from customer feedback and market prices.”

In Lagos, over the years the lawlessness of commercial motorcyclists and nefarious activities of criminals masquerading as them has necessitated restrictive government regulations.  But Gokada has an edge; ‘proper branding, rider and passenger insurance, and responsible drivers’.

“Yes, these rules and laws can be restrictive, but there’s a reason they existed in the first place and we try to make sure those concerns are taken care of,” Deji says.

After scaling its operations around Lagos, the company wants to expand to states where the market demand is strongest. And there’s some pretty ambitious plans in the offing.

“In 5 years, Gokada will be the one-stop shop for the Nigerian consumer. Because we will be solving multiple problems once we have thousands of bikes on the road. With that kind of reach, we will be able to fix delivery and logistics, and of course transportation,” Deji Oduntan concludes.

With its technology twist; Uber-like appendages, motorcycle on demand can truly become the next big thing for transportation in Nigeria’s metropolitan cities.