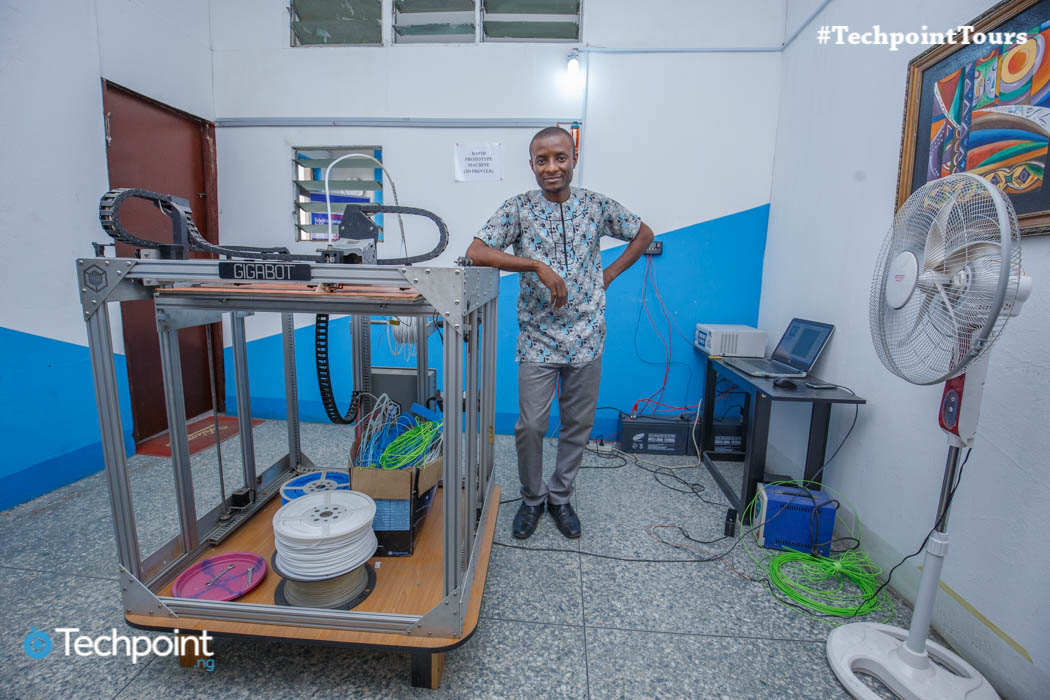 In a classroom at the Electronic Engineering Department of the University of Nigeria Nsukka (UNN), a lecturer teaching the theories and principles of engineering mentioned an equation and its constituent constant. A curious student wanted to know the value of that constant and how it applied in real life, he wasn’t ready for the answer. “In Nigeria you won’t need that knowledge, you don’t use it. So we just show you the formula and you’re good to go.”

That student was Tochukwu Clinton Chukwueke, engineer, inventor and founder of Clintonel Innovation Centre (CIC) and Clintonel Technologies, based in Aba, Abia state.

Because a professor that schooled abroad had this mindset, that moment brought Clinton’s faith in the Nigerian educational system down a notch.

Regardless of the unsatisfactory Nigerian educational system, before graduating university, Clinton went ahead to file three patents which included a water and steam hybrid engine, and a simple reading stand.

“During my undergraduate years, I worked very hard to develop a water powered engine and discovered a new process which I proceeded to patent,” he says.

In the process of building his machine, Clinton discovered an age old truth; hardware is hard, especially in Nigeria.

The hard thing about hardware in Nigeria

After graduation in 2011, he went into production of one of his patents; the Clintonel Reading Stand. As the name implies, the stand holds books up and prevents the reader from straining their neck. It is equipped with battery powered lights and a page belt.

He faced some challenges that howbeit shocking, are not new to innovators, scientists and engineers in Nigeria.

Three hundred thousand naira saved up from NYSC allowances, with investment from a friend, was paid to a ‘highly recommended’ manufacturer in Aba for the reading stand’s production cast and mold.

He promised to deliver in exactly 3 months, but 1 year, more money and a lawyer’s intervention later, I got an unworkable caricature of what was originally paid for.

When shown the Reading Stand’s designs, a Director at the Metallurgical Research and Material Institute in Onitsha Anambra State was shocked and asked Clinton if he didn’t know he was in Nigeria.

First from my lecturer, now this man. Being Nigerian shouldn’t inhibit us from thinking, designing and creating, but that is the sad reality we are working uphill against.

All these frustrations led to the creation of Clintonel Technologies and the Clintonel Innovation Centre.

Clintonel Technology is a company that develops, manufactures and commercialises local innovations while the Clintonel Innovation Center(CIC) is its social enterprise and youth development arm. CIC is a solar-powered youth development center where youths in Abia State and environs are equipped with skills for technological development, innovation, STEM, career excellence and job creation. Its vision is to raise a new generation of scientists, inventors, technology developers that will harness technological innovations for collective prosperity.

Apart from training future engineers and inventors, school students come in here for excursions. For most of them, CIC will be there first real life exposure to tech tools, machines and innovations like the 3D printer and all its appurtenances.

CIC houses a giant Gigabot GB3 3D printer and products from this hardware ‘photocopier’ are evidence of its operator’s ingenuity. Apart from the magnificence of the 3D printer and its creations, there is a filament magic Clinton has conjured.

To 3D printers, filaments are what ink is to traditional paper based printers. These printer filaments are expensive and not produced in Nigeria.

Because of large volumes of 3D printing jobs that had to be done on a daily basis, Clinton says at some point it no longer made economic sense to buy 3D printer filaments so he decided to build a printer filament producing machine. That was how the Filament Extrusion Machine and Spooling Machine were born.

The Filament Extrusion Machine is a scaled down model of the industrial plastic extrusion machine that is used to mold plastic products. Built from the combination of a car wipers’ drive system, heating rings, cooling fans and other machine parts, the mechanism is similar to the manual kitchen hand grinder that extrudes materials on one end as it turns.

There’s a speed controller, monitor and switch to regulate the in and outflow of heat and materials as heat and speed are major determinants of filament diameter in 3D printing.

When the Extrusion Machine produces enough filament, instead of letting them curl on the ground or manually winding up, it is automatically wound up into a tight spool on the Spooling Machine.

How filaments were manually curled before the Automatic Spooling Machine

Sensors underneath the machines synchronise the motions of the two machines to move in tandem. This regulates speed and ensures the extruder does not produce more filaments than the spooler can curl at one time.

A tightly wound spool wheel from the Automatic Spooling Machine

Clinton designed and built all of this himself.

For the filament extrusion machine,  I got the idea on Instructables. There was an existing model that will fill up a room so I took the idea, scaled it down by nearly a hundred times to a more efficient model working with locally sourced material and materials printed from the 3D printer. At first it was hard, but this is the 3rd version, it is close to perfect and better than the original idea. But the automatic spooling machine was all my conception and design,the wheels were printed from the 3D printer here” Clinton replies to how he got the idea for the machines.

All these inventions are open source and have been put back on the internet for the free use of inventors and makers.

Considering the effort, hard work and ingenuity that went into these machines, Clinton could have patented them and made a truckload of money. Instead, he has shared this design with an open source makers community at Instructable to be used free of charge. Why?

It feels good to see people from around the world working with and making good use of your designs.

Like every other hardware enthusiast and practitioner in Nigeria, Clinton points out the nonchalance and neglected role of the Nigerian government in the development of hardware in Nigeria. He points out shocking instances to buttress this point.

In my 4th year in UNN, I sought help at the Centre for Energy Research and Development UNN to make prototypes of a small water pump for my water powered engine. They [at the centre] were all impressed but couldn’t help.

According to Clinton, the director there at the time told him they didn’t have funding for research and development for innovation.

He said the funding they got was for administrative purposes and this was obvious in the shiny new office buildings springing up everywhere in the complex and I wondered what the essence was. These monies could be channeled  to fund innovations they’re supposed to be for. I didn’t believe him so I went to Abuja.

In Abuja, he got the same surprisingly shocking and sad response.

The educational system by itself is supposed to be a bedrock of innovations and engineering excellence, but that is not the case and has never been.

I nearly dropped out in my final year because I got frustrated at the amount of theory that was being shoved in our faces. I didn’t get most of my practical  engineering knowledge from school, most of it was self taught. Thank God for the internet that is a sort of equaliser and gives you access to probably the same kind of knowledge that other people consume globally. I did a lot of research on the internet, bought books like Production Technology which I still own till date and is here.

“And most importantly, I have to acknowledge that being at the GE Lagos Garage was a very helpful experience for me. It was there I first interfaced with advanced manufacturing machines and technology like 3D printing and Computer Numerical Control(CNC) machining,” he continues.

According to Clinton, even the supposedly straight forward process of obtaining patents is tedium.

Usually the process is supposed to take a few weeks after submission of application to the patent office under the Ministry of Trade and Investment but the Nigerian factor has marred the process. Civil servants at the patent office demand bribes are demanded and if you don’t pay them, they intentionally sabotage your application.

Clinton tells the story of an inventor friend of his that applied for a patent five years ago. After reviewing the application, the officers demanded an agency fee to represent the said applicant. For daring to speak up and refuse their outrageous and unethical demand, Clinton says that patent was never filed.

Clinton has a dream that one day Nigeria will be technologically self-sufficient.

Most innovations in Nigeria today — from complex machines to downright simple technologies — are foreign and imported. It gives a wrong impression that we as a people are inferior and cannot think. My dream is to have a Nigeria that produces and exports technology to the world.

Clintonel Technologies  wants to build consumer technology from Nigeria that meets global standards. But some Nigerians still think made in Nigeria products are inferior to their foreign counterparts, how does Clintonel plan to overcome this barrier?

Clinton points out Cutix cables which are made in Nigeria and nearly two times more expensive than most imported variety, yet still preferred by Nigerians.

“Create a quality standard and put word out people will buy no matter where it is from. If you create technology and innovation specifically targeted at Nigerians, they won’t have any option but to buy,” Clinton says.

I’m not a politician and may never be able to contribute to national development through a political office, I’m into tech and that is my tool to make Nigeria better. My ultimate goal is to have made in Nigeria technology and inventions on sale and in high demand abroad.

Tochukwu Clinton Chukwueke self-identifies as an  ‘Inventor, Industrialist, [and] Change Agent’. Only time will tell if this young innovator can truly change the hardware culture in Nigeria from his corner in Aba.