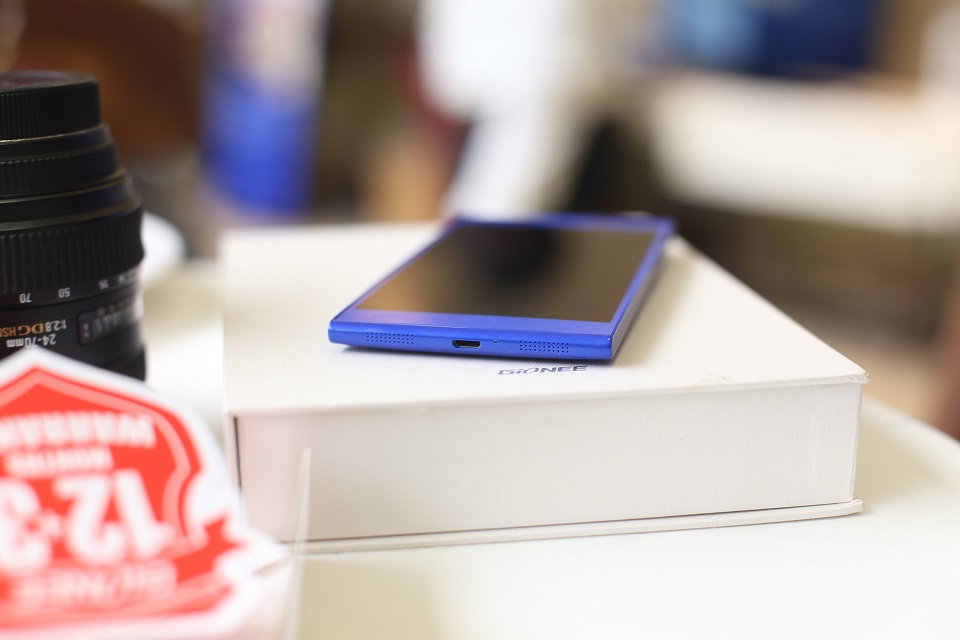 Specheads can view the full specsheet for the Gionee Elife E7 here.

For all these high end specs how much do you think the Gionee Elife E7 would retail for? Continue reading to find out the price.

What’s in the Box?

Some of the usual stuff like the charger, the earpiece, the manual and sim tray pin.

There’s also bundled a flip cover phone case, screen protector, USB OTG (on-the-go) cable, a couple of NFC tags and one other weird looking thing which is apparently a stand for the phone

Just in case acronyms like “OTG” and “NFC” sound weird to you – NFC is like Bluetooth on steroids, while OTG is a feature that basically allows you to plug in a flash drive, and access files from it, directly on your phone. Well, it’s a lot more than. You’ll find out more in our subsequent reviews.

The Gionee Elife E7 features a special customization of the Android interface called Amigo UI 2.0. While I have my reservations about the absence of an app drawer, I think Amigo UI is refreshing and exciting. There’s nifty animations at every corner and things popping out here and there.

I’m particularly impressed by how multi-tasking is handled. When you press the home button once, rather than take you straight to the homescreen, it takes you to a screen of recent apps, which I think makes sense because, more than half the time, you really just want to switch apps quickly.

I’ll go into better detail on the UI later in my full review.

Appears okay so far. I’ve only had the Gionee Elife E7 for a few days so, I wouldn’t say I have used the device to its limit. But so far, on average use, the bundled 2500 mAh battery appears to be holding its own against all those high end specs.

That’s right, if you buy the Gionee Elife E7 via Konga.com, you get it for the exclusive online price of N53,448, complete with 15 months warranty.

Watch this space for our full review of the Gionee Elife E7.