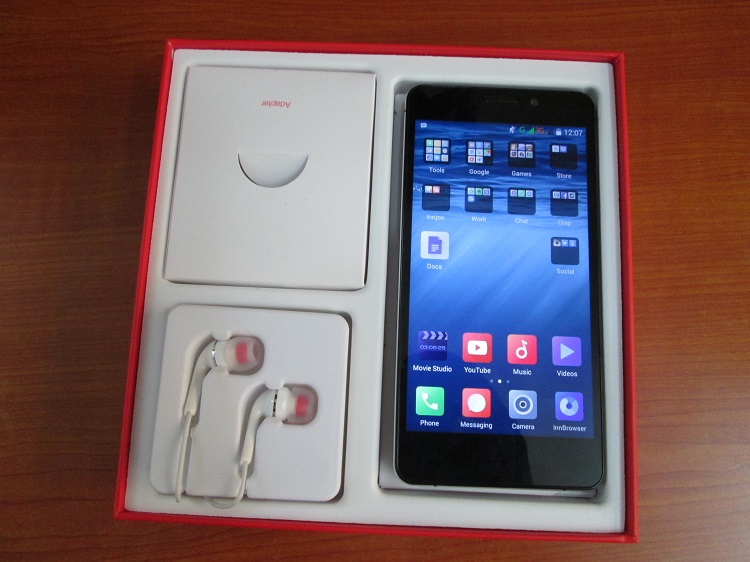 Last year saw the introduction of two ultra cheap Android devices, from Dubai-based Innjoo Mobility, into the Nigerian market — the Innjoo i1s and Innjoo i2. They were instant hits, many thanks to the below 20k price mark, which the company achieved by striking exclusive online-only deals with Jumia.

Based on that success, Innjoo Mobility has decided to take the market even more seriously by officially launching a flagship for the first time ever in Nigeria. The Innjoo One is an Android KitKat 4.4 phone spotting a 13MP primary camera and 5MP front, with 2GB RAM, 16GB internal memory and a 1.4 GHz octa-core processor.

Techpoint received a review unit ahead of the launch event on Wednesday. Here are my first impressions of the device.

The Innjoo One is 6.9mm thin, weighs only 123 g and with its full metal body frame, has all the makings of a high end phone. In fact it looks like a bigger, slimmer version of the iPhone 5s, only it’s way cheaper.

Similarities are not limited to the body. You’ll also find them in the UI…

Why no app drawer?

Apple fans will love this but it’s very alien to Android faithfuls like myself — the Innjoo UI has got no app drawer. You know, that very useful interface where you can view all your installed apps. It’s gone. Shortcuts are gone too.What you have instead is home screens, app icons and folders. Yep, just like on the iPhone.

Bear in mind these are app icons, not shortcuts so, pressing and holding actually unintsalls an app, rather than delete its shortcut from the homescreen. So if you are an app junkie, what you end up with is a complete mess of icons on your third homescreen. If you want any level of sanity, you have to utilize folders extensively.

It’s not exactly Dual-SIM per se…

The Innjoo one comes with a non-removable battery so there’s no space at the back of the phone to insert SIMs. What you’ll find instead is two SIM tray entries to the side.

I imagine this arrangement is unfavourable for memory space junkies who might want both dual SIM and expandable memory at the same time.

I’m quite impressed with the Innjoo One’s crisp display. Perhaps this has a lot to do with the Dragontrail Glass (no, not Corning Gorilla) display. Even under direct sunlight, I find that I’m able to get by comfortably with around 30% brightness. Th

I mentioned earlier that the Innjoo One runs on a 1.4 GHz 8-core processor. I am yet to put those 8 cores to their full use because I’ve basically been running on ‘CPU power saving mode’ since I got the device. But that hasn’t stopped me from playing Spiderman Unlimited and Hitman Go totally free of lag.

And it works. I managed to get 6 hours of intensive (mobile data on, about an hour of gaming with sound, lots of downloading and over 30 minutes GPS navigating) use out the small 2600 mAh before it dropped to 10%. Considering I’m not much of a gamer, I can already tell I will be using the phone permanently in CPU saving mode.

I’m hoping this is isolated to our review unit. For some reason, the touchscreen tends to be randomly oversensitive. It doesn’t happen all the time but when it does, the best thing is to turn of the display and put down the phone for a few minutes.

But that’s not nearly half as annoying as the fact that I can’t use the ‘p’ button on the keyboard. I’ve tried changing keyboards but I still get the same result. For some reason, that particular spot on the screen is rendered inactive. Again, it could be an isolated issue. I’ve reached out to Innjoo for comment. In the meantime, watch this space for the full review.

This device should be called “I want to be an Iphone”.

Looooo, I want to be an iPhone. Very catchy

You guys should make an unboxing video for the innjoo One. There is none on YouTube!

Thanks for the suggestion Ekpenyong, we’ll look into it.

Dear Muyiwa, you’re a life safer! If you know the headache I had with
the nano SIM slot! I did some surgery, trying to get my SIM into a sd
card shape… Went to GLO to get a nano SIM (they’re even giving it out
free but I bought airtime though) that seemed too small for the slot.
But when I wasn’t making much progress, I googled and saw this post
through InnJoo forum. The last picture (MTN SIM) above was the saviour… Thanks, thanks, thanks! But come oh, maybe it’s even in the phone manual!

You’re welcome Kayode. Glad we could be of help. Wait, the phone has a manual? Em….