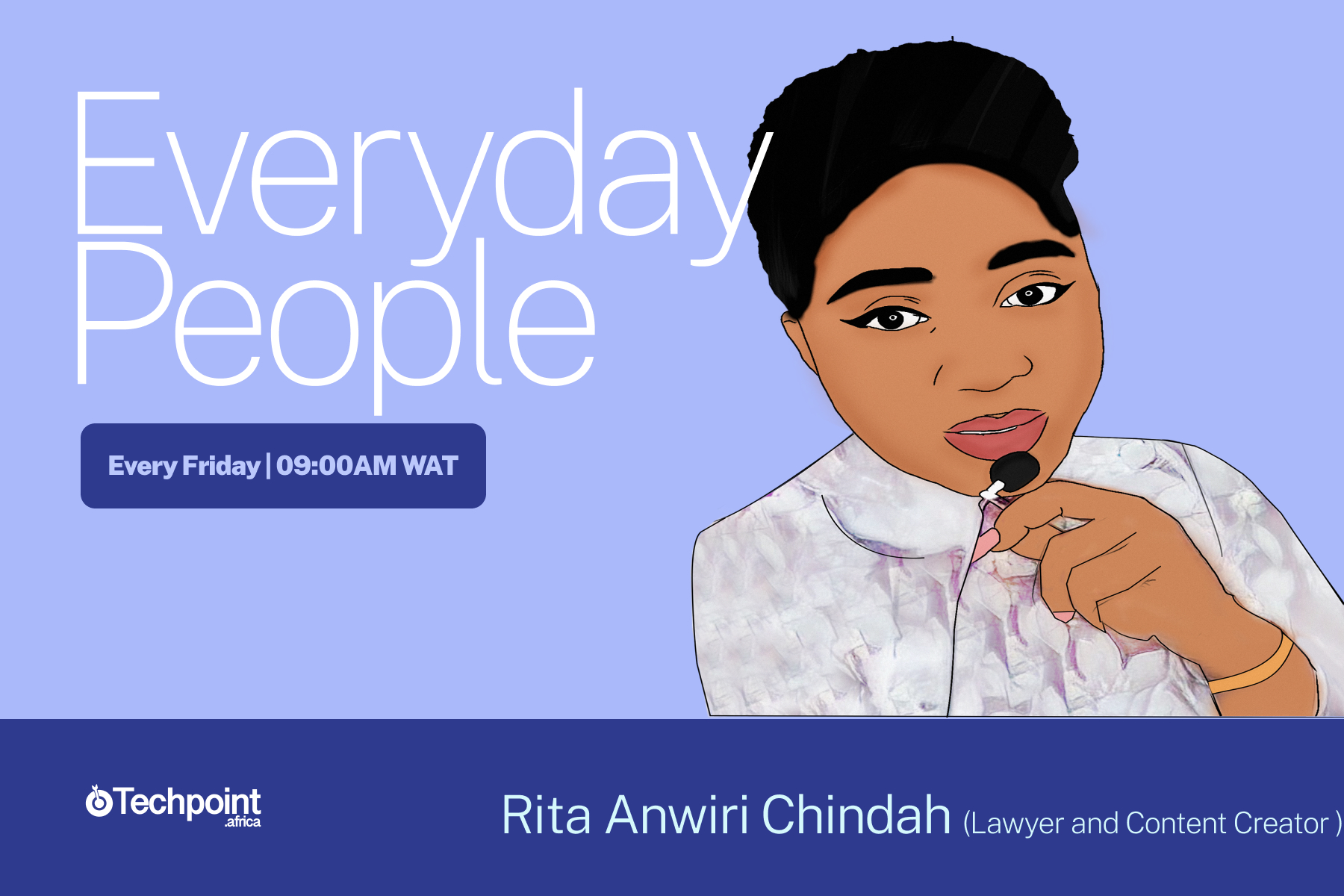 Today on Everyday People, we meet Rita Anwiri Chindah, an intellectual property and information technology lawyer and an arbitrator based in Port-Harcourt, Rivers State. A random decision at the university led her down a path that would eventually turn her into an educationist. Now she hosts the IPSERIES podcast, a mini blog series on Twitter, and publishes a Substack newsletter to educate people on how much intellectual property is a part of all we do.

I published my first [IPSERIES] episode on May 18, 2020. I think I had about 65 plays in how many days, but the feedback I kept getting from people was that I was sniffing and truthfully I was sniffing because I have allergies.

I started getting comments from people on how to record. Someone suggested I should record in a quiet place. So sometimes when I want to record, I have to tell my family, cause I stay with my parents.

I tell them, “I’m recording today. Please, can you guys, you know, tone down the noise,” and they do that.

Then someone else suggested, “Why don’t you get a mic?”

And I was like, “Where am I going to get a mic?” I tried to get one from Jumia, and when they did not deliver after one month, they said I should go to the nearest post office.

I went there the first time and they said, “Okay, maybe come back next week.”

And I went back the following week.

They said, “Ah, Madam, we never receive anything [we haven’t received anything].”

So I think I sent an email or I called. And they said if I couldn’t wait, I should cancel the order.

I was like, “After waiting this long, are you people joking?” I had had enough. Like, seriously, why are we not moving forward? Why do we always look for ways to frustrate people?

Then this year, I think I saw someone on Instagram selling a mic, and I was like, “Okay, let me try her,” and I bought it, and it was excellent.

I just decided to do the random one I’d never heard of.

IP education for me started when I was at Infusion Lawyers. Senator Ihenyen, my boss at the time, and I had this conversation about IP awareness and educating people. And then, the firm came up with a Frequently Asked Question blog called IP ABC.

That was where the interest started to build up. Then I started dropping IP bits on Twitter and tagged it IPSERIES. I’m not sure if that was the first major case I analysed. It wasn’t much of a case, but I saw someone post something that I felt was untrue because Deola Sage put up a notification saying her Komole design had been registered as a design under the Nigerian Design Act.

Someone said she didn’t have the right to do that, “How can you protect aso oke [traditional Yoruba fabric]?”

I thought about it and concluded it was not ordinary aso oke. So I sat down and compared the original Yoruba aso oke and Deola Sage’s Komole [Kandids].

I did that tweet, and people received it well, so I started building on that.

Then during the pandemic, LolA With The Duffle Bag on Twitter shared a link to her podcast and said that she uses Anchor to do her recording.

So I checked it out, and when I realised it was very easy to record and share, I decided to try doing a podcast.

After the podcast, I began considering a newsletter. Telema Davis, one of my friends who always pushes me to do more, told me to do it if I wanted to. Expectedly, he edited my first newsletter publication.

I didn’t know which platform to publish on, and he suggested Substack? So I got my Substack account. So far, I have 66 or 67 podcast episodes, 12 newsletters, and over one hundred mini blog series on Twitter.

Someone who has listened to all my podcasts suggested I put my microphone in a pillowcase and, you know, talk into it, and the background sound would be muffled.

So I’ve done all those things just to make sure that I put out good quality content.

Sometimes it’s not easy staying consistent; it’s a bit overwhelming because each content must have a different storyline. So it doesn’t seem like you’re just copying, pasting, and resharing.

Content is key, and everything is content. When you’re just starting, you don’t get likes or retweets, and at such times, you wonder if you’re making sense. But once you keep at it, people get to know and interact with you.

Walking through the process

First up for me is usually the research, where I have to study the case and look out for things people didn’t notice while reading or talking about the case because I’m giving a Nigerian/African perspective. So I also have to read and compare many documents and conversations.

The next step is structure. How do you want the story to flow? Are you going to tell a very witty story? I write and then type because I’m used to capturing my thought processes on paper first. As I type, I figure out what is relevant and what to discard.

Once I’m done with research and typing for the Twitter series, I start posting. Sometimes I try to throw in pictures to help people better understand the conversation.

Sometimes, depending on how complex it is, I decide to have a guest on my podcast. I remember we had this Tracy Chapman and Nicki Minaj case when I started, and I was wondering how to discuss it. So I reached out to Mark Jaffe, a colleague and friend who is more into copyrights. Interestingly, this connection was not physical, and that is the beauty of the Intenet — it is easy to connect with people.

I’ve noticed that foreigners always want to help, so I was not surprised when he asked what I needed. We had a very interesting conversation and he said he was willing to come back and talk about something else if I needed him to.

It’s not easy, especially with network issues; I once went in and out of a session with a guest ten times.

“Look, I hope the last episode recorded?” he asked.

When I was listening to the recording, I did not hear anything that I said, I didn’t know what to do.

There was this time when it was a football matter and I wanted to interview two guests, but only one of them could log in. After many attempts, we cancelled and did not try to record afterwards; I felt bad because I was really looking forward to that conversation, which was going to shed light from the eSports sector to the regular sports sector

So while the Internet is good, the technical issues are not fun. It’s kind of embarrassing sometimes because you’re all hyped up. You have your router or your MiFi on standby. You have your mobile data, just in case. And before you know it, something unexpected happens. I sometimes ask myself why I am in Nigeria.

I was so upset once that I tagged Anchor on Twitter.

“Why are you guys doing this to me, today of all days? I can’t even log in. I can’t do anything.”

And I was like, “Oh gosh, the Internet again!”

The thing is you are trying to task yourself mentally while doing many things simultaneously, but people have no idea what goes into producing content. When you’re Googling and reading different documents, make sure give a brief summary of everything because that is really where the work is.