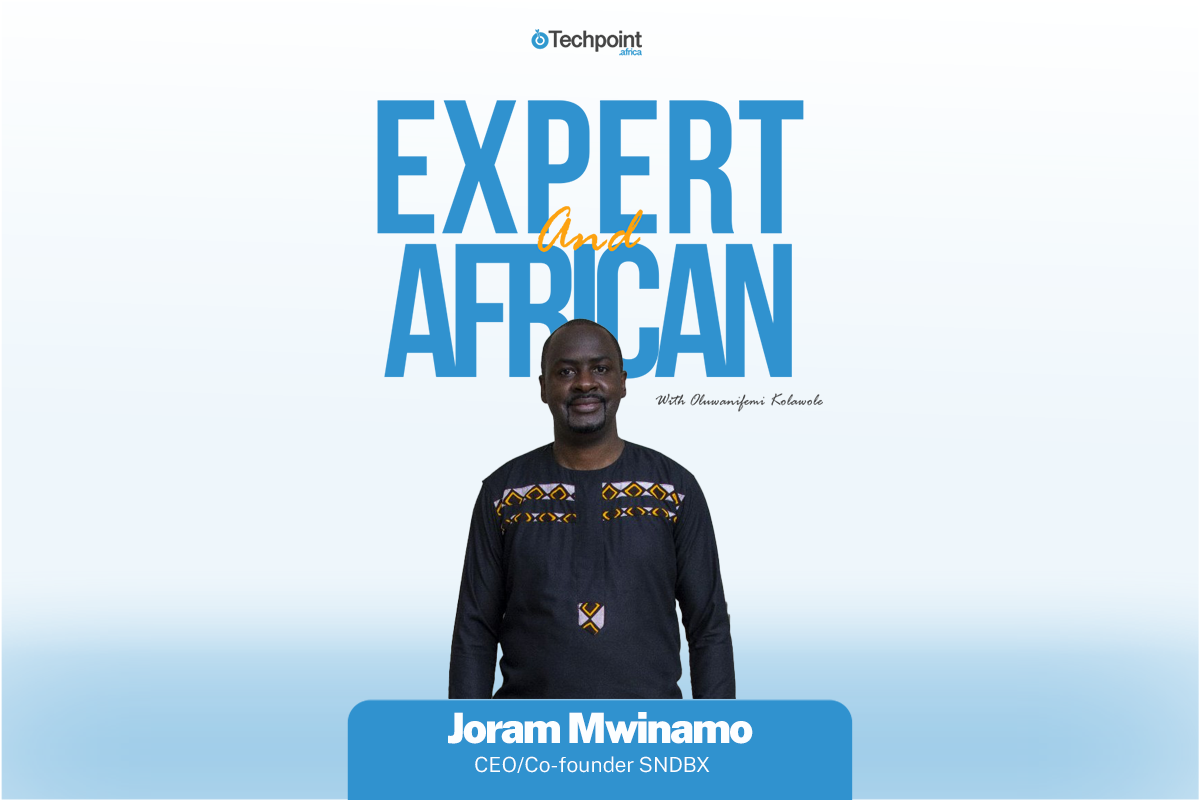 In California, it’s Silicon Valley. In Kenya, it’s Silicon Savannah. There are many Silicon Savannahs in Africa. Just think of major African cities with tech hubs, and you’re there. Interestingly, this article is about Joram Mwinamo, someone who is actively participating in the evolution of tech businesses in Kenya and has been part of the entrepreneurship ecosystem since 2007.

If you spend ten minutes with Joram, he’ll spend eight talking about tech’s potential and how he’s been helping businesses tap into it by helping them make sense of the problem from a human angle.

"Having that good understanding of human problems and being able to break them down, and then create solutions, and walk backwards to create technology to address the problems, based on the technology that you build, you find that now you're able to extract data, speed up certain processes, [and] have objective information."

Joram is a seasoned Kenyan entrepreneur who runs with a school of thought that if a founder is only good at building a product and terrible at everything else, it will affect the startup’s overall success.

"I'm probably one of those people, who, even when we have an extended technology discussion, I discuss more of the non-technology than the technology itself because I find that a lot of technologists look at the tools and solutions a bit too much. I come from a philosophy of looking at the real problems first and then seeing what kind of technology will be helpful in solving it."

It was around this that he created his lofty plan — building 5,000 consortiums across the world. Now, we have to answer a few questions: What drives Joram? What's unique about his approach? What's his background? How far has he come?

If you ask Joram about himself, 80% of the time, he's instinctively talking about how he has played and is still playing his part to support the Kenyan entrepreneurship ecosystem. But that is not all there is to know about him.

During our chat, he fondly remembered the small beginnings; however, he is proud of how far he has come. In a little over a decade, Kenya has become a hotspot for the big guns. The country’s capital, Nairobi, houses Microsoft’s first Africa Development Centre, Google’s proposed first Product Development Centre on the continent, and Amazon’s planned AWS Local Zone launch.

Growing up in a middle-class family in Nairobi, Joram studied computer science at Egerton university. This leaves one wondering why anyone would make such a decision in 2002 when the potential of tech and the importance of the Internet were not appreciated in Africa yet.

"I realise I was introduced to technology a bit early. Because of that experience, I did have some exposure to coding quite early and gotten comfortable with technology. Where my dad, in the work that he used to do, was a civil servant, but somehow he linked up with some South African consultancy, and as a result, we ended up with one or two computers at home, and one was like a mini-computer, and the other one was like one of those really early laptops. I remember tinkering around with it. This was maybe 1995/96."

As an undergraduate, his involvement with AIESEC paved the way. The organisation, which focuses on cultural exchange and professional and leadership development, allowed him to work outside his country for two years as a graduate: first in Uganda as a project manager and then in Norway.

"And then, when I came back to Kenya, I was still not clear whether I would continue being employed or run a business.”

It wasn't long before he knew what he wasn't interested in doing — being employed for a hardcore tech role. Together with a friend who had a similar tech background, Joram registered a management consulting company called WYLDE International in 2007 after discovering that businesses face challenges primarily because of their owners’ mindsets.

Of drive and eccentricity

Instead of focusing on hardcore tech requiring coding and building products with his computer science degree, Joram and his friend chose to solve human problems differently by helping businesses make sense of their solutions and unique value propositions. Today he is chasing his passion full steam ahead, with everything he has done to date in pursuit of this dream.

If you're curious about Joram's drive, it is majorly about serving others.

"I kept seeing a gap on the human side of interaction with technology. I have always seen that people could be excellent at the technology aspect of building up the codes but terrible at understanding the problems that that code is supposed to go and solve. I've been very passionate about promoting individual local solutions to the challenges that businesses face and helping them access the kind of solutions that would help them to grow."

With more clients coming in for management consulting, Joram discovered the problem runs deeper than that; it was only a matter of time before Joram decided to do something bigger. And in 2020, Joram co-founded SNDBX, an entrepreneur support hub — an upgrade from WYLDE. Being ambitious, he needed to create something that would help similarly ambitious entrepreneurs avoid mistakes while building and scaling their businesses.

"We have a bit of a unique setup. What would traditionally be looked at as an incubator/accelerator? What we have in addition is that we also bring together about 33 different professional services under one roof so that as people build their businesses, they also look for access to things like legal services, governance, HR, marketing, branding, literally everything. We're able to avail those services as well, and so people can build holistic services that can grow and scale. And of course, this being Nairobi, a lot of these businesses are in the tech space, but we also deal with quite a number of businesses outside of that as well."

Joram calls it a consortium. Think of it this way, you have an idea for a soon-to-launch business in Kenya, and you need professional advice. When you arrange a meeting with Joram or any of his nine team members and have a discussion, you can access recommended professional services immediately because they are all under the same roof.

A quick reminder that even before SNDBX, Joram was always all about entrepreneurship and innovation.

But there’s a catch.

And this is where his story gets a bit interesting; Joram is not always excited about new technologies because he's all for the useful tech elements that have a return on investment. However, he has remained relevant by keeping up with the latest trends, especially how they key into the ecosystem.

"Even though I couldn't code to save my life today, I would be very comfortable in a technology solution conversation, and probably being able to then make the best decision around, for example, which language or which platform or which hardware or software would be best to tackle a specific type of solution.

“I read local and international magazines about just what's happening out there. I'm subscribed to quite a number of forums online that talk about the trends of what's happening almost on a daily basis. The podcasts that I listen to, of different authorities around the world or YouTube videos that I watch keep me sufficiently updated."

Somewhere down the line, Joram picked up and developed human-centred design skills, which he considers very important to what he does.

"Certain human behaviours look simple but understanding them makes [them] more valuable... and I find out that a lot of people take such thing[s] for granted."

Of gains and keeping it together

He's excited about the prospects that Africa’s local challenges present. In a breath, he mentioned different ideas he's been playing around with for Africa’s informal sector: something to make payment seamless for the hawker in traffic, an inventory system for a second-hand clothing vendor, or a solution to fund Africa’s communal life.

Unsurprisingly, stories about how he has helped different businesses steer themselves towards success are at the top of Joram's success list. He is proud to be helping the continent create more entrepreneurs building multinationals and startups that have gone beyond the continent's borders.

"For me, one of the most fulfilling things is to see an entrepreneur translate the knowledge that they are learning into actions within the business and then begin to see the growth and hire more business people.”

Meanwhile, he's sometimes limited by the challenges facing businesses on the continent.

Joram agrees that being a husband and father of four while being stretched at work can be challenging, but he seems to be managing alright. On a regular day, he drops his kids at school before heading to work, where he meets with his team and customers, responds to emails, and does work-related reading.

Doing most of his work on his phone definitely helps, so he's available to respond to work in real-time and get things out of the way by delegating while on the move. Evenings are for spending time with his family, exercising, listening to podcasts, and reading; he's currently writing a book about entrepreneurship which he plans to launch this year.

By the way, there's something interesting about how he can maintain a work-life balance. He is calendar-driven, but while calendar scheduling is highly recommended for time management, Joram optimises it to prioritise his family.

"I've always had to have that philosophy of building in the rocks first. If you look at my digital calendar, I have built in all I do with my family first; those are already built into my calendar, and a lot of people find it surprising that I keep it in my calendar. After building all the family stuff, then I'll now come back and build in the important work meetings that are recurring. Then after that is when I plan everything else. I also try to have a one-week holiday every quarter.”

WhatsApp and notepad also come in handy to keep communication going and log ideas. Meanwhile, he dreams of a time when there would be 5,000 SNDBXs across major cities worldwide.

"If I live long enough, we plan to have a SNDBX in every continent, in every country possible. So, the number I have in my head is 5,000 SNDBXs across the world. All the way in the different cities in China, in South America, in the US, in Europe.”

But he fears not being able to implement the ideas in his head before time runs out. He agrees that this makes him uncomfortable with slow execution.

Talking of his philosophy, Joram says, "As I've grown older, I’ve realised that a lot of what we're unable to achieve is maybe because of pride or ego, not being able to ask for help. So, I find myself nowadays asking for help a lot and very quickly and very early rather than trying to struggle at something that I'm not very good  [at] doing."