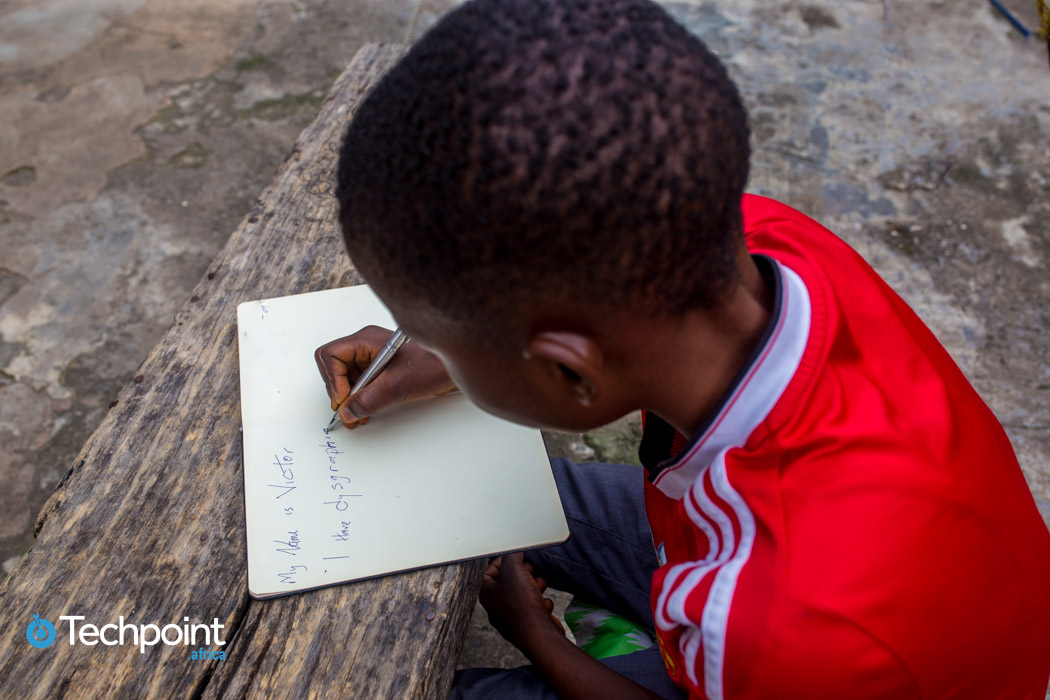 Henry*, a 9-year-old student, was diagnosed with dysgraphia when he was seven years old. He has trouble gripping a pencil, which always leads to hand cramps and fatigue.

“Henry’s handwriting was unusual and inconsistent. It was sad to see him struggle to write at home because it seemed like his teachers were punishing him by having him write in class,” Henry’s dad recalls.

According to the United Nations Educational, Scientific and Cultural Organization (UNESCO), writing necessitates a complex set of motor and information processing skills which includes the ability to organise thoughts coherently and then write them down on paper.

However, dysgraphia impairs these abilities in varying degrees.

“Prior to the diagnosis, I had received numerous reports from his teachers indicating that my son was lazy and unable to write. They advised me to withdraw him. But Henry was a natural communicator. He could speak and express himself clearly in words. I knew something was wrong. So, in 2019, I took him for diagnosis,” his dad says.

Dysgraphia is a neurological condition that impairs writing and fine motor skills. It is a learning disability that affects both children and adults, and it affects almost every aspect of the writing process, including spelling, legibility, word spacing, and sizing.

Dysgraphia is a condition that has received little attention from researchers globally. As a result, estimating the prevalence of dysgraphia is difficult.

However, according to research, Dr Reynold Cecil Randy, an American psychology professor, estimates that the prevalence of dysgraphia ranges from 5 to 20% in the world. Besides, men are more likely to suffer from dysgraphia than women.

Nevertheless, dysgraphia may remain unnoticed from childhood until adulthood.

When dysgraphia appears in childhood, it is usually due to a problem with orthographic coding.

The International Dyslexia Association (IDA), a non-profit education and advocacy organisation devoted to issues surrounding dyslexia, describes orthographic coding as the ability to store written words in working memory while the letters in words are analysed.

The IDA also describes it as the ability to form long-term memories of written words associated with their pronunciation and meaning.

Additionally, children with dysgraphia do not have a primary developmental motor disorder, another cause of poor handwriting. Nonetheless, they may struggle to plan sequential finger movements without visual feedback, such as touching the thumb to successive fingers on the same hand.

According to a study, students with dysgraphia may struggle to learn, complete coursework, communicate, record ideas, demonstrate knowledge, and keep up with their peers and teachers’ instructions.

This can also cause or exacerbate emotional, academic, and social development deficits in students, as well as “impact factors like self-efficacy, self-esteem, anxiety, and depression, all of which are linked to educational motivation, achievement, and persistence.”

In adults, it is most prevalent following a traumatic event and is usually associated with damage to the brain’s parietal lobe.

Individuals with dysgraphia frequently use incorrect words to convey their message. For instance, instead of saying “child,” they say “boy.”

Even so, children with dysgraphia may have good oral skills, but they may be misunderstood as lazy and uninterested or indifferent because they cannot write.

In summary, dysgraphia makes it difficult for children and adults to plan and execute a sentence, words, or even letters in writing. Therefore, it’s not as if individuals with dysgraphia can’t read, spell, or recognise letters and words. It’s just that their brains struggle to process words and write.

So, it is critical to understand that dysgraphia is a neurological disorder, not a cognitive impairment.

Relationship between dysgraphia and dyslexia

Dysgraphia was initially grouped with dyslexia until 1936 when Anna Gillingham — an educator and psychologist best known for her contributions to the Orton-Gillingham method of teaching dyslexic children to read — led a series of workshops on reading, spelling, and handwriting, according to a study.

Moreso, both disabilities make it difficult for people to convert phonemes (sounds) into graphemes (letters in written form). That is, they affect the ability to spell.

According to Lexercise, a Structured Language Therapy programme based on the Orton Gillingham methodology for children with learning disabilities, language disorders can occur independently or in conjunction with other problems.

Therefore, dysgraphia can coexist with other learning disabilities such as dyslexia, dyscalculia, dyspraxia, and Attention Deficit Hyperactivity Disorder (ADHD).

Some beneficial assistive technologies (AT) can help students and adults with dysgraphia access information and demonstrate what they know in writing.

A study by the University of Washington shows that finding a set of appropriate AT tools and techniques for a specific individual may necessitate some trial and error.

Therefore, a person with a learning disability should be involved in the selection of their technology. They should assist in determining what works for them.

Here are five AT tools that can be tested, discarded, adapted or refined by students with dysgraphia.

Designed in 1992 by Dr Lois Provda, an educational therapist, the Pencil Grip is used extensively in classrooms, homes, and therapeutic settings.

Pencil Grips are small attachments that are placed at the end of a pencil. They assist a child in grasping a pencil practically and accurately.

When used correctly, a Pencil Grip can help develop fine motor skills and handwriting control. Its distinctive, one-of-a-kind design gently allows the fingers and hand to rest in the correct gripping position.

With a Pencil Grip that fits over the pencil, the thumb, index, and middle fingers are perfectly positioned. When a child grasps a pencil correctly, they write faster and neater without tiring out their hand muscles.

Because there are so many different Pencil Grips, it’s critical to understand a child’s specific needs.

For example, there is a Pencil Grip with built-in guards for students who wrap their thumbs around their index fingers. With this type of Pencil Grip, their fingers may find it easier to maintain proper posture with the protectors on.

According to a recent study by Nova Southeastern University (NSU) in Florida, “the handwriting task is modified by elevating the upper extremity to stabilise the wrist in extension while also allowing the hand and forearm to rest on a supportive surface when using a slant board set at 20 degrees.”

The concept behind using a slant board to improve pencil grip is based on wrist position.

To produce legible written work, a student must move their wrist and elbow in a fluid motion. To be effective, the wrist must be extended or up-bent.

So, the slant board promotes wrist extension when writing by causing the wrist to extend while the fingers flex and naturally fall into a better writing position.

People with learning disabilities are often visual learners and thinkers, according to the Learning Disabilities Association of America. This means when ideas, words, and concepts are associated with pictures, diagrams, charts, and maps, they understand and remember such information better.

Graphic organisers are simple but powerful tools that can help people with dysgraphia, executive functioning issues, or other issues that cause writing difficulties.

Graphic organisers are visual thinking tools that help individuals visualise their ideas. The images show relationships between facts, concepts, or ideas and guide their thinking as they create the map or diagram.

Venn diagrams demonstrate how different things or ideas can overlap to show, compare, or contrast relationships.

Concept maps help organise information, brainstorm ideas, visualising them, and planning what you want to write.

Mind maps are graphical representations of hierarchical data that include a central idea surrounded by connected branches of related topics.

Flow charts are graphic organisers that show how different steps in a process interact with each other. This makes them valuable tools for communicating how methods work and documenting how a particular job is done.

Mapping a process in a flow chart format can help clarify the process and show where the process can be improved.

Handwriting can be painful and tiring for people with dysgraphia, so typing written work on a computer is essential.

Using keyboards and touchscreens allows them to enter letters and words by typing or touching the screen. So, a keyboard with alphabetical keys or vowels and consonants in different colours may be the perfect fit for someone with dysgraphia.

Instead of writing by hand or with a keyboard, dictation allows people to write words by speaking them aloud. People can use dictation to write, edit, and revise their work.

Other tools that can be used

Tools like predictive text, writing guide, raised-line paper, lettering stencils, electronic dictionaries and Thesaurus, and Word Banks are examples of other tools that can help people with dysgraphia.

Grammarly is an app that assists people with spelling and grammar that they might overlook because they focus on content rather than writing.

Evernote is a note-taking app that allows people to photograph worksheets and type answers directly into the blanks. It can also be synchronised across devices, giving users access to notes and other items no matter where they are working.

Regardless, rather than focusing on a person’s disabilities, AT tools allow them to demonstrate and apply their intelligence and knowledge.

Consequently, with occupational therapy and support from parents, teachers, and loved ones, AT tools can help people with dysgraphia to reach their full potential in school and at home.