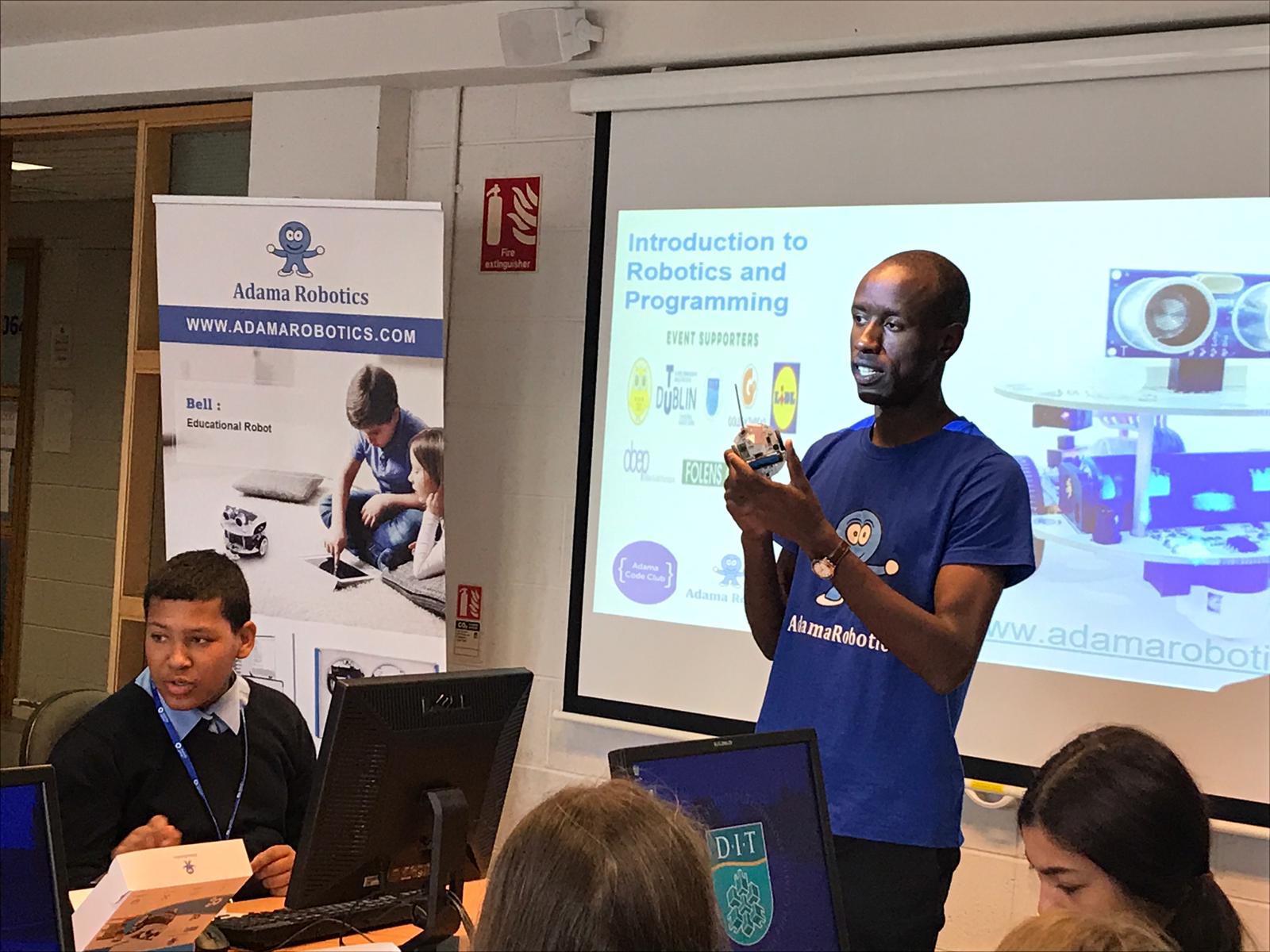 From interpersonal communication to business transactions, technology is fast changing the conventional way of doing most things. And Africa has not been left out in the wave of groundbreaking innovations.

Many young Africans are joining in the development of novel tech infrastructure and building products that cut across various fields.

Nonetheless, Africa’s young population — aged 15 to 24 — make up more than 200 million of her over 1 billion populace. These youth account for a large chunk of the unemployed. Interestingly, of the 20 countries with the youngest population in the world, 19 are African.

Combine this with the continent’s worryingly low number of upskilled developers and a limited tech talent pool, and you have a situation that can hinder Africa’s technological advancement.

Dissatisfied with this situation, Dauda Barry, a London-based Senegalese serial entrepreneur, was propelled to start Alida School in March 2021, an online coding school for Africans.

After getting a degree in computer science from the Queen Mary University of London, he founded Adama Robotics in 2016, an AI company that builds and sells educational robotic kits.

“Building up Adama Robotics, being part of the startup ecosystem in London, I began hearing about Lambda School. I liked the model; the fact that it shifts the risk from the students to the organisation. Then I thought, ‘why not build a Lambda for Africa?’

For context, Lambda is a US-based online coding school that offers a six-month training course with tuition deducted as a certain percentage from students’ income when they land their first jobs.

Reports reveal that 60% of Africa’s unemployed population are youth, a statistic that Mthuli Ncube, former Chief Economist at the African Development Bank (AfDB), describes as “…unacceptable for a continent with such an impressive pool of youth, talent and creativity.”

And Barry shares this view.

“You know, we have the young, the growing, and the innovative in the continent; mobile Internet penetration is rising, while its cost is falling a bit. There are many tech startups in Africa, yet we produce fewer computer scientists and developers than the rest of the world. So I thought, ‘how can we bridge this gap?’”

A Statista report states that as of 2019, only 7.7% of households in Africa were estimated to have a computer at home. As Barry thought about building a Lambda for Africa, he wondered how students in the African market would access stable Internet and computers for classes.

This question was answered when he paid a visit to Senegal in February 2021.

“I was in Dakar, and I noticed my cousin who was running a degree in computer science taking most of his classes remotely. Then later, he took me to the community centre, where they had computers and Internet for people to use. Then I thought, ‘Oh! A Lambda School for Africa can work in Senegal.'”

Realising the feasibility, Barry began building Alida School upon his return to London in March 2021.

The initial plan was to teach young Senegalese how to code. However, upon announcing application openings for the first cohort on Twitter, things took a surprising turn.

“We started to receive applications from Kenya, Nigeria, and Guinea Bissau. In fact, our current students in this first cohort are mainly from Kenya and Nigeria.”

So, the focus moved from Senegal to the rest of Africa.

And by ‘we’, he’s referring to himself and his co-founder. While searching for good tutors, he met his co-founder, George Chinedu Ikwegbu, a computer engineering graduate of Michael Okpara University, Umudike, Abia State, Nigeria.

“There I was on Twitter, reading through and learning from insightful threads as usual, when Dauda sent me a DM, introducing me to his plans for Alida School and asking if it was something I’d like to join,” Ikwegbu recounts.

Ikwegbu, who has a flair for teaching, didn’t hesitate to jump on the offer.

“I have always loved teaching, and so I told him yes. We then talked about my proficiency in programming languages. After a series of tests and virtual coffee conversations, I became a partner and coding tutor at Alida School.”

Currently, Alida School is cohort-based, with each cohort running for 12 weeks. Alida School provides schooling in mainly front-end web development, Git, and Vue.js, and the first cohort is currently eleven weeks into the programme. Classes are held virtually, from 7-9 p.m. on weekdays.

Before students are enrolled, they are interviewed. Barry believes this helps to filter out those who might not be committed to the course.

“Online course completion is at 52-53% rate in the world today, and so George and I monitor the attendance and check for accountability tightly. During the interview, we make it clear that attendance is at least 90%,” Barry says.

Tuition is paid via a hybrid model. Students make a part payment upfront, and then the rest is paid using an income share agreement (ISA) when they land their first jobs.

“Some of the students prefer paying the tuition upfront because to them, it helps with consistency. Knowing that they have paid for the classes, they can’t afford to miss any,”  Barry adds.

The hybrid payment model is similar to that of Decagon Institute, a Lagos-based coding school that offers a six-month training for software engineers, using upfront payment or the ISA method.

While the current fee of $180 is seemingly steep, Barry says it was reached after a lot of deliberation.

“Compared to our competitors in the West, who charge as much as $9,000, ours is somewhat fair. I’m a big advocate of a business being sustainable. Initially, we wanted to charge higher, but we went and asked for feedback from Senegalese people, based on their monthly and average salaries, and $180 was the highest we could go.”

For the time being, Alida School’s primary means of revenue is from its paying customers, and Barry discloses that there are plans to apply for funding.

“Eventually, we’ll apply for funding, but for now, we’re dependent on tuition. We’re still a small team, and I think small teams are good. We’ll be faster, and with time, extend our runway.”

Ikwegbu says that a major challenge so far has been poor Internet connectivity.

“Sometimes, I’m taking a class, and suddenly the network cuts and students can’t follow any more until after a while. This greatly affects us,” he says.

Commenting on the issue, Barry reveals that plans are underway for the school to partner with telcos and get subsidised data bundles for students.

“We have maybe 60 to 70% of good Internet. So far, I’ll rate it 8 or 9 out of 10, which actually is not great, but it could be worse. Hopefully, things improve with time. The plan is to partner with telcos to get a stable source of data for our students at subsidised rates.”

Also, Barry shares that the startup has challenges with payments and transactions made to countries outside Africa. There are usually many glitches when students are trying to pay their fees.

“As much as a lot of fintechs in Africa are really putting in the work, there’s still a lot that can be done with getting funds across to bank accounts outside the continent.”

What does the future hold for Alida School?

“We’re currently recruiting tutors for back-end so that we can raise more full-stack developers. For the next cohort, new courses will be integrated into the platform like back-end, app development (iOS and Android) and Data Science,” says Barry

Also adding that the big picture is to reduce the unemployment and poverty gap while raising the next generation of tech talent in Africa, Barry says, “There is a big need to raise local talents in Africa. A lot of companies are outsourcing their talent needs to European developers to carry out projects.”

Another goal for the second cohort is a remote and physical expansion to cities in other African countries.

“Our long term plans include foraying into major tech growing cities in Ghana, South Africa, and Rwanda, and also establishing a physical school in Africa, where we can teach people in person,” Barry reveals.

And because the school currently runs an English speaking teaching method, most Senegalese students usually do not want to enrol.

“They’re worried that they won’t be able to follow through because of their English, so we’re looking to employ someone who can teach coding in French, so we can get more applications from Francophone African countries,” Barry shares.

With the various challenges that Africa’s burgeoning tech scene faces, startups like Alida School will go a long way in creating and refining talents to bolster the growth of technological innovations on the continent.