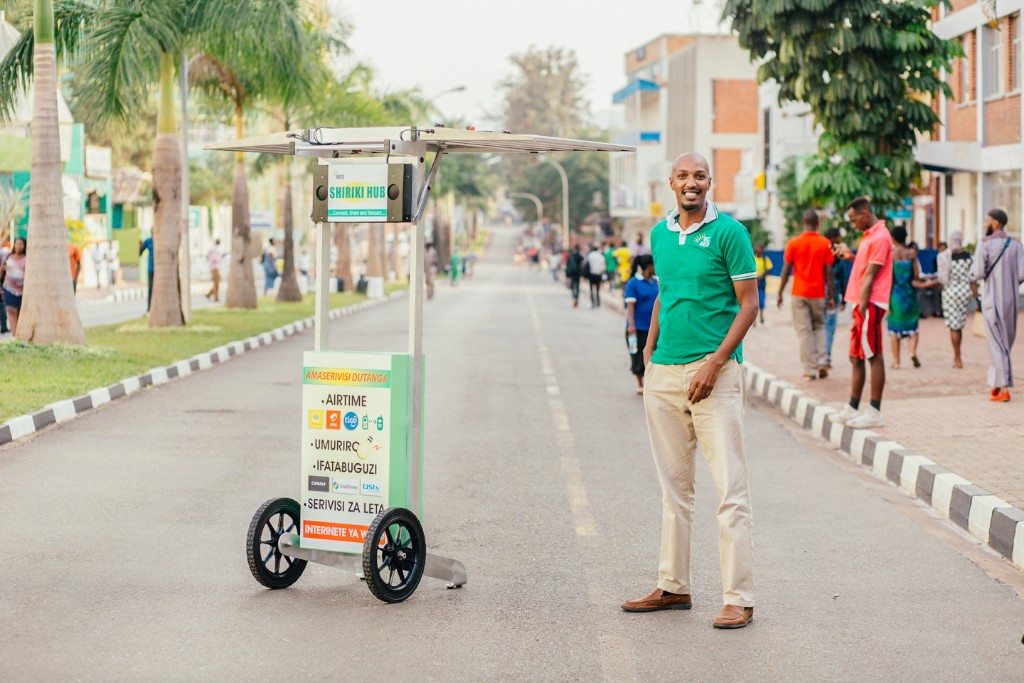 Rwandan entrepreneur, Henri Nyakarundi, moved to the US in 1996 to study computer science at Georgia State University. Upon graduation, Nyakarundi realised he did not fancy 9-5 jobs and he was an entrepreneur at heart.

Over the next ten years, he founded trucking and construction businesses in both the US and Burundi but with his true passion lying in the green industry, Nyakarundi returned to Rwanda in 2013 to start another company.

“My previous businesses had been fully focused on profits and I promised myself that my next business was going to have some impact, ” Nyakarundi tells Techpoint.

According to the entrepreneur, low income earners in rural and semi-urban areas across Africa find it difficult to access Internet connectivity and digital services. His statement is backed up by a 2018 GSMA report which stated that mobile Internet and content penetration in sub-Saharan Africa stood at 24% and 11% respectively.

“Looking at this gap, I saw a huge opportunity to use technology for social good.”

With data to back his pursuits and a motivation to impact his community, Nyakarundi founded African Renewable Energy Distributor, ARED, as a one-stop renewable energy platform to facilitate last mile access to offline and online digital content via wi-fi.

Starting out as a “business-in-a-box” solar kiosk provider in its first few years, ARED used its technology to offer phone charging solutions to customers. As of 2016, the company had about 25 of these kiosks operating in Rwanda and there was talk of the company adding intranet services to its list of offerings.

An agent with his solar kiosk

“One of the biggest challenges of low income people is the high cost of access to the Internet because most of the content is stored outside the continent. Using our high capacity router and solar kiosk technology via wi-fi, we can solve this problem,” says Nyakarundi of his company’s strategic move.

With a high capacity router, solar technology, and wi-fi, ARED now works differently from how it did when it was just a solar kiosk provider.

Quite a novel innovation, Nyakarundi claims ARED is the only company in Africa that has built a localised edge network accessible via wi-fi on a solar kiosk.

ARED uses a micro franchise model to recruit, train, and monitor agents who operate the kiosks, most of which, according to Nyakarundi, are women. The company then shares the revenue generated from the services provided with these agents.

Playing in rural and semi-urban markets and securing a patent for its technology, the company has made a green impact by using renewable energy to power its solution, with its social impact being made by the creation of jobs using its solar kiosks.

To effectively expand and minimise the risk of failure without having to raise a lot of money, most businesses in sub-Saharan Africa have to secure a lot of partnerships. This is the path ARED has decided to tread in order to scale and even with some loopholes in this business model, like any other, it seems to be working out.

“ARED is a platform-as-a-service company. What this means is, we license our technology to NGOs, ISPs, or businesses that want to use our solution to build a smart edge network in low income areas, and we develop a revenue sharing structure with these entities.”

While catering for low income areas for now, the Rwandan company has plans to extend this offering to the urban market, with the high capacity router as a stand-alone product in the near future.

When ARED started out in 2013, it survived mostly through grants but it has since gone on to raise significant venture capital of almost $500,000.

In terms of traction and revenue, the company has put up some impressive numbers. With 120 access points in Rwanda and Uganda, ARED has made over 500,000 digital transactions while serving more than  200,000 customers.

Nyakurundi believes the company will be profitable in the next two years if it continues its licensing business model and secures more partners.

Speaking on challenges, the founder says one of the biggest his team has constantly had to face is finding capital for research and development (R&D) which is understandable considering how difficult it is to fund and scale a hardware company in Africa.

“Our ecosystem is not well developed and the most challenging part is in the R&D sector where there are hardly any grants to promote it unlike Western countries where they spend billions on R&D,” he adds.

Expansion, Nyakarundi points out, is another major hurdle.

“The second challenge was our expansion into other countries. The market in Africa is extremely fragmented and opening shop in every market is very expensive.”

Though the experience has been a difficult one, Nyakarundi wants bet big on two of Africa’s most populous countries as the company recently started a pilot in Nigeria while simultaneously keeping Ethiopia within its sights this year.

“We just started our pilot in Nigeria with a partner which we are very excited about. We believe the Nigerian market will make ARED profitable and also Ethiopia will be our next market in 2020.”

Currently in its seventh year of operation, these expansion plans are setting up the company for the one thing at the back of Henri Nyakarundi’s mind: an exit.

“Our goal is to prepare for an exit in the next three years.”