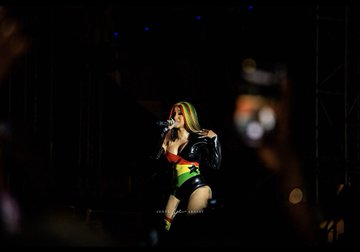 Last week Friday, American rapper Cardi B landed Nigeria for the Livespot Festival. The female rapper was scheduled to perform in Lagos, Nigeria on Satuday December 7 and in Accra, Ghana on Sunday December 8, 2019.

Cardi had a great time experiencing Lagos as was seen in her numerous Instagram Stories. Read all about her stay in Nigeria here.

She left Nigeria for Ghana on Sunday morning still enjoying her first visit to Africa. Things however took a dramatic turn as a result of a misunderstanding regarding a meet and greet session Cardi B was supposed to have with some Ghanaian celebrities.

So #cardibinGhana and I am sure she is wowed from airport , the convoy and the 12 star hotel she just lodged in , she is going to enjoy 24/7 running taps and electricity .. unlike the other country 🤣🤣 #YearOfReturn welcome to Ghana 🇬🇭

Cardi B is really living life in Ghana, we love to see it pic.twitter.com/WU6LAo5PXI

Cardi B went to Nigeria and didn’t wear any of their traditional cloths? 😂

So u guys called us to come have a one on one lunch date with @iamcardib and she has been chewing khebab for 7 hours in her room without showing up
What do u guys take Ghana celebrities for ?! This can never happen in Nigeria
Wake up Ghana !
She is Cardi B and I am WENDY SHAY!

She feels hurt for her big sisters sitting out there ooo. The matter chop hot#cardibinGhana #CardiB #SoulConcepts pic.twitter.com/N9w5dkXVEc

If it is coming, it is doing. Wendy Shay, Cardi B has replied you😂😂😂😂😂😂😂 she's Cardi B and you're Wendy Shay so reply back 🤣🤣🤣🤣 #cardibinGhana 🔥🔥 pic.twitter.com/o7pqcWGfUF

Cardi B talking about Moesha , Becca , Efia Odo , Hajia4Real and friends.. Humm !! It’s really bad .. She went to Nigeria and everything was nice and cool but see what happened yesterday.. I saw this coming 🤦🏼‍♂️🤦🏼‍♂️🤦🏼‍♂️🤦🏼‍♂️ #cardibinGhana #khebab #CardiB pic.twitter.com/BXFIxkUyZz

Cardi B blasting Ghanaian Celebrities who called her out for standing them up. pic.twitter.com/PplbrrUDyn

Ghanaian Actress Rosemond Brown's Wig Falls Off While Twerking After She Challenged #cardib to a #twerk contest In Ghana!!! pic.twitter.com/i3e7ioUTiv

Ok guys this is most hurtful thing ever ever ever damnnn 😂🤣😂😢😢😢pic.twitter.com/2G48Mo44Sy #cardibinGhana

Why do Ghana Celeb don't even have value on their own self, this can never happen in Nigeria because all the Celeb are big and also value their self #cardibinGhana

Nigerians were having a field day

Ghanaians walking past Cardi B at the pool https://t.co/as7ks7QUhZ

The British bought Nigeria from unilever for £86500 😂😂 A whole country was bought from a company 😂😂 How do u expect ur minds to work after u have been bought?😂😂 #GhanavrsNaija

Ghanaians know their country is so bad that they gave themselves a one star rating. 😂😂😂😂 #GhanavrsNaija pic.twitter.com/WtjH60Ffow

Cardi B to our local bad bitches pic.twitter.com/teBkwCVrgo

On Wednesday this week, The Punch published an editorial that revealed its stand against President Buhari’s administration.

The beginning of the editorial read; “As a symbolic demonstration of our protest against autocracy and military-style repression, PUNCH (all our print newspapers, The PUNCH, Saturday PUNCH, Sunday PUNCH, PUNCH Sports Extra, and digital platforms, most especially Punchng.com) will henceforth prefix Buhari’s name with his rank as a military dictator in the 80s, Major General, and refer to his administration as a regime, until they purge themselves of their insufferable contempt for the rule of law.”

Other publications joined in to take a stand.

NOTICE | As a show of protest for the consistent disregard for the rule of law and clampdown on freedom of expression in #Nigeria, we shall henceforth address President Muhammadu @MBuhari with the prefix: 'Dictator' in all our publications. pic.twitter.com/lGRMIjqsnT

The Print Media vs Major-General Buhari

These three media outlets have taken a stand… History will be kind to them. pic.twitter.com/4nQw31K1Nq

I wish other media houses will emulate the Punch.

I say let us all refer to him as Major General Buhari until he learns to respect the rule of law. pic.twitter.com/pLdSDZBYHv

@MobilePunch has set the pace for others to follow. There is no fence for anyone to sit on. You're either in support of tyranny or against it. Major-General Buhari and his dictatorial regime will not conquer the Nigerian people. Resistance is the only cure for tyranny. pic.twitter.com/o5feFxovPX

The title is very appropriate

Four in one. Major General Buhari, stop deceiving Nigerians in civilian clothing. Your military regime has eroded all our democratic gains since 1999. Suspend the constitution and your rubber stamp National Assembly. Ask for your military uniforms and start wearing it daily. pic.twitter.com/qQyMjK0y4W

Major General Buhari, the deceptively amiable gap-toothed dictator at the head of the Nigerian regime notorious for human rights abuses and crimes against the economy. https://t.co/eOY5VNo2ot

Major General Buhari is the biggest threat to the unity and democratic survival of Nigeria. Dictatorship tendencies… https://t.co/XdREjDpn4P

If you decide to call him Major General, he wasn’t dashed the rank, he earned it. So, you are not completely out of order. The fact that you can do so is even another testimony to press freedom in Nigeria.

The reported new editorial policy of the Punch Newspapers to address President Muhammadu Buhari as Major General in his official title and refer to his government as a regime instead of administration, comes to us as totally curious and utterly incredible.

Before, during and after 2019 election, PDP and its presidential candidate had called the President ‘Major General Buhari’ thousands times and it didn’t stop Nigerians from trusting and giving their President another four years mandate. Calling him that will NEVER be a bad thing.

They say Punch’s decision to refer to PMB as Major General Buhari is irrelevant but as at the last count, Garba Shehu, Femi Adeshina, Bashir, ati be be lo have all reacted to that one singular symbolic move. Nigerians, just think about what we can achieve if we step up our game.

Femi Adesina,The once respected Editor of The Sun Newspaper is pissing all over himself in trying to address this Punch Newspaper situation.

When people like Bashir or Femi Adesina defend the government, at least we know that's how they feed their families.

What irks me most is when i see people who are the most disadvantaged in society follow suit.

Aisha Buhari was trending too

GARBA SHEHU HAS GONE BEYOND HIS BOUNDARIES pic.twitter.com/8LHvrTrW0E

Pls do not be distracted by the war of personal aggrandizement between Aisha Buhari, Mamman Daura & Garba Shehu.

Twitter today is for @MobilePunch's bold move to stand up to the autocratic regime of the day by henceforth designating Buhari 'Major-General', no longer 'President'.

If Aisha Buhari cannot say what the hell is going on in Aso-rock then she should forever hold her peace or go keep herself busy in the kitchen.

My honest to God opinion is that she is manipulative. Throwing snippets to us so that we fight her enemies for her. https://t.co/ZFHZITkYSG

Call @MBuhari anything you want, I love General Buhari for 1 thing, he won't utter a word while you exhibit yr madness. He will patiently allow you cross the red line, or touch the public treasuries then you will know wassup. ✊🏽✊🏽✊🏽

Whether Major General Buhari or Not, God will Never Allow PDP at Federal Level

How is Tolu Ogunlesi coping with all these messy state of the Presidency?

As in you don't even know who to obey of follow his directives.

Is it Mamman Daura or Abah Kyari or Major General Buhari himself?

Such a confused and disjointed Presidency.

Will the Punch calling PMB 'Major General' Buhari stop him from being the President of Nigeria?. What will the new sobriquet change?

It looks like a petty new frivolity of no value.

After Major General Buhari's regime Nigerians will adulate each & every Past Presidents or Heads of State to ever grace this country.

Just look how 🇳🇬 is about one man, instead of facing the many dire issues ravaging us we're still addressing the insecurities of the man.Tragic

Black out in Nigeria

While Nigerians were discussing The Punch‘s stance, the National Union of Electricity Employees (NUEE) embarked on a nationwide strike on Wednesday shutting down the offices of distribution companies across the country. The union’s strike was aimed at putting an end to the ill treatment of its members.

“President of the NUEE, Joe Ajaero, had, in a statement, accused the Bureau of Public Enterprise of failing to address and pay up over 2,000 disengaged workers of the Power Holding Company of Nigeria since 2013,” a report by The Punch reads.

This led to a blackout across Nigeria.

But How can NEPA/PHCN go on strike ?

What sort of radarada is this ?

I heard PHCN has shut down power nationwide, how true is this?
.
What's your location and una get light?

So PHCN or NEPA has gone on strike? For light wey no dey dey before?

Or what kind of fuckery is this !

Most Nigerians didn't know NEPA was on strike till PHCN started trending
Most of us thought it is just the usual no light stuffs pic.twitter.com/GkjA1D58wR

You know how this works, if NEPA or PHCN or what do they call them, decide to go on strike for reals, naso fuel go wan increase too.

Which kind of country is this na? F

Wait.. PHCN on strike?
LOL.. Were they working before?
Mad pple…
😁😁

The strike was suspended the following day

Dear customer, National Union of Electricity Employees (NUEE) has suspended its strike. Our offices & payment channels are open for business. Thank you for your patience & understanding.

BREAKING NEWS: I just heard on the radio that the #Blackout is over and that the ongoing strike by the #PHCN has been CALLED OFF. So y'all should relax. NEPA go give una light before the end of today.