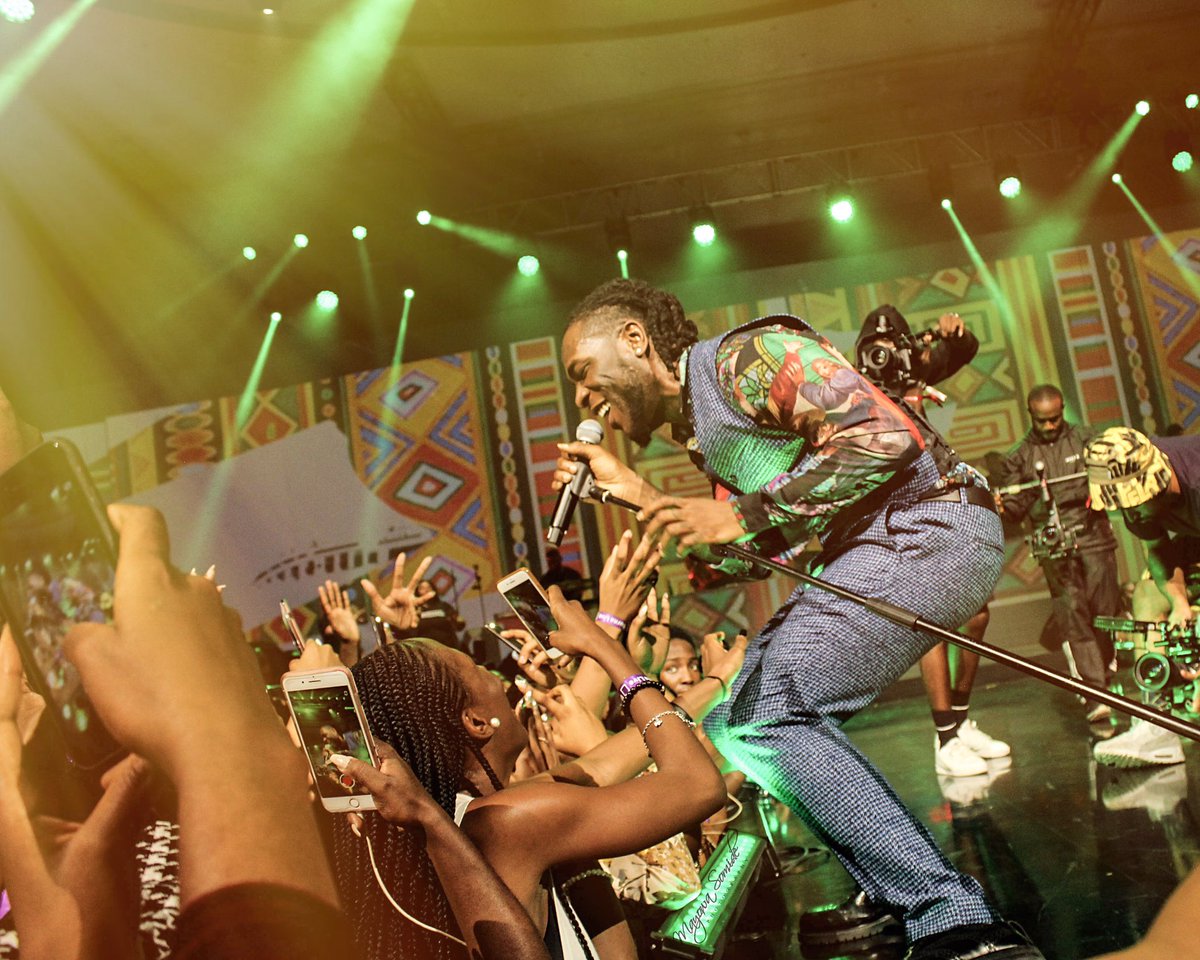 About two months after his threat, Burna boy was set to take the stage in South Africa this month but it was cancelled following threats of violence from some South Africans who haven’t forgotten Burna’s comments.

While this news spread, The Grammy Awards released the nominee list for its 62nd edition scheduled for January 2020. Burna Boy’s African Giant album was nominated in the Best World Music Album category.

African Giant Album is nominated for Best world music Album at the #Grammys  !
Thank you @RecordingAcad and everyone supporting me and the album! 🦍 #AfricanGiant #GRAMMYs

Burna Boy worked hard is ass off and never looked down on anyone. Always willing to collaborate anytime any day. No be today ! I’m glad I’m witnessing all of it. Congratulations again @burnaboy 🙌🏾

Congratulations @burnaboy on the @RecordingAcad nomination best wishes and love.👏🏽✔️

Don't tell me you are surprised that Burna Boy was nominated for the Grammy's.
🎶 Anybody🎶
🎶 Gum Body🎶
🎶 Wetin Man Go do 🎶
🎶 Ye🎶
🎶 Spiritual🎶
🎶 Dangote🎶
Only a true #AfricanGiant is capable! 🏆

Nigeria to the world!

2face showed us to the world 🌍

9ice promised us a Grammy 🏆

Burna Boy is nominated 4 a Grammy

Nigeria 🇳🇬 is getting closer and closer💪

Big ups on your Grammy nominations, BURNA!
An African Giant we stan!🙌

January 26 shall become an African Holiday! The day Burnaboy wins the Grammy! Save this tweet

Had a dream Burna boy won his grammy and cried a little. My dreams never lie.

Burna Boy follows King Sunny Ade, Femi and Seun Kuti into that World Music category nomination. I hope he wins it. Nigerians have been getting nominated in that category for years, about time we win it and Burna’s “African Giant” is more than deserving!

Hustle o! … so your name will not be an alias for a Grammy nominee… for example BURNA BOY “aka” African Giant 🦍 .
.
.
I repeat! Hustle o! #AfricanGiant

Wizkid getting the soul train award

While A.K.A is busy getting Bleaching cream endorsement.

Burna boy bagging a Grammy nomination shortly after being cancelled by South Africa has to be the biggest middle finger ever given in entertainment history.
Aka must be having a facial plethora right about now 😂😂😂

When Aka comes online and sees the news of Burna boy's #GRAMMYs nomination 😅 pic.twitter.com/IdR4cLNH9u

Burna Boy being classified by the Grammys as world music is incorrect. We need a new category for artists that transcend this world: galactic music. Shoot his record into space so the stars know what's up.

Released the best album out of Nigeria.

Fell in love with a beautiful Queen.

Sold out different concerts around the world.

Got nominated for a GRAMMY.

Ladies and gentlemen, Nigeria is holding you down.

The world has accepted Burna Boy's music and its delightful to see.

Earlier this week, The Punch published an interview with Fahad Al Taffaq, the Ambassador of the United Arab Emirates (UAE) to Nigeria. In the Interview, the ambassador revealed that more than 15 million tourists visited Dubai, the emirate of the UAE, in 2018.

However, the publication shared the article on Twitter with a caption and headline that suggested that 15 million Nigerians visited Dubai in 2018. This attracted a backlash, causing the publication to take down the tweet.

What a misleading headline

How's that even possible? 15million Nigerians in a year travelling to only Dubai. Lols.

As expected, people have jumped on the “15 million Nigerians” thing. Whereas, the news says 15 million foreigners. I wonder what @MobilePunch was doing with that click bait headline also. Keep misleading people

Some people didn’t read beyond the headline though

So 15 million Nigerians left this country to ordinary, common Dubai……and came back? Like, came back to this inyama of a place? Lmao. Where is the sense in that?😂

Nigerians built the economy of UAE with their to and fro movements to DUBAI. About 15 million Nigerians visited Dubai last year. This year, the number is more. When are we going to start attracting people to Nigeria? We have rich potentials for tourism.

If you actually believe 15 million Nigerians visited Dubai in 2018 then I don’t know for you again.

For 15m Nigerians to fly to Dubai in one year, there needs to be 100+ flights to Dubai daily and the planes must be full to capacity.

Say no to Social Media Bill

A proposed bill to regulate the use of social media in Nigeria dubbed the “Social Media Bill” was read on the floor of the National Assembly for the second time on Wednesday this week.

The bill, ‘Protection from Internet Falsehood and Manipulations Bill, 2019,’ sponsored by Mohammed Musa was introduced in the Senate two weeks ago.

To get an idea of the extent of the impact of this bill, should it be passed into law, on the freedom of expression on social platforms, read the screenshots below;

When the government get to play judge & jury over what is fake & what is true, their power is sweeping & the effect chilling.
Nigerians #SayNoToSocialMediaBill! pic.twitter.com/YjGn5GeqoQ

Oh this is bad. This is ambiguous and dangerous#SocialMediaBill pic.twitter.com/rfr9LXEYfB

The Bill is a replication of Singapore’s Protection from Online Falsehoods & Manipulation Act 2019 signed into law in June.
Meanwhile, Singapore is a very bad example to copy from, it ranks 151 out of 180 in @RSF_en 'World Press Freedom Index'.#SayNoToSocialMediaBill pic.twitter.com/bpz36IhDTA

This is the sponsor of the #SocialMediaBill & just listen to his "primary reason" for sponsoring a bill that wants to off our internet and send people to jail. We will be doomed if this bill becomes a law#NOTOSOCIALMEDIABILL
pic.twitter.com/JgITJyQ0io

Elisha Abbo, who should be serving time for battering a Nigerian, wants to send us to jail for having freedom of speech

Well, before the bill is passed, Elisha, you lack sense & yes, I lack manners!#SayNoToSocialMediaBill #SocialMediaBillpic.twitter.com/hI3TGdQK2s

This is nothing but a desperate attempt to control the citizens

The goal is usually to keep information from spreading and to some extent, prevent outsiders from assessing information in the country

Our voices won't matter if this goes through#SayNoToSocialMediaBill

They would have pre-informed us, that we are going back in time. Dictators in democracy. The country is suffering and in huge debts, yet; social media becomes them priority. This country sha. #SayNoToSocialMediaBill pic.twitter.com/qLBgterDAt

Any Senator who does not come out OPENLY to #SayNoToSocialMediaBill is part of the useless plot. Citizens should be able to know where the legislator representing them stand on issues. Ask your SENATOR to come out boldly and state their stance on this issue.

Can we organise a protest?
Is there a way we can make our voices heard? #SayNoToSocialMediaBill

As long as the social media bill is to stop people posting falsehood, I dont have a problem with that.
As long as we post what is true, we are good. Make dem dey waste energy on that n not increase minimum wage and make policies that will benefit the masses too.#SocialMediaBill

Below are the contact details of the 109 Senators. Don't just retweet, but also take action. Send an email! Send text messages! Call them! Tell your friends and families to do the same! TALK TO YOUR SENATORS!#Thread

Read the thread for your Senator’s contact details here and more reactions here.

No chicken in Chicken Republic

This week, we got gist that certain outlets of the Nigerian quick service restaurant chain Chicken Replubic ran out of chickens.

Just entered #chickenrepublic at sangotedo and alas they said no chicken 🙄🙄🙄 Ko Ye mi! I don’t get it… a chicken place wey no get chicken 😢😢and this hunger wey Dey my body tie wrapper o!!! #somebodyhelp

I called chicken Republic in lekki to order, the lady said no chicken, I asked why she said boarder closure. Now this is good for the country, though am not I didn't get my chickwizz.

I ordered Chicken Republic and they called me to say that they do not have chicken. Guys, what is happening?

These people went to confirm

I just confirmed guys. The chickens in the Chicken republic Suleja are still doing their job. We are safe. 🙏🕺 pic.twitter.com/Ca1QF8M34O

Just like that Chicken Republic has blown! Me I ate my own Chicken at Ikeja City Mall today. Una talk na Okoto for my ear 🐓 pic.twitter.com/I8Ol47ks98

Chicken Republic running out of chicken is like a bank telling you they have run out of money.

Tho Chicken Republic might have ran out of chicken in some of there branches today but that doesn’t mean that we don’t know that Chicken Republic has been saving lives with their N500 combo since 1992 .

If you see wetin you never see before take am join the ones wey you don see and move ahead.
Nothing new for this naija.🇳🇬
For chicken to finish for chicken republic no say the matter serious.

World’s bjggest black nation. 200 million souls. This guy woke up one day and decided to close the border. Now there’s no chicken in Chicken Republic. And life just goes on

so chicken Republic is out of Chicken 🥵🥵 who did we really offend in this country 😭😭😭😭 pic.twitter.com/Exyz8Yxkpy

Father lord in them heavens above, things have gotten so bad in Nigeria that Chicken Republic dun ran out of Chicken 😓😓😓😓 pic.twitter.com/qEDmBQnNAb

Restaurants have now run out of chicken. Please tell me again, how is the border closure helping businesses?

Do you know how many outlets only Chicken Republic has?

Chicken Republic should look for this guy …. pic.twitter.com/OouZ0RzCiH

Even those that haven't stepped their leg inside Chicken Republic are tweeting "I just entered and the waiter said……. I ordered and they told me😒😒

Mtcheeeew
They don't have chicken so??