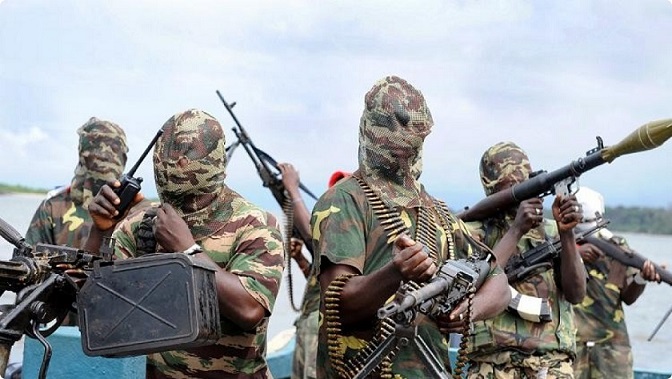 The seminar reportedly involved conversations on how religious organisations can play a role in preventing ideologies of terrorism in the society.

According to a report by The Punch, The Chief of Army Staff, Lt. Gen. Tukur Buratai represented by Chief of Administration, Maj. Gen. Sani Yusuf urged religious leaders and clerics to “fashion out ways of stepping up [their] roles, remembering that the fight against terrorism is a collective responsibility.”

Check out the flier for the seminar;

An event organised by the Chaplaincy of Nigerian army is now a tool for your regular misinformation… You will be alright one day https://t.co/mSPupXSaOC

Many Nigerians didn’t see it this way, they mostly translated the seminar to mean that the Nigerian Army wants to use prayers to fight insurgency. Here are a few of their reactions;

The Nigerian Army is going to war today, this one is on a different level. pic.twitter.com/yng1ReOXEr

Who did we offend in this country 💔💔💔😭😭😭 pic.twitter.com/iyUvC2IAD7

How did we get here?

Nigerian Army and Spiritual Warfare!
Conductor, next Bus Stop WA ooooooo. I am not going again!

I never knew a time like this would ever come.

If the Nigerian Army cannot fight off Boko Haram, who then will help us?

Buratai must be sacked now!!! pic.twitter.com/1FjruLV9DA

Nigerian Army goes spiritual. Where is our budgeted allocations to curb insurgency and violence? pic.twitter.com/532BFuoty2

Nigerian army has confirmed that what they need to defeat bokoharam is spiritual effort and not ammunitions.

When a state fails it affects every department. pic.twitter.com/Qgj31fIYEy

There are different methods to getting things done.

Congratulations to the Nigerian Army for choosing a new approach, after all "the spirit is willing but the flesh is weak". 🚶🏽‍♂️ pic.twitter.com/P4YMuXoCEh

Now that Nigerian Army has gone spiritual, can we employ the services of TB Joshua and Oyedepo? If possible, get Amadioha and Ogun involved.

Adele and Skepta are dating !!!!

ADELE IS DATING SKEPTA? LOOOOOOL this is unexpected as hell

Adele: Skepta boo, what will we be doing this night?????

Skepta: “We’ll be having sex just for exercise, every night we’ll be doing sexercise”

News reaching us is that Skepta is with Adele. This makes him the first confirmed black man to orbit around that ass. He’s a national treasure, protect him at all cost

I love this combo, sometimes both partners have to find a balance to sweeten the relationship, Skepta is hyper ..Adele is Low-key, what a blend, enjoy your moment and take it all in my dear! O le wa ku men!
GBAYI 💪 https://t.co/2Nax5dHbjR

I can't wait for Skepta to break Adele's heart so she can drop another hit Song😋 pic.twitter.com/nSjyXDgWIw

Lmaoo. Skepta and Adele are dating?? Omo the heart break songs in her new album go be number one for like 4years

When Michael and Angela from 90 days fiancé run into Skepta and Adele pic.twitter.com/ToQJwM8vbL

Me when I see an Adele ft. Skepta song😩 pic.twitter.com/Z78Fj3BMJG

I wish Adele and Skepta happiness.

A Yoruba demon inspired album by Adele go dey somehow, so I wish them all the best.

Skepta has a great dating CV. I stan ✊

Earlier today, veteran Nigerian sports journalist Charles Anazodo took to Twitter to rant about how singer Tiwa Savage walked past him and “didn’t have the courtesy to say hello”.

First of all I’m sure you saw me rushing to the studio because I was late for my interview plus I had a hat on, second I’m glad I didn’t say hi because who are you to think you can’t say hi first https://t.co/Ut1x1Xup6u

Tiwa Savage didn’t do well at all. A whole Charles, how important could her interview be. Even Jesus washed the leg of his disciples, she could have massaged Charles, asked about his day then give him money. But no she minded her business and went for her interview. Sorry Charles

If i was Charles Anazodo, Tiwa passed and didn't greet, and i am sure we have no previous beef.

Tiwa, sup with you girl. This wan you no greet us, we dey quarrel.

What happened between Tiwa & Charles just shows how much the Older NG Folks are still entitled to Greeting & see it as Pride when you don't greet. People have plenty things on their mind & might not notice you. We are adults & there are better things to worry about 🤷‍♂️

I think this Charles Anazodo feeling entitled to get a hi from Tiwa savage first shows how unnecessarily egocentric Nigerian men can get.

Imagine calling out Tiwa of all people coz of ordinary greeting. Now imagine what people close to him must be getting from him on a reg. pic.twitter.com/GPenItJdik

On this issue with Charles Anazodo and Tiwa Savage, please and please NOBODY OWES YOU ANYTHING INCLUDING GREETINGS. If person no say hello my guy lock up and hustle for your family… See how Charles drag himself down to Bitter Leaf Twitter FC 🤦🏾‍♂️🤦🏾‍♂️🤦🏾‍♂️

If you know Tiwa Savage personally, you would discover that she is literally the sweetest person on the planet. Na over nice dey worry her sometimes for street self.

That guy wet dey find greeting for wait until after interview then remind her. She for legit dobale.

Tiwa savage : who are you to think you cant say hi first?!