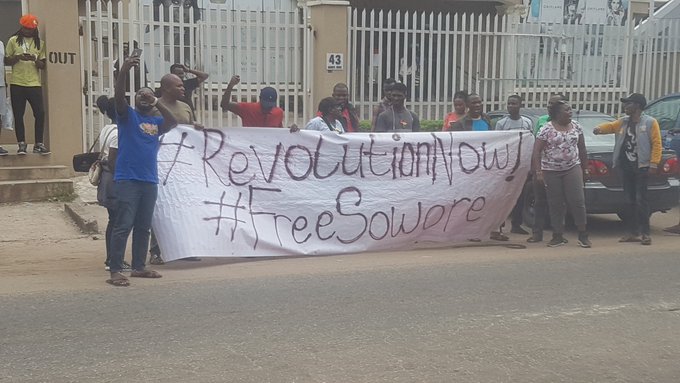 Sowore and Eedris Abdulkareem plan to shut down Nigeria on August 5 with nationwide protests, warn fake activist not to turn up (Video). https://t.co/QxM21ZeGQh

In the early hours of Saturday August 3rd, Sowore was reportedly arrested by officers of the Department of State Services (DSS). According to the Public Relations Officer of the DSS, he was arrested for threatening public safety, peaceful co-existence and social harmony in the country.”

The protest must hold as planned

#RevolutionNow organizers vow to carry on the Nationwide protest scheduled for August 5,2019 even after the arrest of Yele Sowore pic.twitter.com/GnbZOomvjy

Sowore didn't train cowards, he built intellectual, radical and patriotic young Nigerians willing to take their country back from their oppressors. With or without @YeleSowore, the youths will lead the #RevolutionNow protest come Monday August 5. pic.twitter.com/aFWmNNIc9r

They have arrested Sowore, but they cannot break our will for freedom from their oppression.

We shall not be intimidated; neither shall we be moved.
We shall go ahead with our protest on August 5.#RevolutionNow#FreeSowore

And it did…but with armed opposition

They have started arresting and harassing media guys too #RevolutionIsNow #RevolutionNow pic.twitter.com/TtJ3EnxOZr

We are attacked by the @PoliceNG outside the national stadium few minutes some of us were arrested .#RevolutionNow#FreeSoworeNow
@segalink @adeyanjudeji@I_Am_Ilemona pic.twitter.com/YbYrTukgWF

Sowore calls for Revolution and the man who won 15m votes is trembling in Aso Rock – releasing statements about treason and unleashing security forces.

Nigeria: is this your duly elected President? 🤦🏽‍♂️😂 https://t.co/txtVie9cKh

Femi Falana is asking the Nigerian government to tell him the section of the Nigerian Constitution that finds Sowore guilty of treason. He also has a sub for someone we all know. #RevolutionNow #FreeSowore

Nothing could be more daft! Of all the actions to take against a constitutionally and legally backed protest, the last should be an arrest of the convener. #FreeSowore

We comdemn the arrest of our national Chairman, Omoyele Sowore, by the DSS & Nigerian Police for leading the #RevolutionNow movement for a more progressive, prosperous and peaceful Nigeria. We join millions of Nigerians to say NO to oppression and injustice! #FreeSowore

A government that arrests a man planning protests is a government running scared.

Make no mistake, Nigeria's thieving rulers are very aware that if the people ever rise up, they are done for.

What they fear most is a Nigeria that does not fear them.#FreeSowore #RevolutionNow

They say #RevolutionIsNow but I laugh.
If only they knew they are pawns in Sowore's personal battles

How can Buhari's administration be revolted on by the same people who Sowore agreed credibly voted for Buhari?

We Igbos will not be fooled.
Police please hound up the proteters

I just got onto Twitter and i see#FreeSowore trending. As in this administration is so daft that it actually arrested Yele Sowore for organizing a protest #RevolutionNow !
When the person that should be arrested is Muhammadu Buhari @MBuhari for overseeing the deaths of Nigerians

Earlier this week, Nigerian on air personality (OAP) and vlogger Toke Makinwa took to social media to call on travel companies to sponsor a girls trip she plans to take when she turns 35 in November.

*Temp Post*
PSA 📣 📣📣.. Calling on all travel companies, let’s make magic together this November, I turn 35 and I want a solid girls trip to my dream destination Phuket – Thailand 🇹🇭
I want to wake up to the sounds… https://t.co/X2uIWDJqyC

Here are a few reactions to the post on social media;

Toke Makinwa is putting that bill on one ‘somebody’. This life.

How is this begging?

Lmao, you don't know waiz going on. You will be surprised how much travelling Companies will give to be a part.

Are people really ignorant about influencers and how that business works or they're just hating cos it's Toke?

Cos idg these bambiala gist?

Are you people ok at all?

Look at grown men, falling over themselves in the replies to try and shame Toke Makinwa who has 2.9 million followers on Instagram.
If I had a travel company, I will sponsor that trip, have them curate luxury vacation content and advertise the hell out of it. https://t.co/FwvnYoCyXR

I won't even be slightly shocked if after all this outrage, some company decides to sponsor Toke's birthday trip to Thailand.

Toke Makinwa is making strategic moves. She will get the sponsorship, and even get paid to travel. Social media influence is a viable. You can do many things with it, make money, get jobs, get free products and sponsorship. I have been invited to 5 countries on here.

Wait people don't know that Toke's tweet is a publicity stunt? LMAO its all staged boo and one travel company will comment and act like it wasn't all arranged. It's the age of publicity so appreciate don't hate.

Leave Toke alone! Think about your own life, are you living in the right way?

The accounts were said to contain a total of ₦9.9 billion.

The easiest way to become a billionaire in my country is to become a political office holder.

Ambode who was a career civil servant all through his active service years, until he got handpicked to become a single term of 4years governor has almost N10bn in his bank account.

How we don't have systems in place to prevent this amount of money from being moved to random accounts amazes me! Bank sef must explain itself..

I heard Buhari govt froze Ambode Account just because of decamp rumor.
If you are still shouting anti – corruption war, u are daft

All of you that were praying #Ambode gets on a list in this cabinet, your prayers have been answered, he is now on the #EFCC list.

Lol; but Ambode has been very silent since he lost the second term bid; why deal with him this way. https://t.co/xAH57sERt5

I feel sorry for Ambode. He must have stepped on big toes, big time. Even after suffering a humiliating defeat/exit from Govt, they still want his head on a platter.💔 https://t.co/NWt3EsahL6

The problem is when you decide to join politics to change the system, but the system changes you. Or the system brings out the real you!

Whatever was the case, Ambode sorry oo!

Sorry Ambode, maybe you never had of the saying
"A STITCH IN TIME SAVES NINE".
you had all the time to realign & join another party.

But you were "forming" loyalty to blind Bartimaeus

Yari, Okorocha and Ambode, are all APC former Governors under the HEAT of EFCC, our DEMOCRACY is not in DANGER but wait for any of the PDP's to be under the NET and see the story CHANGE immediately on Buhari. We JOKE too much and not just READY for the nation of our DREAM!

Dariye and Nyame are already in prison.

Buhari spares nobody even members of his Party. @MBuhari @officialEFCC

So EFCC is chasing Ambode/Yari despite the fact they member of APC. Who says Buhari is partial in his war against Corruption ??

Tinubu definitely has a hand in this

The bourdilion landlord has his fingerprint on everything happening to that guy. Ambode is about the dumbest politician in history.

Welcome to Lagos state, when u fall out with Tinubu, EFCC will knock at your door. Ambode it's your turn 😂😂😂, enjoy while it lasts. https://t.co/vOSGMET8Ny

Yari, Okorocha and Ambode, are all APC former Governors under the HEAT of EFCC, our DEMOCRACY is not in DANGER but wait for any of the PDP's to be under the NET and see the story CHANGE immediately on Buhari. We JOKE too much and not just READY for the nation of our DREAM!

The fact that Ambode is trending and people are asking ignorant questions while others are applauding Buhari's anti-corruption war against #APC members show that NIGERIANS ARE POLITICALLY AND INTELLECTUALLY IGNORANT.

EFCC is freezing Ambode’s Bank Account but Aregbesola that throws Osun into eternal debt is about to be made a minister. IRONY🤣🤣🤣

Two Kenyan rugby players Frank Wanyama and Alex Olaba have been found guilty of rape by a magistrate court in Nairobi. The duo was charged to court in April 2018 after they were accused of gang raping musician Wendy Kemunto in one of their residences.

UPDATE: Frank Wanyama and Alex Olaba Sentencing will be on 16th August at 2pm. Meanwhile court says the two will remain in Custody.

Sentencing of two rugby players Frank Wanyama and Alex Olaba currently happening in court. On their mitigation the defense states there was no intention on the part of accused persons.Urges the magistrate to be alive to the circumstances.

My message to Frank Wanyama and Alex Olaba as they face the wages of sin.

Acts (8:22) Repent of this wickedness and pray to the Lord in the hope that he may forgive you for having such a thought in your heart. — The Holy Bible (New International Version)

I used to think rape was for the uncouth and illiterate. But look at these guys with a good international reputation but they lay too low to obey the sinful desires of their flesh. Can we blame drugs and ignorance or just pride and madness.
Frank Wanyama and Alex Olaba pic.twitter.com/ocixiq3kQa

Imagine having a vibrant career as a player of Kenya Sevens Rugby team then letting it all go down the drainage because of hunger for sex.😥
Frank Wanyama and Alex Olaba are really going to face it rough in the 'dungeons'.

Frank wanyama and Alex olaba….Found guilty of rape. That's the consequence of alcohol and sex/women.

The rapists Frank Wanyama and Alex Olaba should go rot in jail for life! Other offenders should go get taught hell lessons in kamiti too together with rapist apologists,corrupt politicians and murderers!

Frank Wanyama and Alex Olaba, the High Court confirmed that you're https://t.co/Sxym3hhZF3 limelight couldn't save you from the forces of the law .

Frank Wanyama and Alex olaba.. will be sentenced tomorrow.. Well 20 plus years without a doubt. Don't drop the soap !!

Given that only Frank Wanyama and Alex Olaba were in a party full of liquor could it have been that the lady had ill intentions and that is why she stayed late into the night in their company. Could it be that she laced their liquor with Viagra.why was there no physical injury?

Why do they keep postponing this Frank Wanyama and Alex Olaba case???

The same menz who celebrated the Mochama ruling and said “the courts have spoken” are about to spend the whole day questioning the judgement of the same courts, which have found Frank Wanyama and Alex Olaba to be rapists.