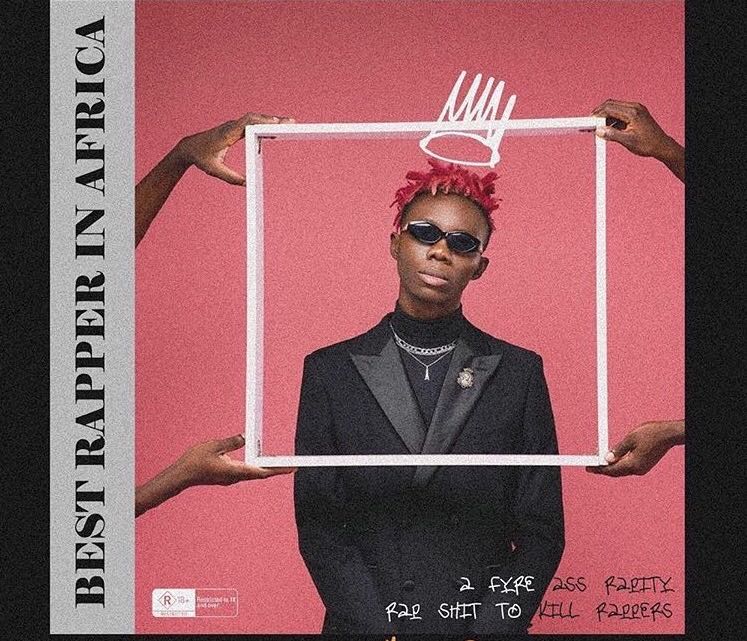 In the past few weeks, popular Nigerian rapper and Chocolate City artist Blaqbonez has continuously taken to social media to inform and remind everyone that cares listen that he is the best rapper in Africa.

If you’re hurt by the fact that I’m the best rapper in africa, so sorry there’s nothing we can do about it, it is what it is.

But these other rappers were not having it

Not the best rapper in Africa!!!!

Everyone should feel like they’re the best but then… be prepared to back all that capping up !!! It’s #BlaqFriday everything and everyone on sale 😈 @BlaqBonez Ava? https://t.co/zDHkQYvNfD

It’s about BARS not a popularity contest 😄 pic.twitter.com/BYqZSiLNnR

The weed @BlaqBonez smoked before recording #BRIA is a premium limited edition high.

Never heard a Naija rap diss that hot before.

It's crazy to see rappers who managed to step out only to get knocked out.

Not fair, Blaq. Not fair at all.

BLaqbonez is the African Eminem pic.twitter.com/87EzBNHO6C

Me after listening to #BRIA by @BlaqBonez The track is lit. Blaqbonez is not the best rapper in Africa. He is THE BEST RAPPER IN AFRICA pic.twitter.com/VF8ZzJsJe9

Blaqbonez is truly the BRIA

Blaqbonez has used delivery to top all his adversaries so far

Some have some lit bars but they’re using puns & punchlines like it’s 2006, they don’t know the game has changed + they rapping like they’re telling a story 🙄🤦🏿‍♂️

Diss tracks are meant to be intimidating/threatening

If @Blaqbonez says he's the Best Rapper In Africa, and smokes those who come after him, I dare say he is!

All this nonsense talk about "what about this person? What of that one?" nor concern me.

More rap feuds are brewing and we’re here for it

Today is my birth.. Skip that, Today is a good day to put an end to this best rapper conversation

I never said I was the best.. but whoever is coming at me had better keep it this clutch and don’t waste my time.

Blaqbonez in the diss track said tentik had 7 subs… It has reduced to 6 😭😭 one of his family members has denied him… @BlaqBonez you wicked ohh #BRIA pic.twitter.com/NHDnj2b8xr

Blaqbonez forgot to add NastyC inside that diss so that we can move to them Jcole and Kendrick.

on August 1 every year, Americans celebrate National Girlfriends Day which encourages women across the country to get together and celebrate their special bond of friendship.

As part of #NationalGirlfriendsDay, let's give a shoutout to the friends who always have our backs! My girlfriends aren’t just people I like to hang out with—though we do plenty of that—they’re a vital part of who I am and who I’ll keep becoming. pic.twitter.com/W3wmKuoi2m

But somehow, this year, on social media, the #NationalGirlfriendsDay hashtag was mostly used to celebrate female romantic partners around the world, including in America.

Happy #NationalGirlfriendsDay to You Ruth Ijeoma😍😍 You remain the best ever…check your Acc balance 😁😁💵💵💰💰 pic.twitter.com/bePPHmVss3

What's wrong with Nigeria? Its not world girlfriend day… Its national not international… Its not everything you copy… Let the US
enjoy their day. 😒#NationalGirlfriendsDay

After just a few hours, the video already garnered hundreds of thousands of views on YouTube and the views continued to grow exponentially.

Thanks to Davido for giving Chris Brown a platform

We rise by lifting others 🙏

Blow my mind for best collaboration of the year.

We’re no longer surprised by these

Wizkid fc right now waiting for kemi olunloyo to come and tell them how #blowmymind by davido and Chris brown got 1million YouTube views in 11hours pic.twitter.com/8lYjoMwKud

Then we saw this;

Davido : I have been in this industry for 7 years and nobody supported me, it’s just hate because my papa get money..na my fault? pic.twitter.com/Kz5LLtvWQo

Someone said Davido is throwing himself at Chris brown like a bitch 😂😂😂😂😂 #BBNaija #blowmymind pic.twitter.com/HXGbFOTqpB

Frank Edward should be in the same level with Wizkid and Davido but una no like God.

Barely a week after the death of Kenyan Member of Parliament Ken Okoth, the push for the legalisation of marijuana in the country has gained fresh momentum.

Before his death, the late Ken Okoth was very vocal his belief in the legalization and regulation of weed in Kenya to ensure its safe usage. And he proposed a bill to this effect last year.

"The lords of poverty are the people who refuse to think well. Get rid of cane farming. Grow marijuana. Sell it legally. Tax it. Raise money. Why is tobacco any better than 'weed'?"

Now, many Kenyans have taken to social media usind the #LegalizeIt hashtag. Here are a few reactions.

The best way to Honor Hon. Ken Okoth and Joyce Laboso is to:-

-Build a Cancer Research and Facility Centre in Every County

Annual global deaths caused by:
1. Tobacco: 7 Million deaths
2. Alcohol: 3 Million deaths
3 Marijuana: 0 deaths
Yet people will come to this hashtag to talk about how weed is dangerous. Ignorance is killing us #LegalizeIt

Legalizing Marijuana will raise a lazy generation and will bring a lot of chaos among the youths. We cannot go that way, let's rethink #LegalizeIt pic.twitter.com/1O2tHXih0c

Y is anyone thinking marijuana cures cancer and people are still dying of cancer? Bring case studies on the table coz Ken Okoth and others wouldn't be stopped by law from saving their lives. Don't #LegalizeIt

If we decide to #LegalizeIt for recreational use, then we must also be ready to establish more rehab centers,and with it, allocate more funds that would av otherwise been put on tackling cancer itself on rehabilitation of addictees.

Most if not all people jumping on this weed legalization bandwagon don't understand it or its effects. In countries where weed is legal there is proper regulation of it's use. But supporting weed smoking out of euphoria is wrong #LegalizeIt

We should only #LegalizeIt when it is to be used medicinally. Recreational Marijuana is a no no. Tobacco smoking is harmful as it is. We wouldn't want another burden on our health and rehabilitative facilities.

"Taking cannabis out of the hands of street dealers and putting it behind the counter in shops with security guards and ID requirements would help protect those under 18.”https://t.co/WRVBGaQTZV#MedicalCannabis #LegalizeIt #Regulation #cannabinoid #CannabizWorld #CBD