Social Media Roundup: On to the round of 16! 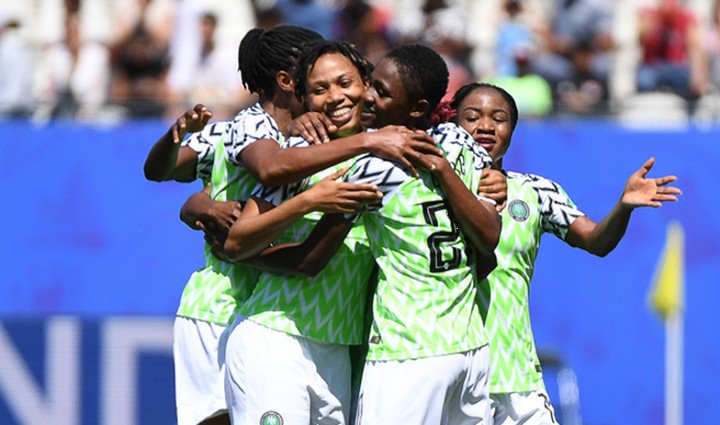 Yesterday, the Super Falcons, Nigeria’s women national football team confirmed their spot at the round of 16 stage of the ongoing Women’s World Cup. They had to wait three days after their final group game on Monday to know their fate.

With results going the way of Chile and USA tonight, Nigeria have confirmed their spot in the round of 16 at the #FIFAWWC

What a night for Africa who will have both Cameroon and Nigeria in the next round 🇳🇬🇨🇲 pic.twitter.com/UVh4rnkpzd

The exact moment that the @NGSuper_Falcons realized their #FIFAWWC dream is far from over as they qualify for the round of 16 🇳🇬 https://t.co/pvAcMZerHX

Having narrowly finished third place in Group A behind France and Norway, the Super Falcons are said to be proceeding the next stage of the competition for the first time in 20 years; since 1999 in the US.

The Super Falcons and their Cameroonian counterparts; the Indomitable Lionesses are the only African teams that qualified for the round of 16 stage of the competition.

Here’s how Nigerian fans reacted to the news.

OFFICIAL: The Super Falcons of Nigeria have qualified for the Round of 16 at the 2019 #FIFAWWC.

Our sisters are doing great and we are proud of them.

Na original Naija DNA of excellence we carry for body.

I'd like to start by congratulating the Super Falcons on the qualification. After they were robbed of the next round by VAR.

The Nigerian team will face Germany tomorrow at its first match in the round of 16 stage. Many Nigerians are not very optimistic about it.

So after all this congratulations Nigeria we are meeting Germany next ?

It's time for our country men in edo to do something about the girls from Germany. Falcons can't loose o! pic.twitter.com/t0sjlJaLuu

Nigerians getting excited about qualifying for the next round then they remember they face Germany on Saturday #Team9jaStrong #CongratulationsTeamIMPOSIBLE pic.twitter.com/bJvKkSthST

After all the Prayers for Super Falcons to qualify, Na Germany wan jam us. We for kuku no qualify. SMH

Thank you Thailand, we will continue to buy your rice.

After 4 days of mathematical permutations, the super Falcons qualifies for the round of 16 at the ongoing FIFA WWC!

Isn't it rewarding to be a mathematician?

The God of last minute wonders , that turned it around for the Super Falcons when we least expected it , He will be my God.

Kwesi Arthur is trending in Ghana

Ei Kwesi Arthur that was harddd! 🔥👊🏿

Kwesi Arthur is just too hot. His mood decides if he should sing or rap😍😂

As kwesi Arthur dey do You people no go call am bragging , Sark do p3 he dey brag too much … that be why Gh dey where Edey no. Constant nkwasiasem saa

Kwesi Arthur is one of my favourite artiste top 3 in Ghana, but this rap is overrated asf, it's good but overrated. Still talking about struggle and enemies, something we've heard over and over again. Same shit from 1 to 4. Sarkodie remains the King and Medikal, Jack.

People will start like this, “when Kwesi Arthur said this and that I felt that”. My friend, who are you lying to?

On Wednesday this week, Nigerian businessman and philantropist Femi Otedola took to Instagram to announce the sale of his 75% shares in Forte oil. He is leaving his role as chiarman of the company to focus on Geregu Power Plc, a power generation company he’s said to have been running since 2003.

Businessmen like Femi Otedola are too smart, He sold the Ownership of Forte oil to Invest in Power.. The world is migrating from oil to Power. Dangote would regret why he invested in refinery.. World powers now are trying to adapt to the use of Electric cars. pic.twitter.com/UtPLf8LIhb

Femi Otedola owned 75% of all the shares in Forte Oil.

The whole of Forte Oil is said to be worth 125million Dollars. I saw a Forbes article that he sold his shares for 250million dollars.

He now moves to invest in Power.
This man is definitely very brilliant and futuristic.

Smart business move by Femi Otedola in selling his Forte Oil shares. I guess he's recognized that the world is rapidly moving away from fossil fuel and this is probably the best time to bow out of the industry.

75% of Forte Oil's shares were owned by Femi Otedola before the sale.

Widespread view, is that its a smart move. In my opinion its more brave than smart.

Electricity would improve in Nigeria if many of our billionaires would just invest in power firms, instead of oil and imports. Femi Otedola invested $350m into power in 2018, but felt that was not enough, and he has now invested all his billion dollars into improving electricity.

I just heard that Femi Otedola sold his priceless asset (forte oil),I must admit that i missed out on that one.